Partying like it was 2020, virtual graduates return for an in-person celebration 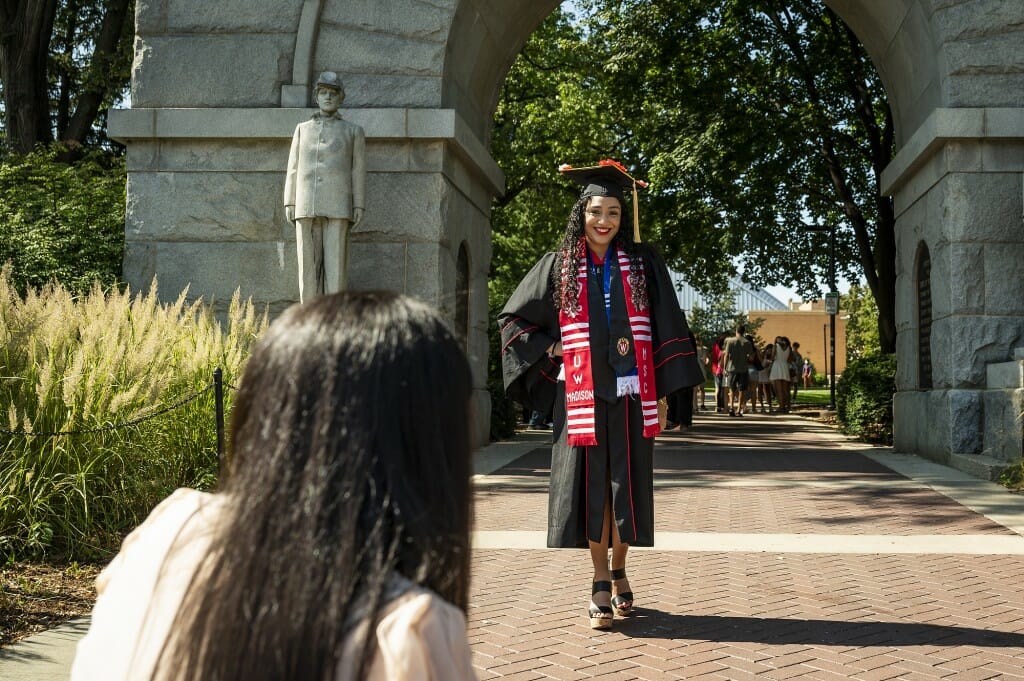 Graduate Reichell Solis takes a photo at the Camp Randall arch prior to the celebration. Photo by: Bryce Richter 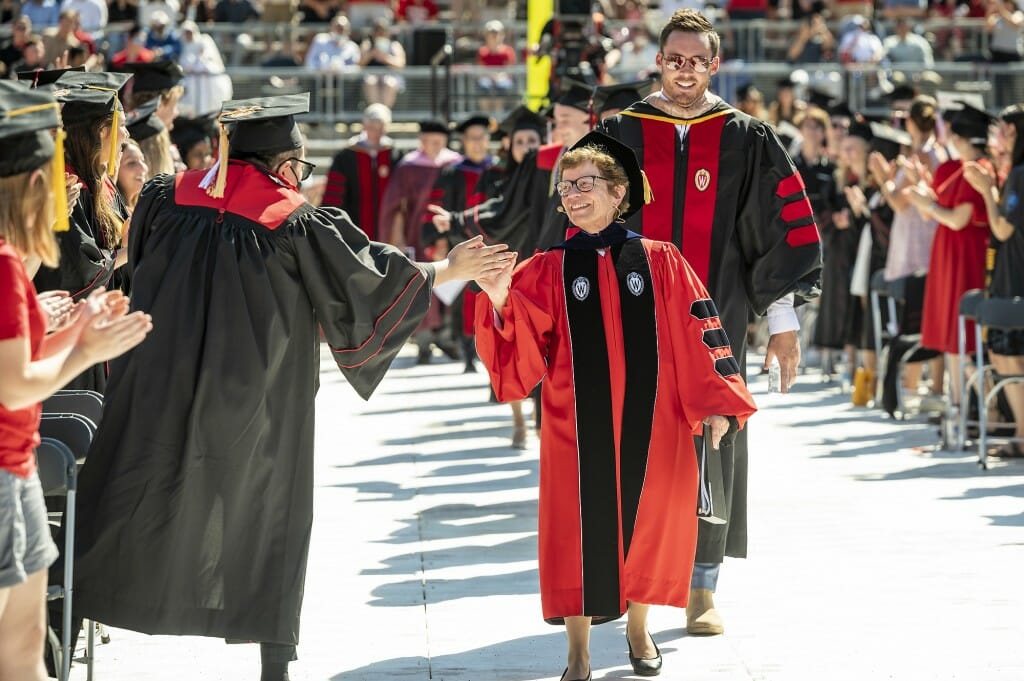 Rebecca Blank says some of the happiest moments in her time as chancellor have been celebrating Commencement at Camp Randall with graduates and their families. Photo by: Bryce Richter 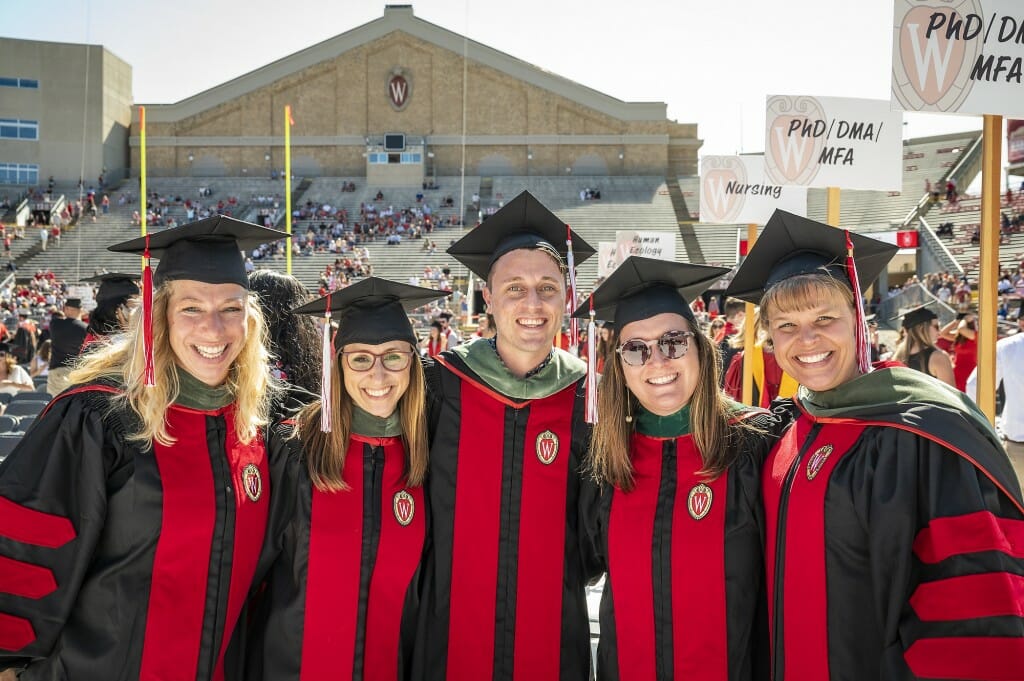 Many participants opted for the traditional cap and gown, even though it was not a traditional commencement. Photo by: Bryce Richter 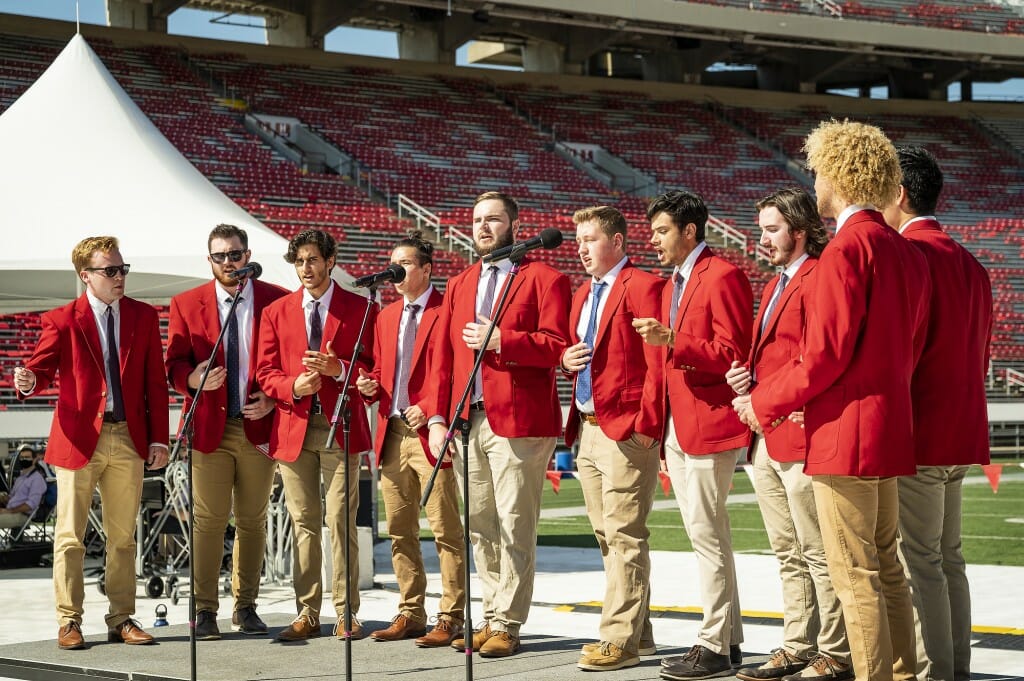 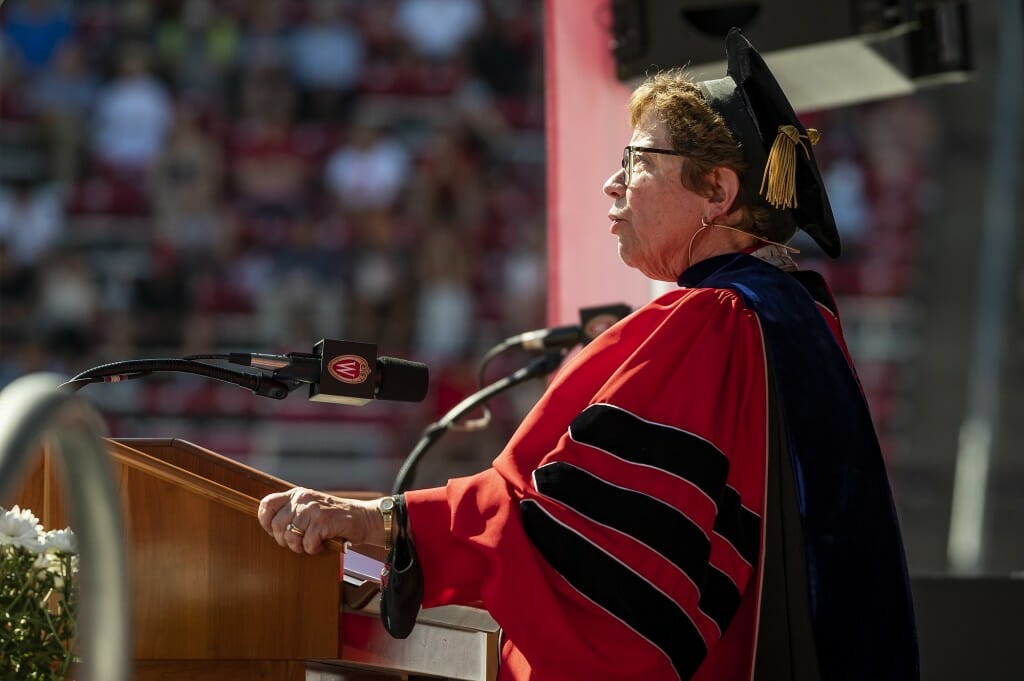 Chancellor Blank welcomes the Class of 2020 back to campus. Photo by: Bryce Richter 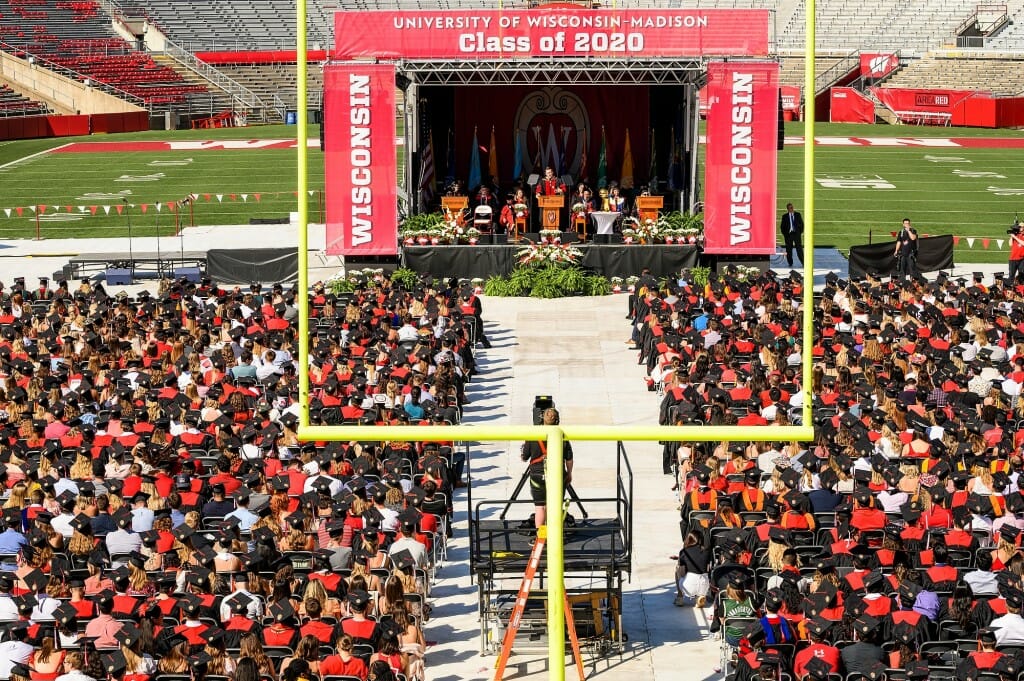 The event was scheduled after UW–Madison’s Spring 2020 in-person commencement ceremonies were cancelled due to the COVID-19 pandemic. Photo by: Jeff Miller 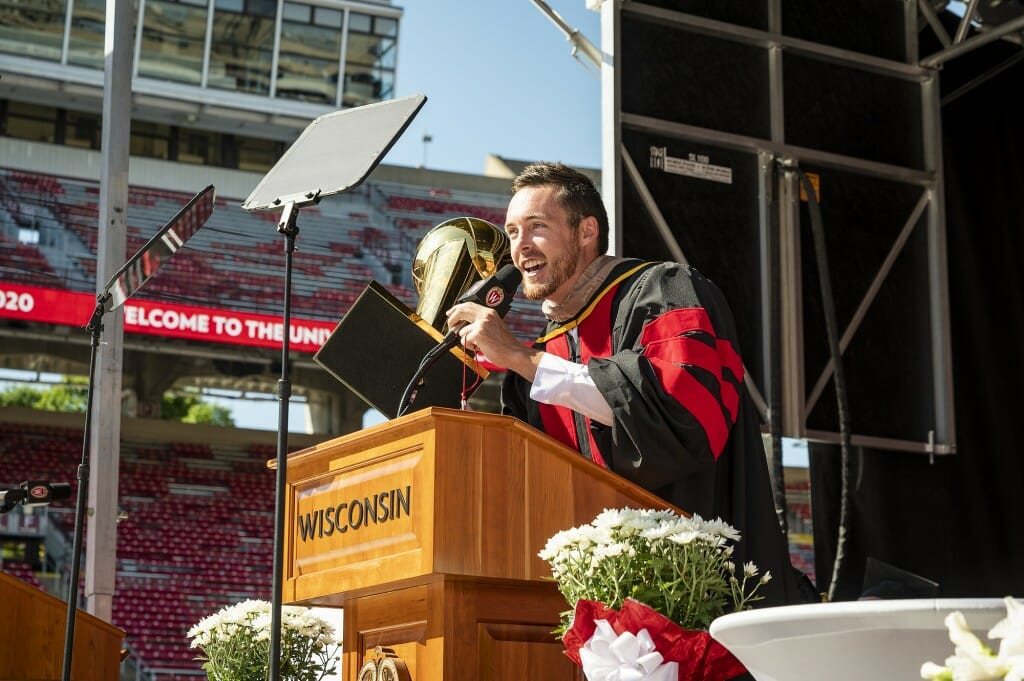 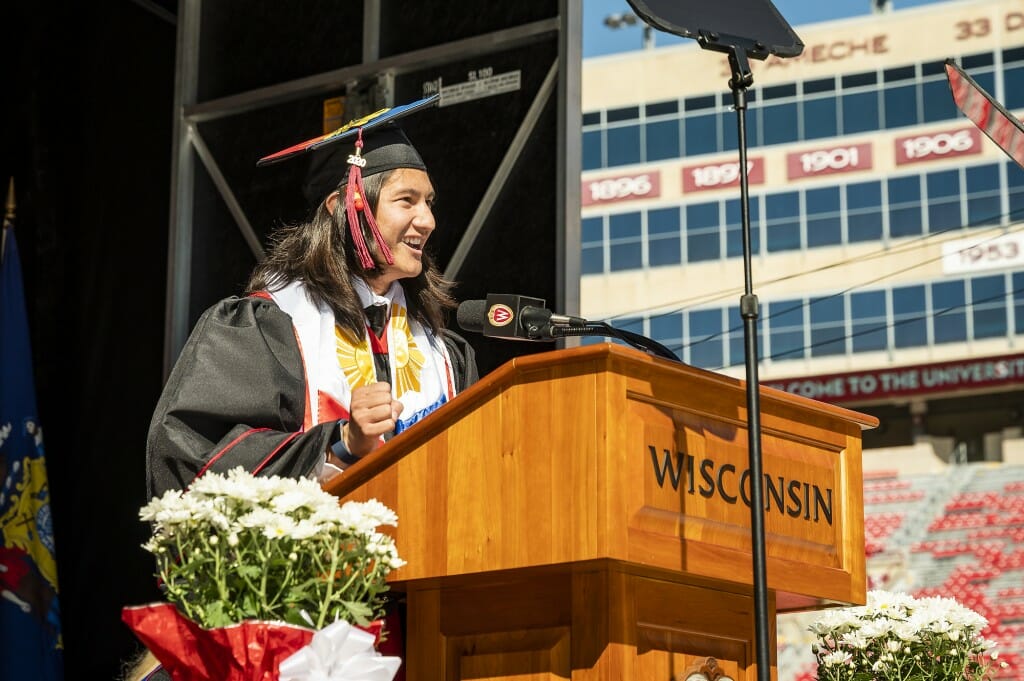 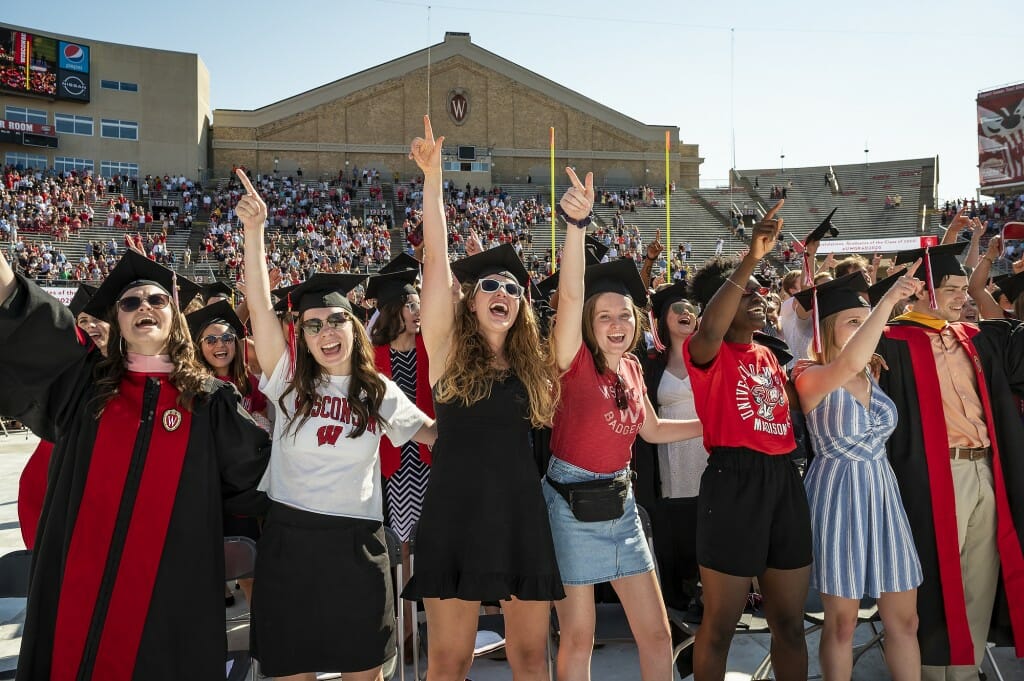 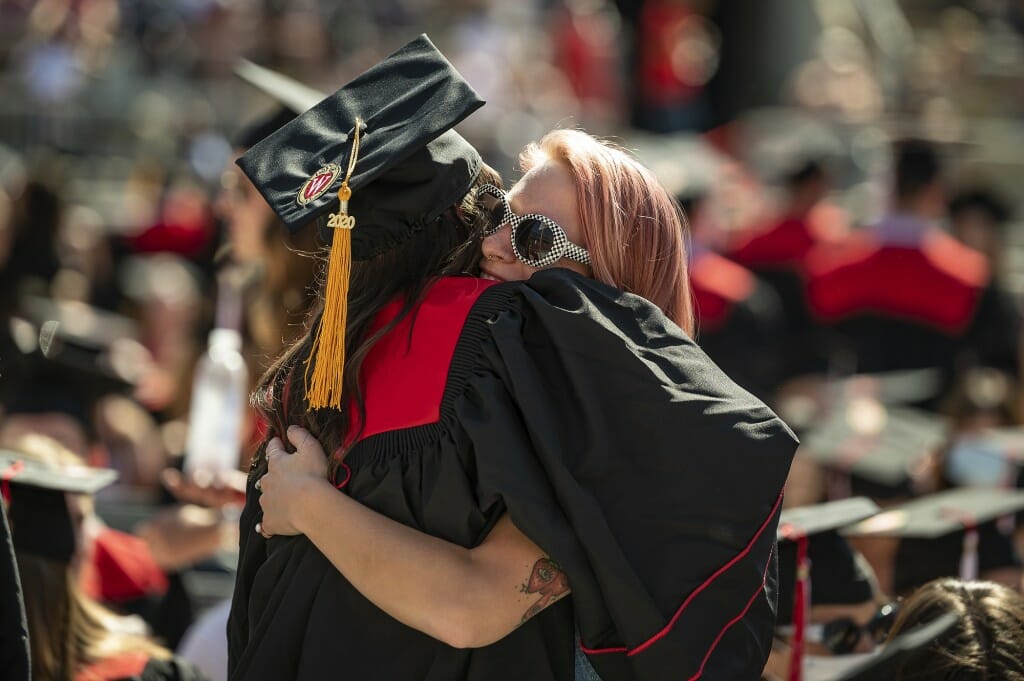 An emotional moment as two graduates embrace during the ceremony. Photo by: Bryce Richter 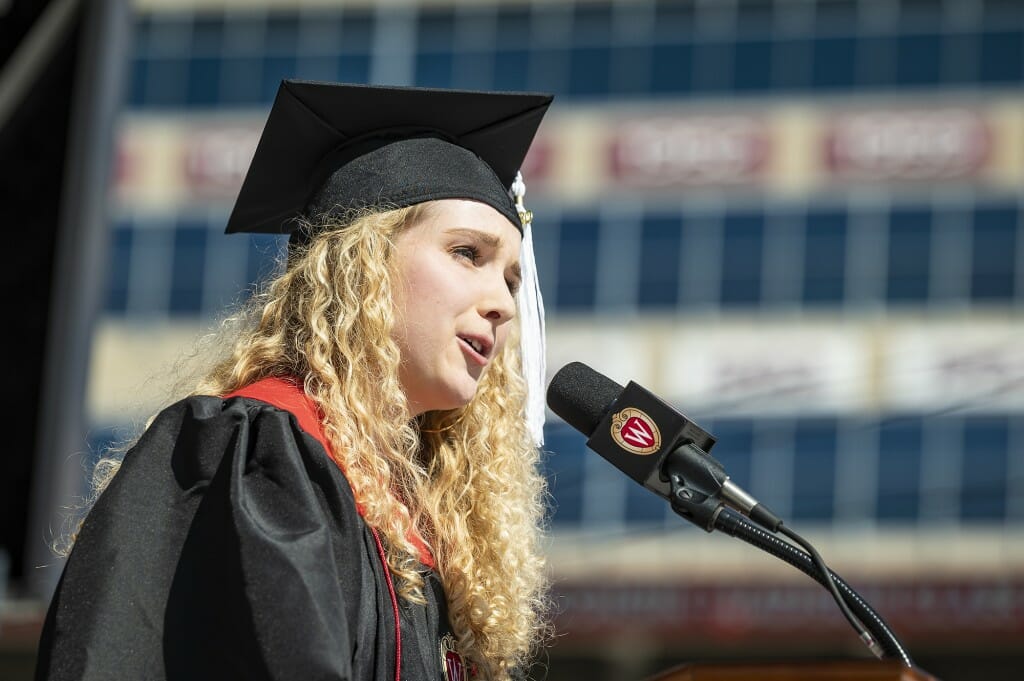 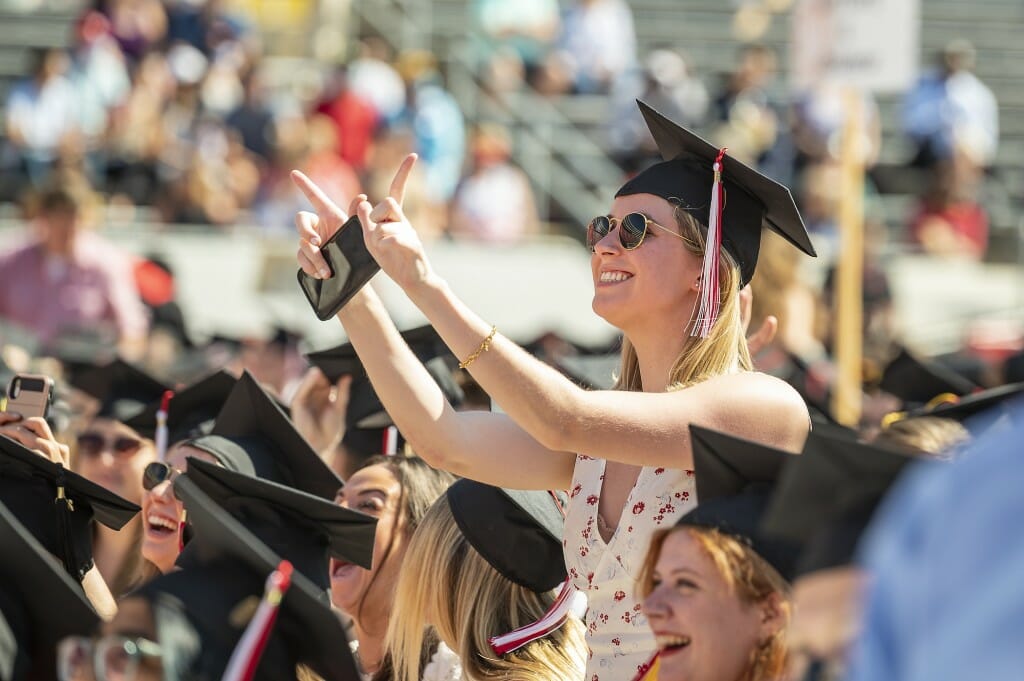 A participant shows her Badger pride. Photo by: Bryce Richter 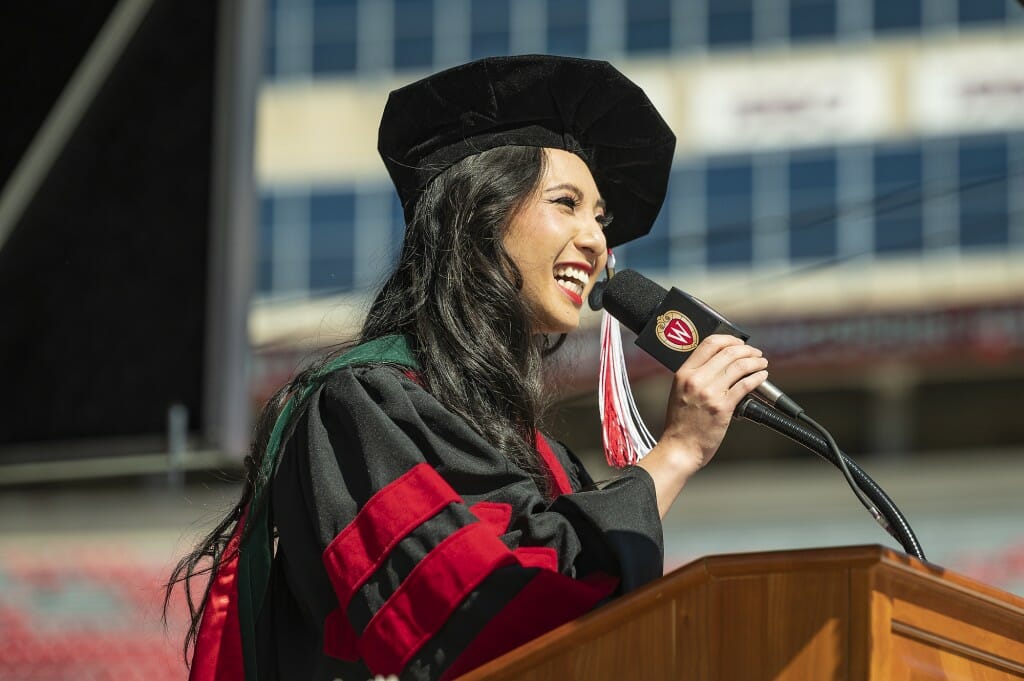 Katarina Nguyen, who graduated as a doctor of medicine, speaks to the class. Photo by: Bryce Richter 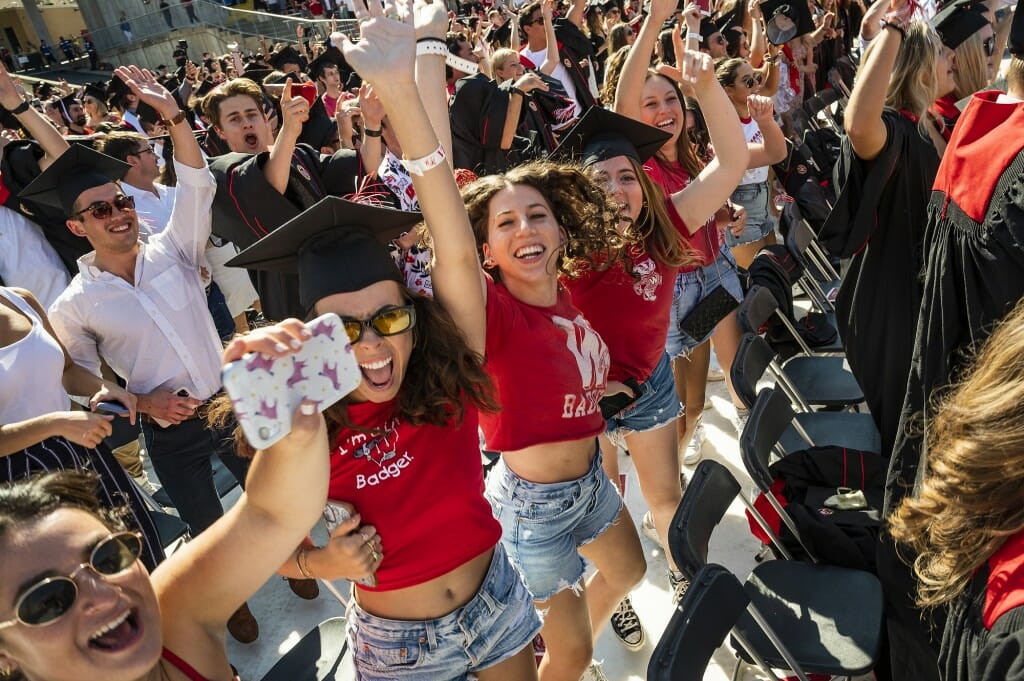 Graduates celebrate to the fan favorite "Jump Around." Photo by: Bryce Richter 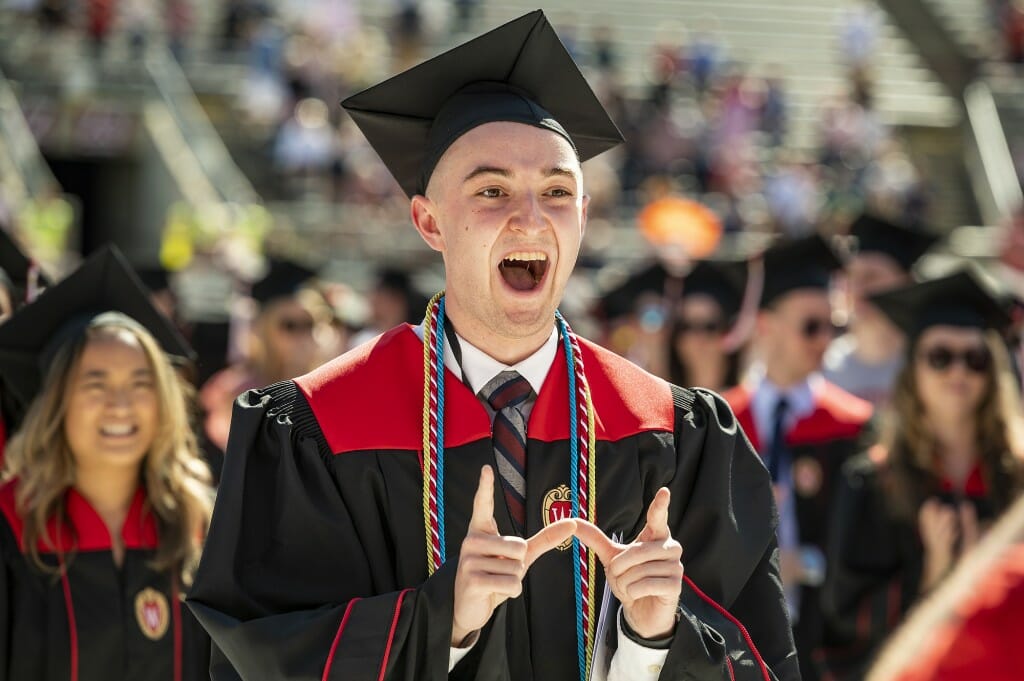 Even after a year's delay, the 2020 graduates could not contain their glee. Photo by: Bryce Richter 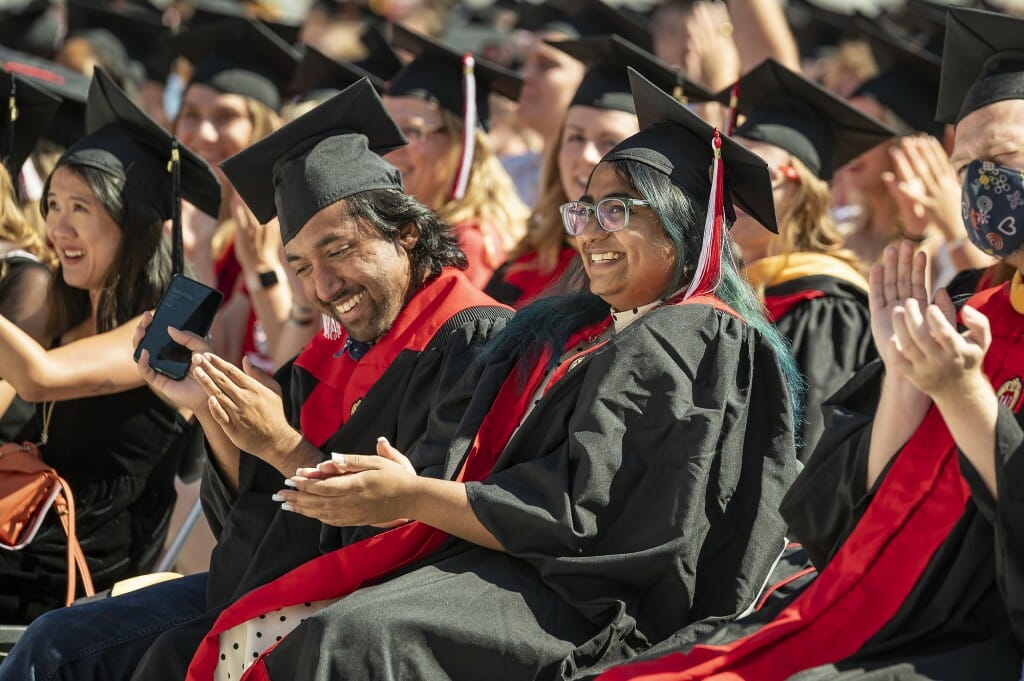 The Camp Randall festivities highlighted a series of in-person events honoring the Class of 2020 throughout the weekend. Photo by: Bryce Richter 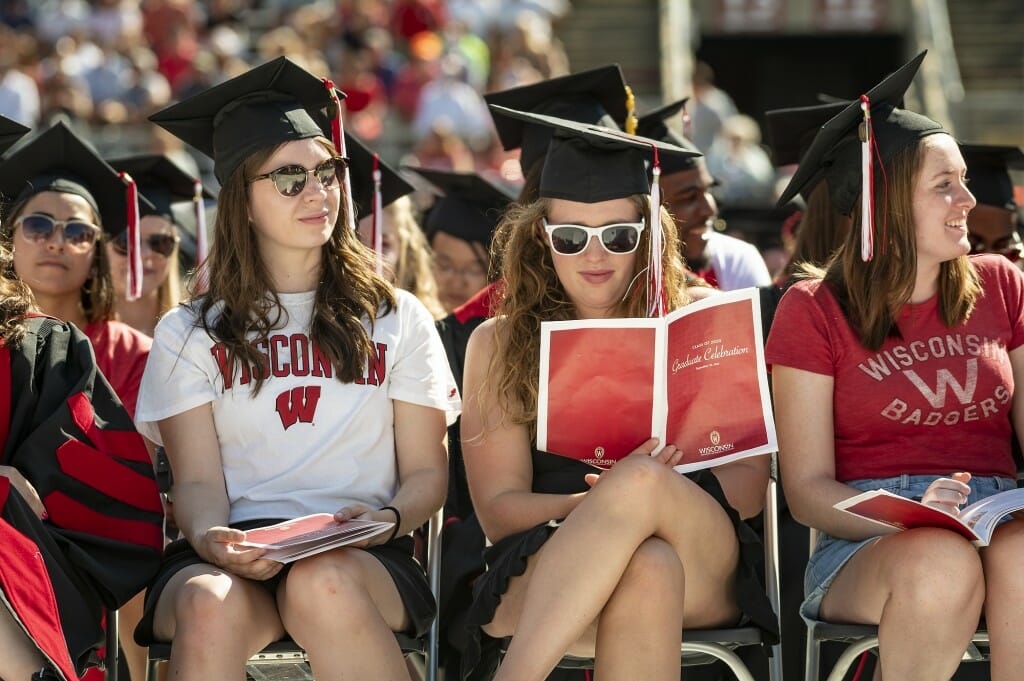 Graduates follow along with the official program. Photo by: Bryce Richter 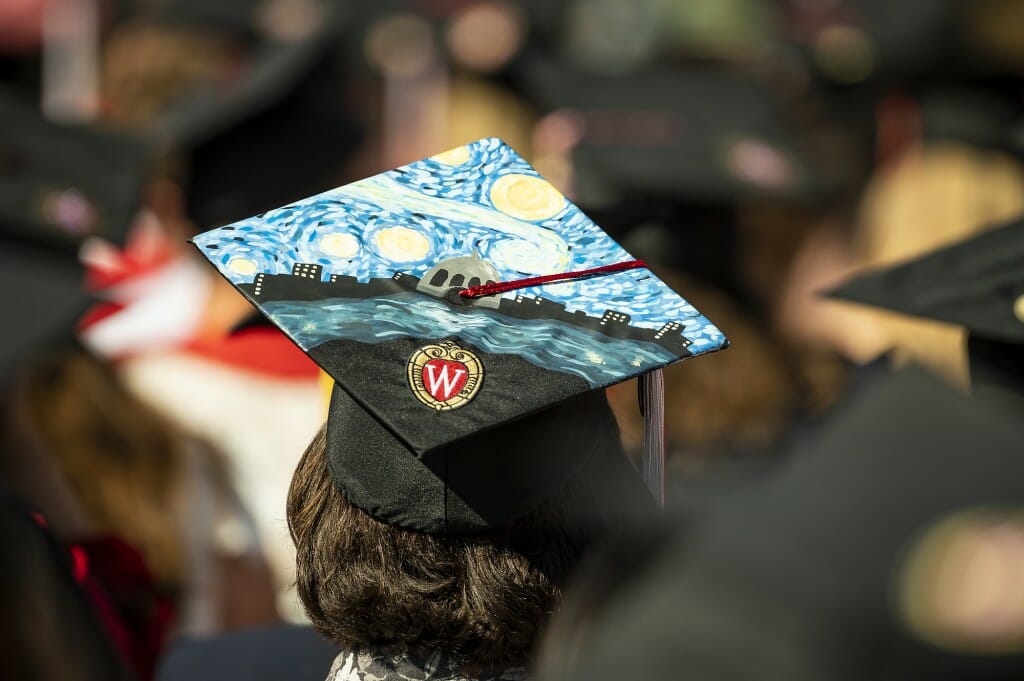 On a brilliant, sunny day, at least one graduate was looking forward to a starry night. Photo by: Bryce Richter 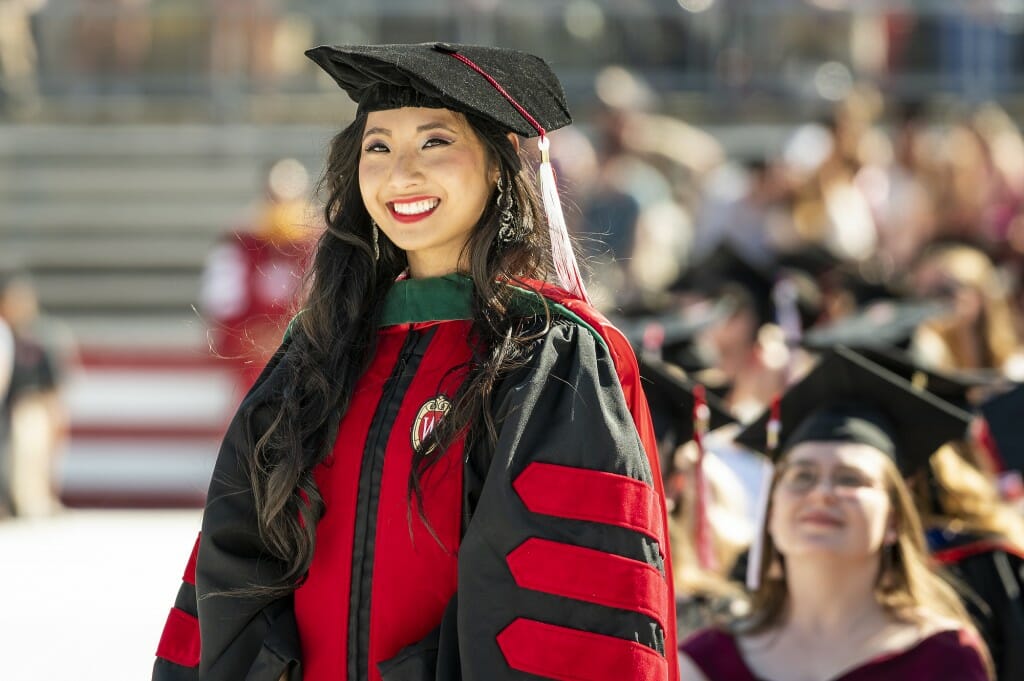 Graduates stand during the recognition of degrees. Photo by: Bryce Richter 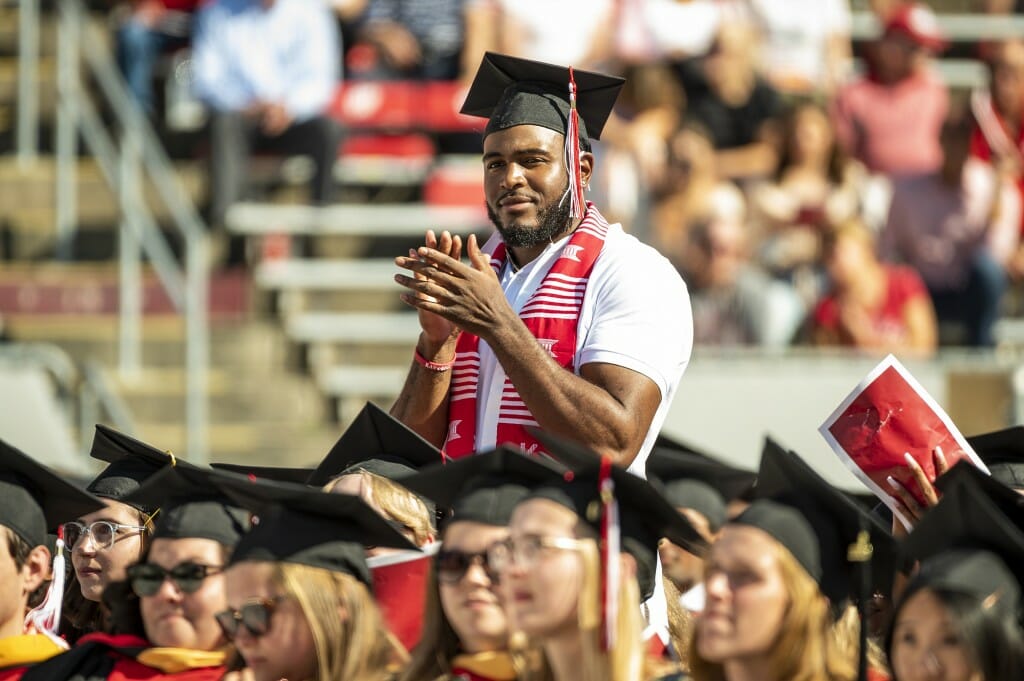 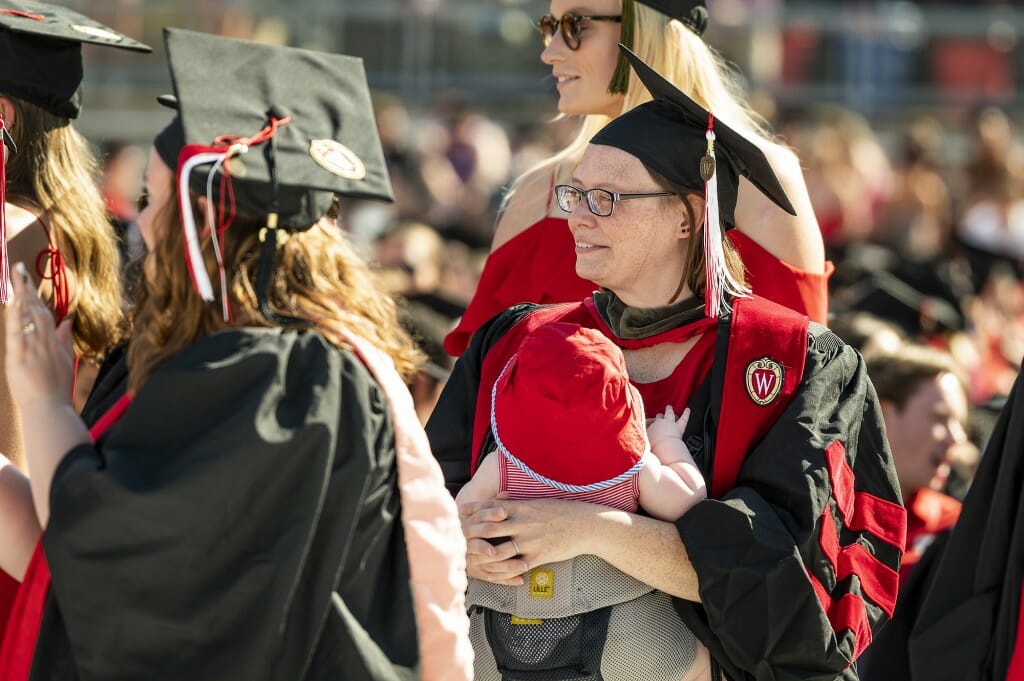 A graduate with a baby celebrates. Photo by: Bryce Richter 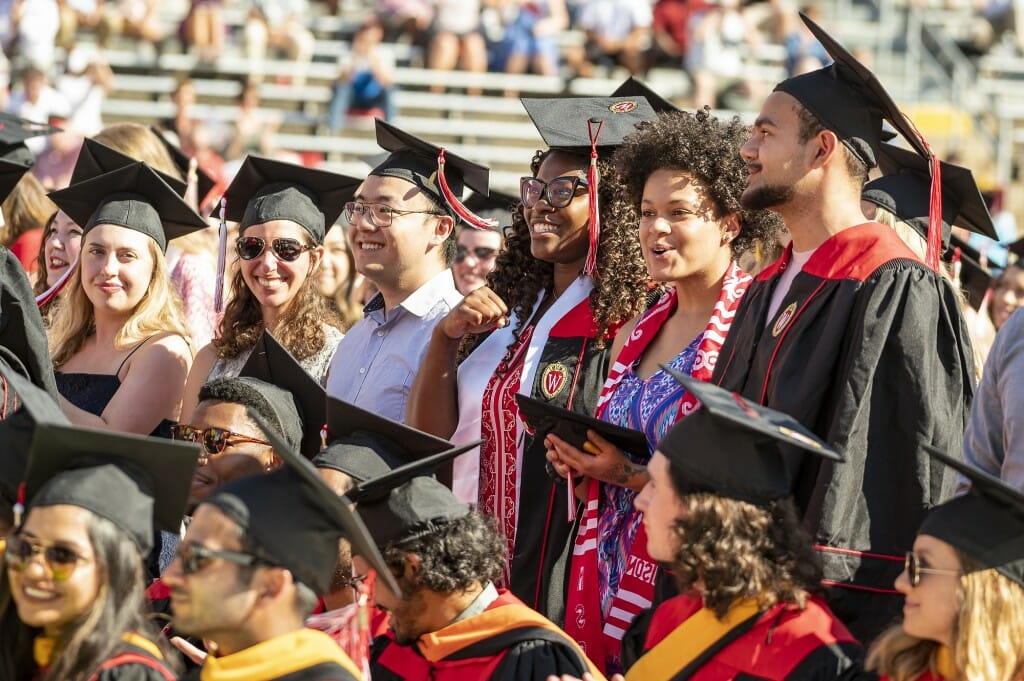 Although degrees were conferred virtually last year, Saturday's event had many of the celebratory elements of a traditional commencement. Photo by: Bryce Richter 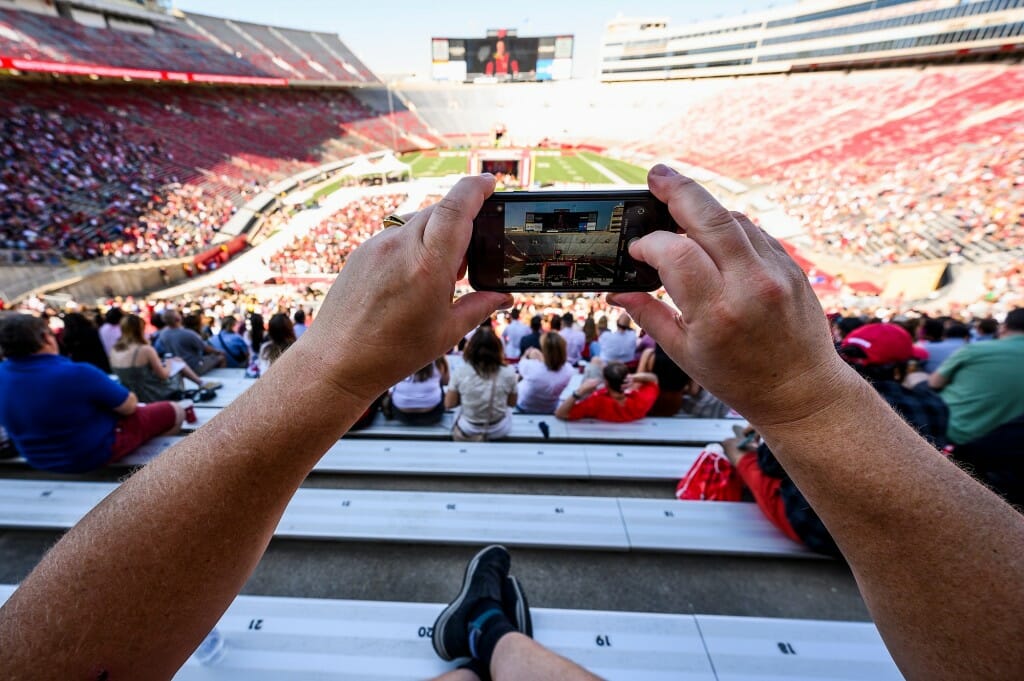 A spectator takes it all in for posterity. Photo by: Jeff Miller 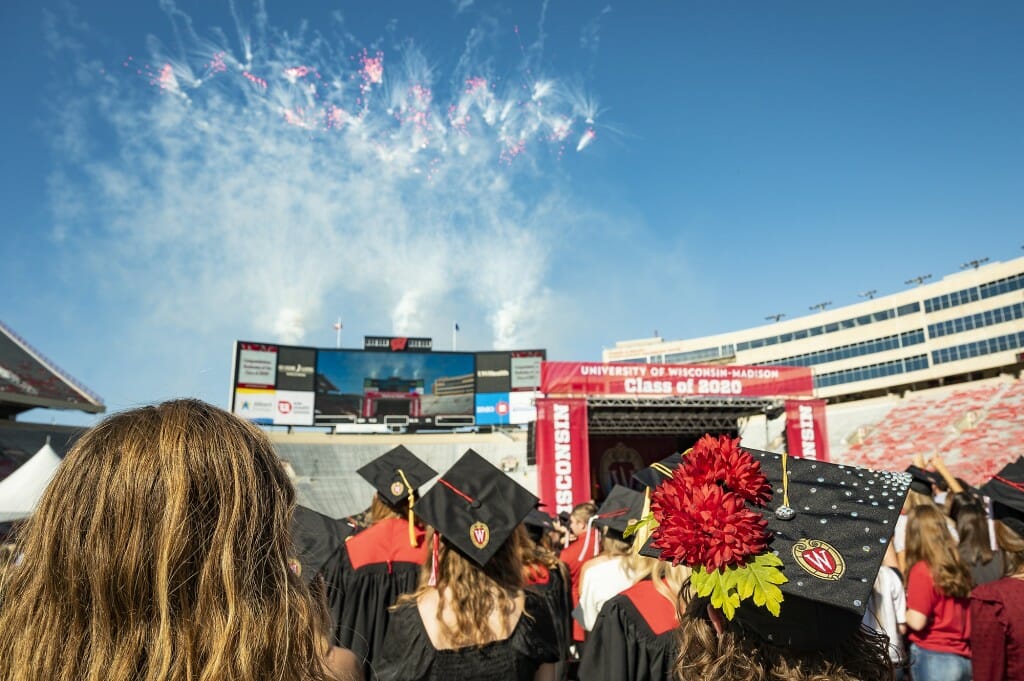 Fireworks mark the end of the celebration. Photo by: Bryce Richter 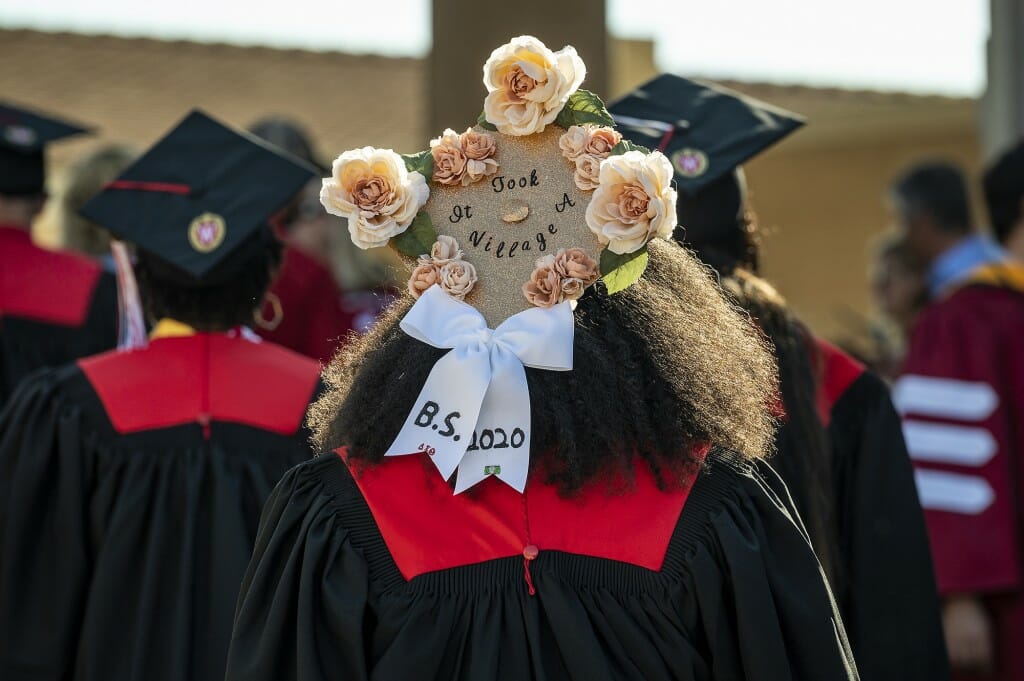 Turning back the clock, the Class of 2020 (finally) got its Camp Randall moment Saturday.

On a gorgeous September afternoon, about 2,700 graduates of spring, summer and winter 2020 — a little over 25 percent of the total class — swarmed the stadium for an in-person celebration, something taken from them by the pandemic. Thousands of friends and family members joined them, for a total crowd estimated at 8,125.

“Class of 2020, after the strangest and most difficult year-and-a-half many of us have ever experienced, it feels great to be able to say: Welcome back to campus, welcome back to Camp Randall Stadium, and congratulations on your graduation from the University of Wisconsin–Madison, one of the top public universities in the world!” Chancellor Rebecca Blank told the crowd.

Katie Pilarski, a 2020 pre-med graduate from Chicago, wore a full cap and gown and couldn’t help breaking out in dance just prior to the program.

“There are so many more people here than I expected,” she said. “Even if it’s a little weird and unconventional, it’s nice to come together and show some Badger pride.”

The Camp Randall celebration was part of a weekend of free events intended to give the class of 2020 some of those special campus moments they missed. Graduates also were invited to an ice cream social on the Memorial Union Terrace Friday evening, an exclusive concert at The Sylvee Saturday night, and a strolling brunch at Alumni Park Sunday.

“It feels like I’m a freshman again — the same excitement, the same school spirit,” said Carly Szot, who returned from Naples, Florida, for the weekend.

Many 2020 graduates traveled great distances to take part, now as alums — Diana Li came from San Francisco (“It’s nice they’re still thinking of us”), Edward Cao from Jacksonville, Florida (“It gives you a little bit of closure”), and Evan Holmes from Phoenix (“I feel old”).

Amanda Oelke of Madison remembers watching this past spring’s in-person commencement for the class of 2021 and feeling a pang of jealousy.

“They got to be at Camp Randall, and I had to sit in my basement in my robe watching virtual commencement with my mom and dad,” Oelke said. “I’m glad the university is doing this. It recognizes the time and effort I spent here.”

Related: Photos of other Class of 2020 events

Although Saturday’s celebration at Camp Randall was not an official commencement (degrees already were conferred virtually last year), the event had many of the same celebratory elements — and a bit more of a party feel.

Keynote speaker Pat Connaughton of the NBA champion Milwaukee Bucks contributed to the good vibes. He told the crowd he was feeling a little nervous going into his speech, so he brought along a two-foot-tall friend to calm him. He then surprised the audience by hoisting the Larry O’Brien NBA Championship Trophy, won in game 6 by the Bucks in July.

The crowd roared, breaking into chants of “Bucks in 6! Bucks in 6!”

Connaughton said he’s surrounded every day by “superhumans” in the NBA who excel at what they do. He’s learned a few things from them: set goals, maximize your daily 24 hours, be present, build your network, be humble and work hard.

“And if you remember anything out of this whole address, remember this: We all have the potential to be superheroes in different ways, but it’s the journey that makes it worth it,” he said. “The superheroes I’ve witnessed over the last decade, they didn’t focus on the results. They focused on the process of getting better at their craft, being better people, and enjoying the journey — on a daily basis.”

“I’m surprised by how emotional it’s been,” said 2020 graduate Katie Innis of Madison. “It finally feels like my college experience is complete.”