From the day Kehinde Wiley and Amy Sherald were announced as the artists charged with painting former President Barack Obama and First lady Michelle Obama, Leslie Smith III waited in suspense for the reveal.

“I was both surprised and amazed with the finished paintings,” says Smith, an associate professor of painting and drawing at the University of Wisconsin–Madison. “They both undoubtedly exhibit the nuances of each artists’ current studio practices while remaining sensitive to specific archetypal characteristics of both President Obama and Michelle Obama.” 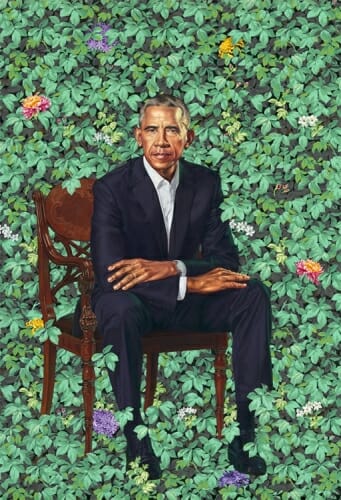 The former first couple’s official portraits were recently unveiled at the Smithsonian’s National Portrait Gallery in Washington, D.C. While other presidential portraits have been more straight-forward, the portraits of the Obamas have drawn attention for their much less conventional style.

“It is the modesty of Wiley’s painting of Obama that I enjoy. It exhibits a different and timely representation of Black masculinity. His painting of Obama includes subtle signifiers of his past, including specific flowers from Kenya, Hawaii and Chicago,” Smith says. “I enjoy that the symbolism is not didactic or overwhelming. I am most intrigued by Wiley’s choice to obscure the ground Obama’s feet are planted on. Confusing the placement of the horizon-line flattens the foreground of the painting, making it appears as if it could be perceived as background or foreground. In effect giving Obama a majestic presence. As if he were levitating in the moment captured by Wiley’s painting.”

Sherald’s painting of Michelle Obama shows her in a flowing, patterned dress with a halter neckline, with a thoughtful expression on her face and chin resting on her hand.

“The composition is monolithic. Michelle sits amongst a clear blue sky resembling the fortitude of Washington D.C.’s most historic monuments. Perhaps signifying an ideal in response to the overlooked roles of Black feminine identities in America’s history,” Smith says.

Wiley and Sherald are the first African-American artists to have been commissioned to create official portraits of a President and First Lady, both of whom chose the artists. The choice of artists is something that reflects the outward embrace of art and culture by the Obamas and speaks to their legacy of inclusion and equity, Smith says. 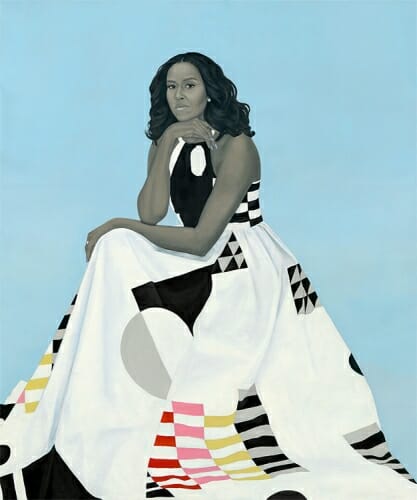 “Commissioning Wiley and Sherald in this capacity reflects the Obamas’ intentions to bridge Americas cultural divide in as many ways as possible for future generations. Both artists are now historicized as being the first, of hopefully many, artists-of-color to be considered in this regard,” Smith says. “Due to who they are as artists and people these paintings are political. It’s hard not to focus on this when understanding why these paintings and their subjects are significant in a broader contemporary dialogue. The context of our National state of being is intrinsically connected to the role of artists. I think both artists excelled at navigating that terrain.”

The National Portrait Gallery was authorized and founded by Congress in 1962 with the mission to acquire and display portraits of “men and women who have made significant contributions to the history, development, and culture of the people of the United States.”

Over the years the collections, which were initially restricted to paintings, prints, drawings, and engravings, have grown to over 23,000 items in all media, from daguerreotypes to digital. In the late 1990s, the Portrait Gallery began commissioning portraits of presidents, beginning with George H. W. Bush.

Smith sees these latest portraits as something his students can learn from.

“These are two paintings that evoke dialogue and communicate to a myriad of people with vastly different experiences,” Smith says. “I want students to understand the significances of crafting an art object as being equally important to the choice of material they choose to use.” 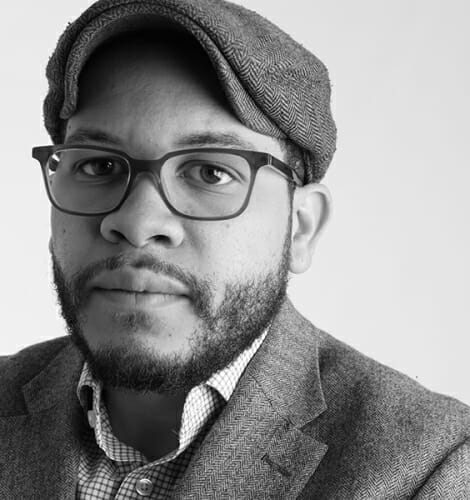 While it’s impossible to know how these paintings will influence artists in various stages of their careers, Smith says, it will impact aspiring artists and those looking to museums to highlight the artistic contributions to society by minority and historically disenfranchised communities.

The unconventional nature of the portraits has drawn criticism from some, but that’s the same reason others, like Smith, are applauding.

“Like all great art, it offers a time and a place to pause, be challenged and reflect on how you engage the world in hopes of expanding your understanding of yourself and those around you,” Smith says. “They are a shining example of how the arts and humanities are essential conduits for presenting positive opportunities for shared experiences that foster cultural growth and understanding. In a time where the arts and humanities seem to be taken for granted, I hope the interests around these paintings and these artists help us find ways to continue supporting the arts.”