Nursing pioneer Signe Skott Cooper: From the farm to the battlefield 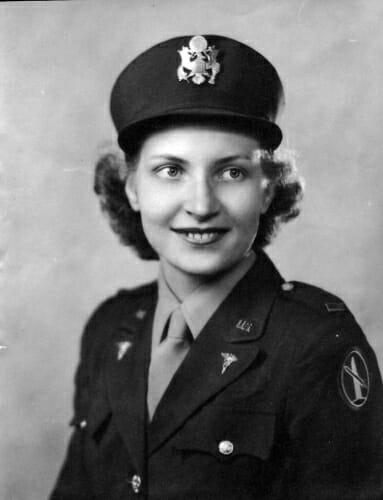 Scrub typhus – also known as tsutsugamushi fever – was the subject.

“We can skip this one,” said the instructor in Signe Skott Cooper’s class on communicable diseases. “You’ll never see it.”

Little did she know. The disease usually occurred halfway around the world, in Asia. Just a couple years later, Cooper, a Wisconsin farm girl, would be stationed in India as one of thousands of nurses who volunteered for the Army Nurse Corps.

“It was the patriotic thing to do,” Cooper recalled during a 2006 interview. “But I think all of us had a little bit of a sense of adventure.”

She led an adventurous life, embracing new challenges along the way. Cooper devoted more than 60 years to nursing education at UW–Madison and within the UW System. She died July 16, 2013, but her devotion to the school continued. Cooper pledged her own estate and that of her sister to the UW Foundation to support the construction of a new facility for the school. Signe Skott Cooper Hall opened in 2014, offering a state-of-the-art building for nursing students.

Cooper’s wartime service shaped the rest of her life, both personally and professionally.

“Nursing was never the same after World War II. We had carried a great deal of responsibility during the war, and we were not going back to being the physician’s handmaiden,” Cooper said in her memoir. “We had learned to be assertive and to demand recognition for our abilities and skills.”

She was the second of four children – three daughters and a son. In 1937, they moved to Wisconsin, eventually settling in Middleton. 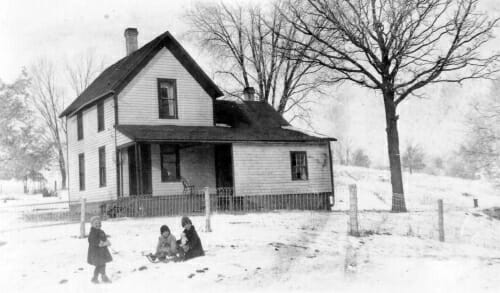 Signe with her sisters in front of the farmhouse. Courtesy of UW–Madison School of Nursing

Hans was a college-educated farmer, something rare at the time. In her memoir, Cooper writes of his strictness and high expectations. The children would try to impress him with a good report card. “Yes, but you don’t know the capital of Madagascar,” their father would say. “Antananarivo,” they’d report back. But he’d just ask more questions.

When Hans introduced his daughters, he’d say, a little too seriously, that they were supposed to have been boys. It hurt.

“Yet he encouraged us to become persons in our own right,” Cooper said. “In a sense, we were liberated before women’s lib was invented.”

“She was the first woman in the Buckhorn community to drive a car, mostly out of necessity because on the farm it helped to have someone who could run errands,” Cooper said.

Like most, the family struggled during the Great Depression. Her father fell ill with appendicitis. Back then, surgery was highly risky. Even getting a proper diagnosis was a challenge.

There was no such thing as health insurance. The surgeon wouldn’t operate until he was certain he’d be paid. Finally, her mother persuaded an uncle to provide a hog as payment. Precious time had been lost. Her father’s appendix had ruptured and peritonitis had set in. He eventually recovered, but the near-death experience left its mark.

“I have never forgotten the doctor who wouldn’t operate until he knew that he would be compensated,” Cooper said.

Cooper enrolled at UW–Madison, driving to class in her Ford Model A and parking all day in front of Lathrop Hall on University Avenue. Every Monday, she’d put $1 worth of gas in – enough to last all week.

“We took our studies seriously, but we also had some good times,” she said. “Midnight parties after studying late, making fudge in the dorm room kitchen, long walks to the end of Picnic Point, and sunbathing on the roof were welcome breaks. If we could scrape up 25 cents, we went to the movies.”

World War II changed everything. Nurses were in demand. Student nurses like Cooper saw staff nurses leave to serve. There were shortages of equipment. Many more nurses were needed, so much so that President Franklin D. Roosevelt proposed that nurses be drafted. A nurse draft bill passed in the House and came within one vote of passage in the Senate.

As soon as Cooper finished her nursing program in February 1943 and passed the State Board of Nursing exams, she volunteered for the Army Nurse Corps.

From Madison to India

There was little orientation and training for the nurses, she said. You went where you were told and helped the best you could.

From Virginia, she went to India. It was her first time on a plane – a C-47 with bucket seats. Her only trips in the past had been to the Iowa State Fair in Des Moines and to the 1933 Chicago World’s Fair.

She recalled stopping for fuel in Gander, Newfoundland, and having an early morning breakfast of fresh eggs – the last fresh eggs she would have for more than a year. Then it was on to the Azores, where she couldn’t leave the airport because of an epidemic of bubonic plague. 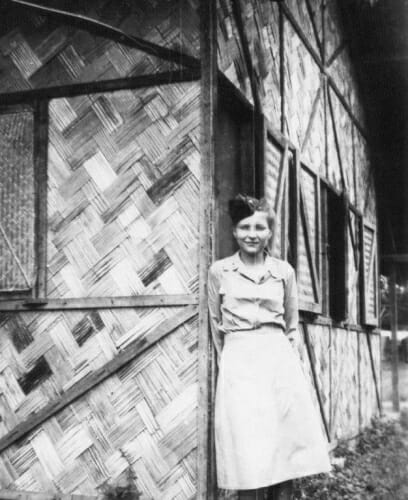 Signe Skott Cooper in front of her basha, the nurse’s living quarters at the military hospital in India. It had four rooms for eight nurses with a latrine a half block away. Courtesy of UW–Madison School of Nursing

Cooper served as a 1st lieutenant in military hospitals in Leo and Margherita, India.

Penicillin was just coming into use. Nurses were not allowed to mix the penicillin powder with the sterile distilled water (“as if we couldn’t read the directions!” Cooper said) – only doctors could. But that soon changed, Cooper says, “presumably because doctors did not want to get up at night to administer the penicillin at the required every-three-hour schedule.”

Death was all around. There was so much disease and so little the nurses could do about it. It was before Salk’s polio vaccine, before the widespread availability of antibiotics. Her unit averaged a death a day.

“I volunteered one night to take care of a patient with polio. And the next day the patient died. And I was devastated,” Cooper said. “I thought, oh, this is so awful. To go off to the war and die of polio, of all things.”

Some patients recovered and were sent back to their units. Others Cooper saw in the psychiatric unit.

“Never before had I worked so hard, or felt the work more satisfying. Yet, the work was also depressing.”

One patient was found hanging by a bathrobe belt in the latrine but was rescued in time to save his life. She treated a fellow nurse from a nearby hospital who fell ill. When this nurse was sent home, Cooper heard that she jumped overboard the ship.

“I don’t know if this was really true – I would like to believe it was not,” Cooper said.

Information was hard to come by and even harder to trust.

“We had so many false alarms that when they finally said the war is over, we didn’t believe it.”

In November 1945, she was discharged and sent to Fort Dix, New Jersey. Breakfast there was an event.

“I wish you could have seen what people were eating. Hot fudge sundaes. Malted milk. BLTs. All this stuff they hadn’t had.”

Cooper accepted a position at University of Wisconsin Hospital in 1946 as head nurse on the obstetrical unit. Transitioning back to civilian life wasn’t hard.

“Listen, I was so busy, I didn’t have time to think,” she said. “I was in a maternity ward, and this was the baby boom years.”

They once ran out of cribs and had to use a baby bathtub instead.

“Visitors would come to the nursery window, point to the baby and laugh, ‘There’s Baby Moses in the bathtub.’”

She finished her degree in 1948 while working full time, aided by the GI Bill, which paid for books and tuition.

What was hard was that no one wanted to talk about the war.

“The prevailing attitude seemed to be, ‘The war is over. Let’s forget about it and get on with our lives.’”

Treating patients had always been her passion so when she was asked to be an instructor at the nursing school, she was hesitant at first. But it was another challenge, another adventure. In 1951, Cooper was in New York when she found out she had been promoted to assistant professor. To celebrate, she splurged on a new Lord & Taylor suit for $100. When she got back home, she learned she had just blown her entire salary increase.

“But it was worth it, and I wore that suit until it was very frayed,” she said.

While teaching full-time, Cooper also pursued graduate education at Teachers College and later at the University of Minnesota, earning a master’s degree in education.

In 1955, she joined the faculty of the Extension Division (later known as UW-Extension) and held a joint appointment in the School of Nursing. For two years, she was the only nurse faculty member in extension.

Cooper was involved in a number of innovative programs over the next decade, including the development of extension courses in death and dying and the care of the elderly — areas that were not added to university nursing curricula until years later. In 1966, Cooper developed one of the first distance-delivered courses at Wisconsin, broadcasting lectures from Old Radio Hall on the Madison campus to more than 600 nurses at 24 “listening posts” across the state. The program was later expanded through the Educational Telephone Network to reach all 72 counties and 170 listening posts.

“We were on the cutting edge of changes in nursing and were able to explore many new approaches to helping nurses learn and improve their practice,” Cooper said.

After her retirement in 1983, Cooper developed a new field of expertise: nursing history. Over the next 15 years, she became the School of Nursing’s resident historian, documenting not only the school’s history but that of more than 100 nurses.

Cooper, along with thousands of other nurses, left their homes to serve. Her experience solidified her desire to care for the sick and to champion the value of nurses.

While we often think on Veterans Day of soldiers risking life and limb, thousands of women volunteered to take care of the sick and wounded – and to provide comfort to those they knew they couldn’t save.

“In spite of the mud and the monsoons, the malaria and the dysentery, and the monotonous food and limited recreation, morale was surprisingly high most of the time,” Cooper said.

There was a sense of camaraderie among the nurses, much as there is today.

“The nurses had a good support system. We helped each other through the rough times, encouraged each other, shared the good times, and provided solace in the tragic ones,” she said.

“I really would not want to live through it again but it was an experience that I am glad I had.”