An experienced administrator with a deep familiarity with campus and Wisconsin state government has assumed duties as interim chief of staff in the Chancellor’s Office. 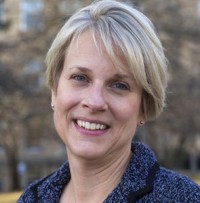 Noyes has held a series of key roles at UW–Madison, including most recently as vice provost for academic operations and the senior administrator responsible for campus COVID-19 response and operations.

Prior to serving in these roles, Noyes was chief of staff in the College of Letters & Science, associate director for programs and management at the Institute for Research on Poverty, and an IRP distinguished researcher — an affiliation she retains today.

Her background includes positions in several Wisconsin state agencies, including the Legislative Audit Bureau, the Department of Administration, and the Department of Workforce Development. Noyes was also a senior fellow with and Madison office director of the Hudson Institute’s Welfare Policy Center.

She holds a PhD in social welfare from UW–Madison’s Sandra Rosenbaum School of Social Work and a master of arts in public affairs from the University of Minnesota Humphrey School of Public Affairs. She completed her undergraduate studies at the University of Denver.

“Jennifer’s deep operational experience, connections throughout the university, and commitment to public service make her uniquely qualified to take on this role,” says Scholz.

Noyes succeeds Matt Mayrl, who has served as chief of staff for Chancellor Rebecca Blank since 2016 and is departing for a new role at American Family Insurance.

“Matt’s efforts have been central to many campus accomplishments,” Scholz adds. “We will miss not only his sharp strategic mind, but the skilled way he navigated difficult policy and operational challenges.”