NASA has been investigating features on the lunar landscape that may be “skylights,” or openings to larger caves below the moon’s surface. This graphic features a number of likely skylights from the Marius Hills region.

It’s widely believed that the moon features networks of caves created when violent lava flows tore under the surface from ancient volcanoes. Some craters may actually be “skylights” where cave ceilings have crumbled.

Since “lunar spelunking” expeditions aren’t coming soon, the challenge is how to confirm the existence and dimensions of these caves with current remote imaging. A unique imaging technology being developed at the Morgridge Institute for Research is providing NASA with an interesting and relatively inexpensive way to explore these out-of-sight features.

Andreas Velten, a Morgridge medical engineering affiliate and scientist with the University of Wisconsin–Madison Laboratory for Optical and Computational Instrumentation (LOCI), has developed a technology that fires and recaptures scattered laser light to literally “see around corners.” The system sends a pulse of laser light off of a wall or surface and into a nonvisible space. The scattering photons from the laser bounce off obstacles and make their way back to sensors in the camera. The dimensions of that unseen space are then recreated based on the time stamp of the photons that scatter back to the camera.

This technology is included in the NASA PERISCOPE project, which seeks to illuminate some of the more than 200 suspected lunar caves lurking under skylights. The ultimate goal is to include the technology on a satellite that orbits the moon at close range, directing laser pulses into suspected cave openings. The project is led by Jeff Nosanov, of Nosanov Consulting in Bethesda, Maryland.

“Geologists are interested because they would provide access to subsurface geology without actually having to dig, which would be very difficult,” Velten says. “There is potential for the discovery of water or other trapped volatiles under the surface.”

Even cooler are the implications for future manned missions to the moon. 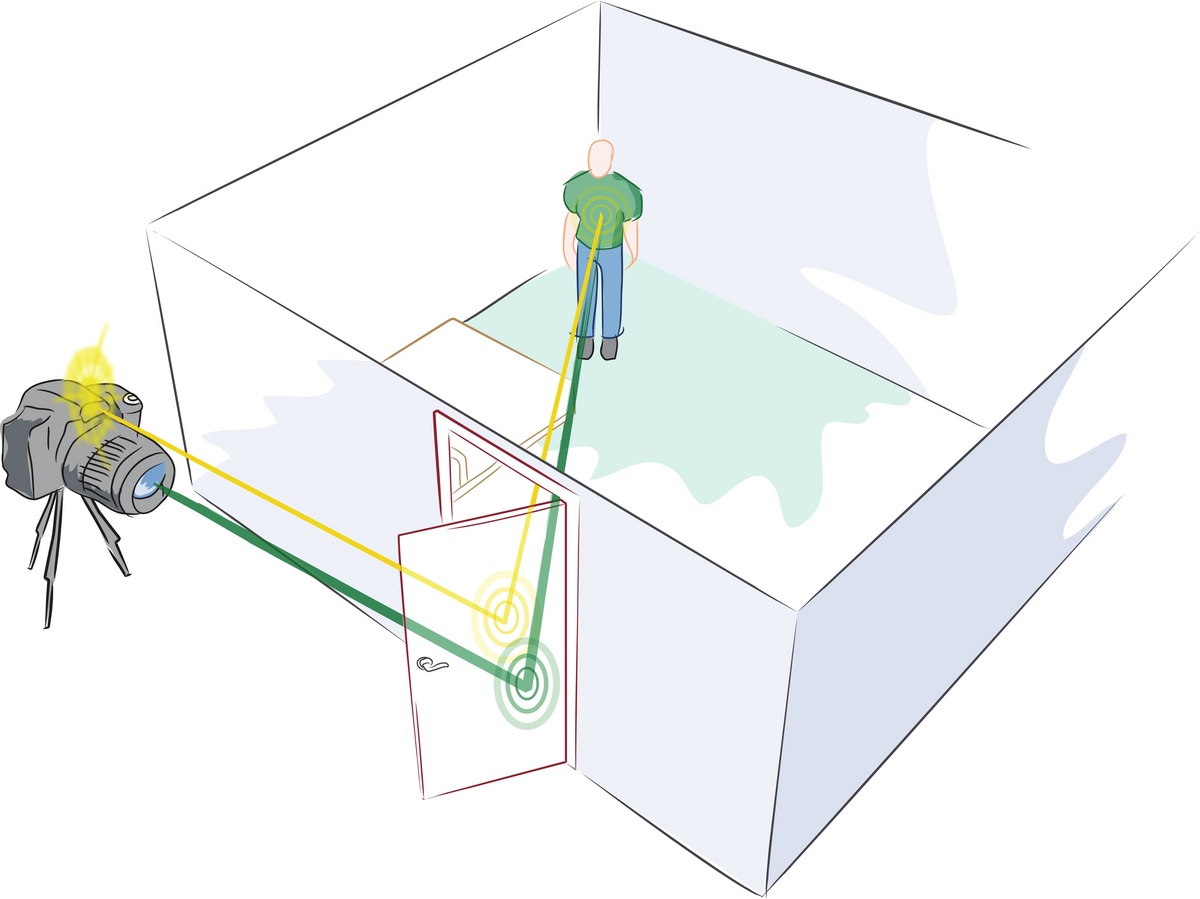 In this example, the imaging system being developed for NASA sends a pulse of laser light off of a surface and into a nonvisible space to “see around a corner.” With an ultra-fast flash and high-speed camera, the system can reconstruct images of objects the camera never looked at.

“What’s interesting for space travel is you can’t have people on the surface for long periods because of the temperature extremes, and because of radiation,” Velten says. “But in these caves, people could survive for a long time with consistent temperatures and no radiation. Some of these may actually be quite deep, under 50-60 meters of rock.”

Assisted by chemical engineering undergraduate Jessica Zeman, Velten completed a first phase using cave models this summer, and is beginning a second phase of field trials funded by a two-year, $500,000 NASA grant. Lava tubes created by volcanoes exist on Earth and are common in places like New Mexico and Hawaii. These tubes leave behind caves when the lava recedes, and they should provide Velten with geologic features comparable to the moon.

“These are likely much bigger than what we would encounter on Earth,” he says.

The most important first step is to identify caves that are open and have features most worthy of future exploration. The next step may be robotic exploration.

NASA has been interested in lunar subsurface exploration ever since the Lunar Reconnaissance Orbiter discovered cave skylights in 2009. The most important first step is to identify caves that are open and have features most worthy of future exploration. If Velten’s technology can identify those, the next step may be robotic exploration.

The NASA Jet Propulsion Laboratory in Pasadena, California is developing robotic rovers that could investigate such caves. The rovers have a number of arms with small, sharp hooks — like cockroach arms — that would allow them to grasp rock and climb into cave walls and ceilings.

“Even though geology tells us there should be caves at these sites, we don’t really know what’s down there,” Velten says. “We don’t want to spend hundreds of millions on a rover mission, only to find a hole in the ground with the cave blocked in.”

Velten’s imaging technology, also known as a “trillion-frame-per-second camera,” was first developed at the Massachusetts Institute of Technology (MIT). At Morgridge, Velten is developing new potential directions for scattered light imaging, including less invasive imaging of difficult to observe parts of the human body.

Learn more about the imaging technology in this video: