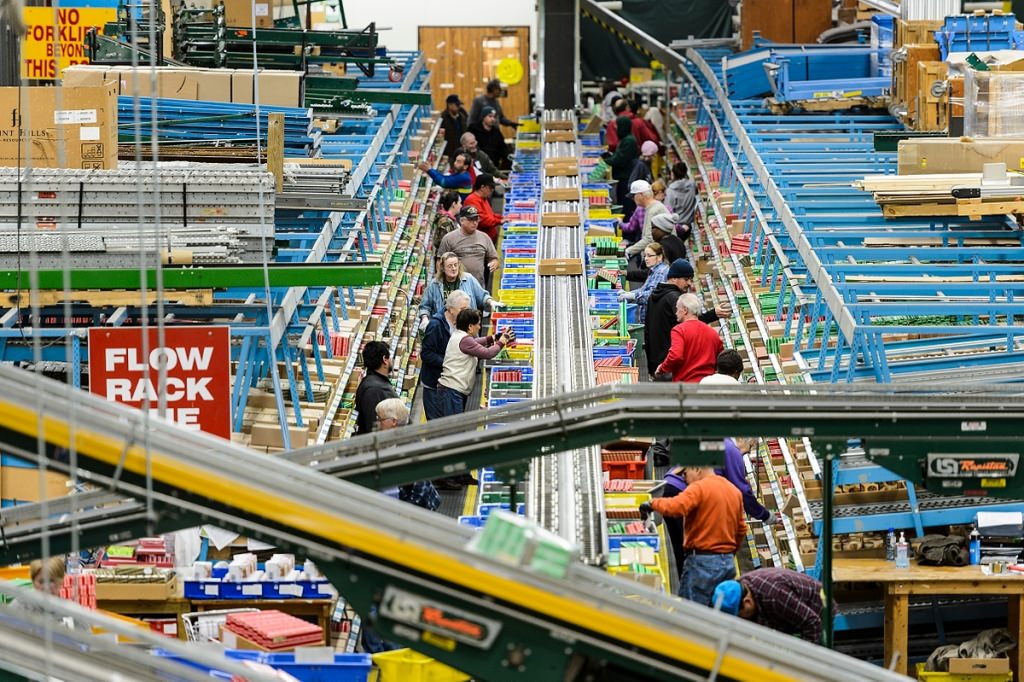 Staff sort and prepare merchandise moving along a series of warehouse conveyor belts at a food packaging and shipping facility at Colony Brands in Monroe, Wis. Colony Brands began as The Swiss Colony — a mail-order cheese business model launched in 1926 by Ray Kubly, Sr., who graduated that same year from the University of Wisconsin — and has evolved into a thriving billion-dollar-a-year, multi-catalog industry in Southwest Wisconsin. Photo: Jeff Miller

Gift packages of cheese and bakery goods are streaming down a sloping belt in early December, on one of the busiest days of the year at Colony Brands in Monroe, Wis.

At the foot of the belt, shrink-wrapped packages are shunted to an array of parallel conveyor belts that march them to a fleet of semi-trailers outside a vast building that handles distribution for one of the largest catalog operations in the United States.

Each of those parcels reflects what happens when a smart, disruptive idea meets a hard-working, far-sighted person with entrepreneurial drive.

Colony Brands is a company with strong roots in the University of Wisconsin–Madison. Its founder is a graduate, as are the present CEO and many current employees. Employees also participate in UW continuing education programs and give back through fundraising events and donations.

The story began slightly more than 90 years ago, when a business professor at the University of Wisconsin offered a tip to his student, Ray Kubly Sr. Although the prescient professor’s name has been lost to history, his question ran along these lines: “You come from Green County, with many excellent cheesemakers. Why don’t you sell bulk cheese by mail-order?” 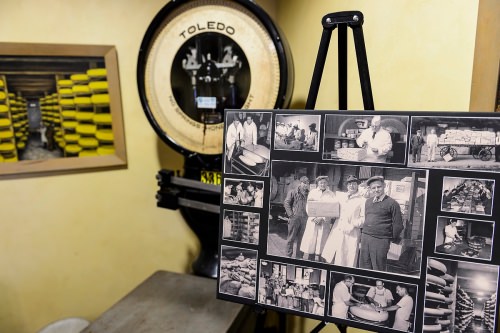 Pictured at center holding a parcel of cheese, company founder Ray Kubly Sr., is featured in a collage of historical company photos and artifacts on display at Colony Brands. Photo: Jeff Miller

It was apparently a good idea, and Kubly wrote up an advertising campaign for the class. In 1926, after earning a bachelor’s in sociology, Kubly put the plan in action, and sold 50 packages of cheese made in nearby factories that first year.

Originally, Kubly held a day job while selling cheese from the family basement. In 1954, he incorporated The Swiss Colony to enable growing sales of products from the many small cheesemakers in his backyard.

The name reflected the heavy Swiss heritage around New Glarus, and Kubly’s own background: His grandfather, Heinrich Kubli, was born in the canton of Glarus in 1835. After immigrating to the U.S., Heinrich settled in Green County.  His grandson, Ray, grew up on a farm east of Monroe.

Kubly was by all accounts energetic and determined. “The Swiss Colony,” a 2006 book by a retired employee, portrayed “an exceedingly thorough individual” who “could not let go of a question until he had an answer.” 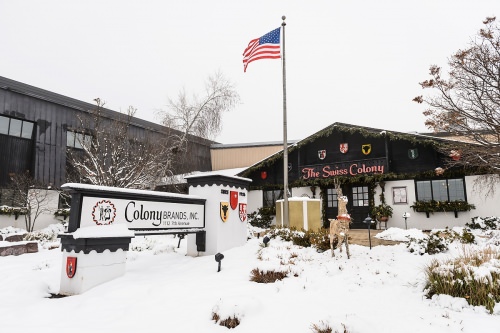 The headquarters for Colony Brands, Inc., is pictured in Monroe, Wis., during a snowy winter day. Photo: Jeff Miller

The company began diversifying beyond food around the early 1980s under the leadership of Ray’s son, Pat Kubly.  Pat saw opportunities for growth and challenged the company to innovate, with the goal of attracting new customers. In 2010, the firm that Kubly called The Swiss Colony spawned a parent organization called Colony Brands.

Colony has added catalogs to the original Swiss Colony catalog over the years as it branched out from Green County cheese to clothing, furnishings and housewares. As a “multi-channel marketer,” Colony has a growing reliance on Internet sales. Today, the company has 10 catalog and Internet brands.

Sales surpassed $1 billion in 2012, and the company has operations in Iowa, Illinois, Missouri and Shanghai, China. In total, Colony employs about 1,220 permanent full-time and almost 6,100 temporary seasonal employees. Of these, more than 850 full-time and 1,250 temporary employees work in Monroe, where Colony is the largest employer. 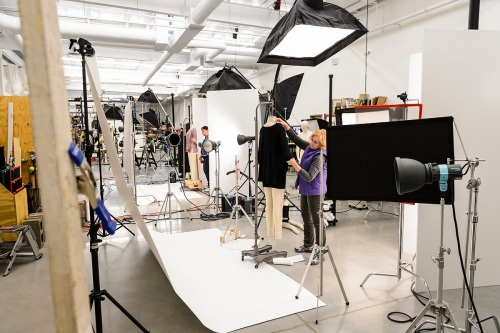 Staff photograph merchandise at an in-house photography studio at Colony Brands, for inclusion in one of the company’s catalogs. Photo: Jeff Miller

Even as Colony celebrates 90 years in business,
“‘Born in a classroom’ remains part of the company lore,” says CEO John Baumann, a 1982 UW–Madison journalism graduate. “We talk about the relationship with potential employees. We started by selling Wisconsin cheese, and we are deeply embedded in Wisconsin.”

Colony supports the communities where it operates with donations of time and money. In Monroe, beneficiaries include a broad range organizations related to theater, arts, education and sports.

For 63 years, Colony has organized “Badger Days” in Monroe to support Badger athletics. Founder Kubly had been captain of the UW cross country team, and later served on the athletics board. 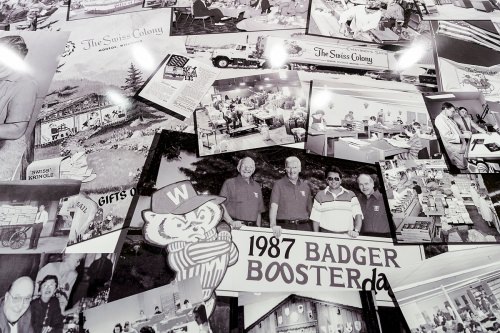 Pat Kubly, chairman of the board of Colony Brands and son of Ray Kubly, Sr., is pictured standing with his hand above the date 1987 in a collage of historical company photos on display at Colony Brands. Photo: Jeff Miller

“There are a number of UW–Madison grads here who bleed badger red,” says Baumann, a Monroe native, “so it’s a fun way to tie ourselves closer to the university, and raise money for a good cause.”

Currently, all donations and profits fund scholarships for UW–Madison athletes.

There are other connections.  Five Colony employees have graduated from the UW–Madison executive MBA program since 2007. The company has had a long involvement with the UW E-Business Consortium, says Colony e-commerce executive director Mark Douma.  “The UWEBC has done a fantastic job of enabling university-business collaboration. My digital team attends several functions per year … and we see broad participation from across our company as well, from supply chain, information technology and customer service.  Dr. Raj Veeramani has done a great job of building the UWEBC and I am proud to say Colony Brands has been an active part of this unique community.”

“I taught courses on E-business technology and strategy for 15 years at UW–Madison,” says Veeramani, a professor of engineering and business, and founding director of UWEBC. “It’s been a real win-win; students had the opportunity to work on real-world problems, and Colony has gotten the opportunity to work with multidisciplinary groups of very creative students who bring an outside perspective and new thinking.” 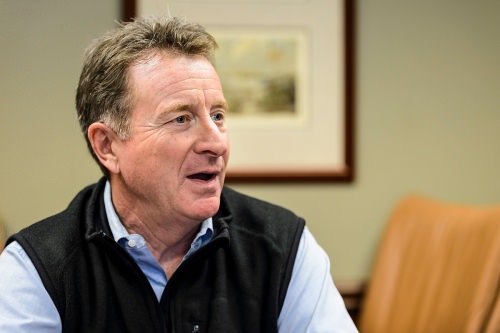 John Baumann, President and CEO of Colony Brands, Inc., talks with a reporter at his company’s headquarters in Monroe, Wis. Photo: Jeff Miller

Colony also participates in the Center for Professional & Executive Development at the Wisconsin School of Business on campus. “The topics, experienced instructors, interactive onsite sessions, and real-world approach are well matched to our development priorities and corporate culture,” says Ivy Kobbervig, Colony’s manager of organizational development.

It may be hard to remember now, but catalog sales were once a disruptive business model. Yet despite Colony’s strong track record, it’s no secret that catalogs and brick-and-mortar stores alike face intensified competition in the Internet age.

“We have great staying power, and have good formula for success,” says Baumann. “We are people driven, very data driven. We take a progressive but conservative approach; we don’t take wild gambles. We think the foundation is there to continue to do well, but let’s face it, we are entering a more competitive, fast-paced environment. We will be tested.”