For the first time, scientists will be able to test therapeutics for a group of rare neurodegenerative diseases that affect infants and young children thanks to a new research model created by scientists at the University of Wisconsin–Madison.

Hereditary spastic paraplegias (HSPs) are a group of neurodegenerative diseases caused by genetic mutations. They lead tens of thousands of children to develop increased muscle tone in their lower extremities, causing weakness in their legs and ultimately affecting their ability to crawl or walk.

“Kids as early as six months of age that have these mutations start to show signs of disease,” says Anjon Audhya, a professor in the Department of Biomolecular Chemistry at UW–Madison. “Between two and five years of age, these kids become wheelchair-bound, and they unfortunately will never be able to walk.” 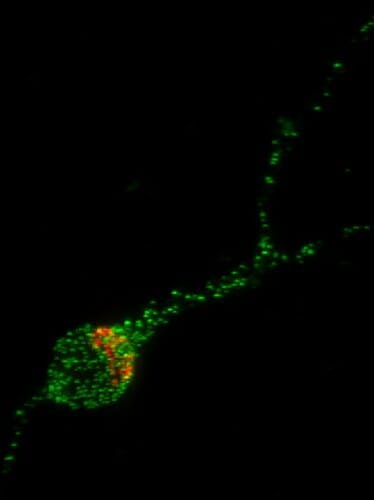 In this image of a human stem cell-derived neuron, the Trk-fused gene protein (TFG) is shown in green and the Golgi Apparatus, the organelle which helps package proteins for transport to the rest of the neuron, is shown in red. UW–Madison

Audhya explains that many scientists haven’t researched spastic paraplegias because there hasn’t been a good model to study the disease’s origins or test therapeutics. Previous mouse models haven’t worked because the neuronal pathways that carry movement-related information throughout the body appear to be too different from those in humans, and researchers have not yet pursued human clinical trials.

Audhya worked with an interdisciplinary team of UW–Madison researchers to study a specific mutation that causes HSP in young children. They then used what they learned to create a better model — in rats.

The mutation the researchers chose works on a protein called Trk-fused gene, or TFG. Healthy TFG proteins work inside nerve cells, or neurons, to carry other proteins from one part of the cell to another. A neuron’s job is to carry messages in the form of electrical signals between the brain and rest of the body.

The proteins that depend on TFG for their transport keep these neuronal pathways healthy, helping to manage which electric signals the brain sends to the body and which signals to inhibit. By balancing the right levels of stimulation, neurons can direct movements like contract the leg muscles involved in walking.

In young children with a mutation on their TFG gene, neuronal proteins don’t move through their nerve cells efficiently. Audhya says this may create an imbalance of electrical stimulation that allows an abundance of electrical signals to be sent to the lower extremities, resulting in elevated muscle tone. Over time, the excessive muscle tone leads to a loss of motor function. 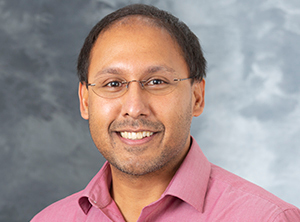 “You can imagine if you extend your leg really hard, and you put all your energy into flexing that muscle, it’s really hard to move it,” says Audhya, who is also the senior associate dean for basic research, biotechnology and graduate studies in the UW School of Medicine and Public Health.

Searching for a workable model, the researchers turned to rats to help these children. The team used CRISPR gene editing technology to create in rat embryos the mutations that lead to HSP. This allowed them to study how the disease progresses from early development and monitor the progression of symptoms after birth.

Not only are the rats’ neuronal pathways closer to humans’, but the researchers saw that symptoms developed similarly in rats to those seen in children with HSP. It also happened on a fast enough timescale that scientists should be able to easily test the viability of potential therapeutics.

“Exercise has been the only therapy that exists for these patients, and that’s really unsatisfactory,” Audhya says. “I think we’ve made a major leap forward in just having a model where you can test out different hypotheses. That’s big, from my perspective.”

The intricate details involved in biomolecular chemistry may seem mundane to some, but basic science like this fascinates Audhya. It wasn’t until he received a grant from the Spastic Paraplegia Foundation, which put him in contact with patients who have HSP, that he fully understood the potential impact his work could have.

“These are populations that are underserved. A pharma company is not likely to spend huge resources for an affected population that’s so small. Instead, they’re going to focus on diseases like Alzheimer’s and Parkinson’s,” he says. “So, I felt here’s a disease that is broadly overlooked, underinvested in, and here’s an area where we can make an impact.”

Audhya said he hopes this new model, which was published in the Proceedings of the National Academy of Sciences, will inspire more scientists to study HSPs to improve the understanding of the disease’s development and to eventually improve access to therapeutics that will help children living with it.