University of Wisconsin–Madison engineers have created a nanofiber material that outperforms its widely used counterparts — including steel plates and Kevlar fabric — in protecting against high-speed projectile impacts. 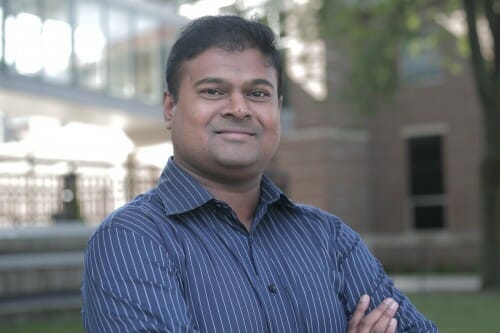 “Our nanofiber mats exhibit protective properties that far surpass other material systems at much lighter weight,” says Ramathasan Thevamaran, a UW–Madison assistant professor of engineering physics who led the research.

He and his collaborators detailed the advance in a paper published recently in the journal ACS Nano.

To create the material, Thevamaran and postdoctoral researcher Jizhe Cai mixed multi-walled carbon nanotubes — carbon cylinders just one atom thick in each layer — with Kevlar nanofibers. The resulting nanofiber mats are superior at dissipating energy from the impact of tiny projectiles moving faster than the speed of sound.

The advance lays the groundwork for carbon nanotube use in lightweight, high-performance armor materials, for example, in bulletproof vests to better protect the wearer or in shields around spacecraft to mitigate damage from flying high-speed microdebris.

“Nano-fibrous materials are very attractive for protective applications because nanoscale fibers have outstanding strength, toughness, and stiffness compared to macroscale fibers,” Thevamaran says. “Carbon nanotube mats have shown the best energy absorption so far, and we wanted to see if we could further improve their performance.”

“The hydrogen bond is a dynamic bond, which means it can continuously break and re-form again, allowing it to dissipate a high amount of energy through this dynamic process,” Thevamaran says. “In addition, hydrogen bonds provide more stiffness to that interaction, which strengthens and stiffens the nanofiber mat. When we modified the interfacial interactions in our mats by adding Kevlar nanofibers, we were able to achieve nearly 100% improvement in energy dissipation performance at certain supersonic impact velocities.”

Bring on the bullets. The researchers tested their new material using a laser-induced microprojectile impact testing system in Thevamaran’s lab. One of only a handful like it in the United States, the system uses lasers to shoot micro-bullets into the material samples.

“Our system is designed such that we can actually pick a single bullet under a microscope and shoot it against the target in a very controlled way, with a very controlled velocity that can be varied from 100 meters per second all the way to over 1 kilometer per second,” Thevamaran says. “This allowed us to conduct experiments at a time scale where we could observe the material’s response — as the hydrogen bond interactions happen.”

In addition to its impact resistance, another advantage of the new nanofiber material is that, like Kevlar, it is stable at both very high and very low temperatures, making it useful for applications in a wide range of extreme environments.

The researchers are patenting their innovation through the Wisconsin Alumni Research Foundation.

Claire Griesbach, a doctoral student in Engineering Physics, is a co-author of the study.

This research was supported by funding from the U.S. Army Research Office and the UW–Madison Office of the Vice Chancellor for Research and Graduate Education.