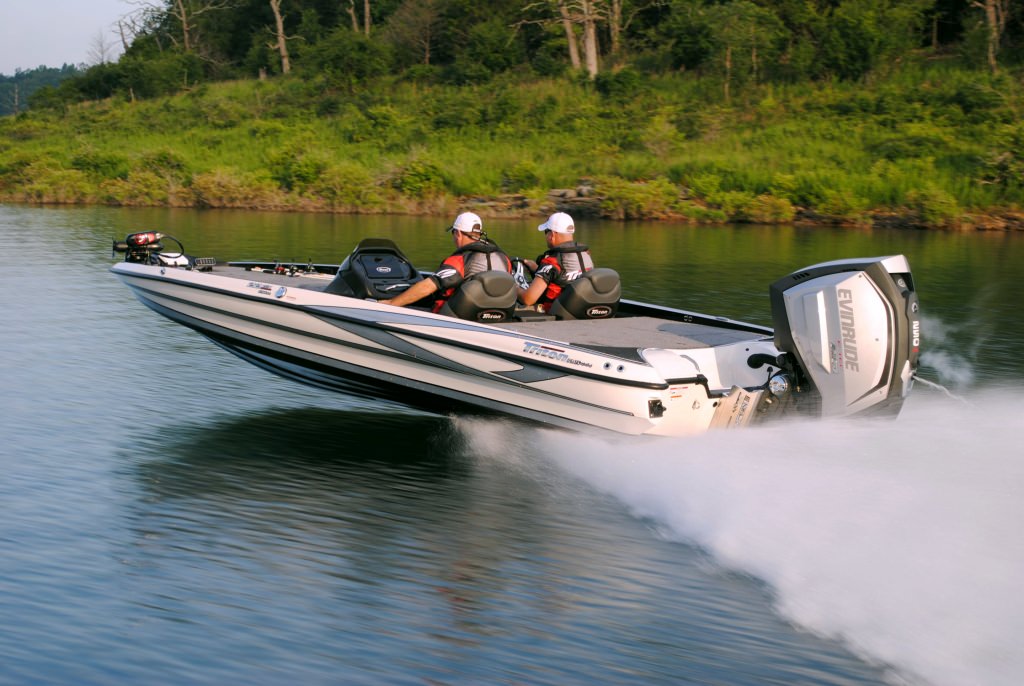 Evinrude’s 250 horsepower E-TEC G2 (shown powering a bass boat) was designed with help from engine modeling software developed at the University of Wisconsin–Madison College of Engineering. Photo courtesy of BRP/Evinrude

To understand what happens inside the cylinder of an outboard motor running at 5500 rpm, BRP/Evinrude got some help from an unlikely source: software code originally written to understand the motion of air after an atomic bomb explosion.

The physics of fluid flow are applicable in both cases, says Rolf Reitz, a professor emeritus of mechanical engineering at the University of Wisconsin–Madison. In the 1970s, in response to the OPEC oil crisis, Reitz helped repurpose code written by the weapons group at Los Alamos National Laboratory for the auto industry.

The result became the basis for a package called KIVA that predicts and explains the highly complex events inside an engine’s cylinder, allowing designers to reach the “sweet spot” of high power, good fuel economy and low emissions.

The cylinder is a complex place, says Paul Westhoff, a mechanical engineer at BRP/Evinrude in Sturtevant, Wisconsin. Westhoff led the computational fluid dynamic modeling during the “blank sheet of paper” design for the combustion cylinders in Evinrude’s E-TEC G2 engines, introduced in 2014.

“Everything is moving fast in a very interactive system,” he says.

“Using computer modeling, we can do hundreds of runs and explore potentially high-benefit, high-risk paths. If we had to prototype them, we would run out of money.”

To take just a few critical variables, designers must balance the location, size and shape of the intake and exhaust ports; the shape of the piston and cylinder head; and the timing and direction of the fuel spray and the spark that ignites the explosion.

These factors combined affect how air enters the cylinder and mixes with the fuel spray, and how the burned gas exhausts after the explosion. Reaching one goal can compromise another, Westhoff explains. “You want to mix fuel and air throughout the cylinder, but don’t want fuel going out the exhaust port.”

Evinrude’s new engines, which range from 200 to 300 horsepower, are two-stroke, direct-injected engines, and represent the industry’s best combination of power, economy and low emissions, Westhoff says.

Air motion and fuel spray inside the cylinder of a fuel-injected two-cycle outboard engine is represented in the KIVA engine simulation software. The air loops around the cylinder (white arrows) and fuel is sprayed in at the top. As the piston approaches the top, the air-fuel mix is ignited, pushing the piston down to finish the cycle. Courtesy of Paul Westhoff, BRP/Evinrude

Because the theoretical mix of designs is essentially uncountable, the traditional method of engine design — reliant as it is on metal prototypes — is expensive, and every modification costs more money. Yet until recently, engine designers had few alternatives.

So when BRP/Evinrude, a venerable Wisconsin manufacturer with 700 employees that is now a division of BRP Inc., embarked on a total redesign of its flagship high-power outboards, it took an entirely different approach: designing in silico.

The process relied on KIVA, open-source software that has been under steady development at the UW–Madison Engine Research Center. 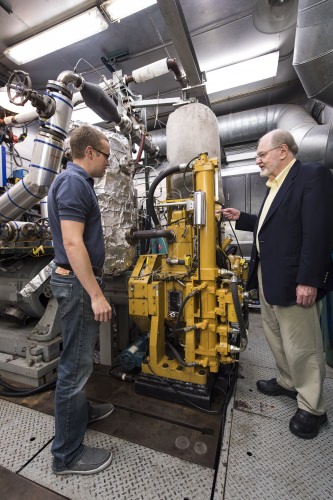 Reitz began working on software to describe furiously moving fluids for his Ph.D. work at Princeton University in the late 1970s. “The Department of Energy wanted to take the governing equations from Los Alamos research — the physics should be the same — and apply them to engines, and they were very successful,” Reitz says.

Eventually, the software principles and expertise developed at UW–Madison spread through the auto industry, and KIVA and related software from private companies has been put to work by Ford, Cummins, Caterpillar and many other big engine makers, Reitz says.

In his long career exploring the complex events inside engines, Reitz has also used KIVA to develop gasoline-diesel hybrid engines that offer some of the highest efficiency in the world.

Westhoff says Evinrude’s “blank sheet of paper” design process began where all the action starts: inside the cylinder. “We modeled fluid flow through the cylinder — the induction of air from the crankcase through the intake port into the cylinder, which displaces the residual exhaust from the previous cycle. It’s important to maximize the amount of trapped oxygen, because the more oxygen in the cylinder, the more power.”

The E-TEC G2 engines are Evinrude’s second generation two-cycles using fuel injection, but the first to be designed in silico. “Previous generations of direct injection engines were primarily adaptations of the fuel system from an existing carbureted engine,” Westhoff says. “With direct injection, you have the ability to manage the fuel flow that you don’t have with a carburetor. This is new technology.”

Do-overs are almost free with computer design, he adds. “Using computer modeling, we can do hundreds of runs and explore potentially high-benefit, high-risk paths. If we had to prototype them, we would run out of money.”

But that’s only true if the model is “smart enough” to emulate the real world of air, fuel and moving metal. And here, Reitz says, KIVA has benefited from the hallway full of test engines at the Engine Research Center that are used to confirm and improve the fluid-dynamics software.

The KIVA software doesn’t only evaluate designs; it also explains why they behave as they do, Westhoff adds. “An engine can be a black box, but this helps us understand the physics. If you look at the three-dimensional modeling results, they can make you think differently, and that leads to other ideas. The result is not your grandpa’s two-stroke.”