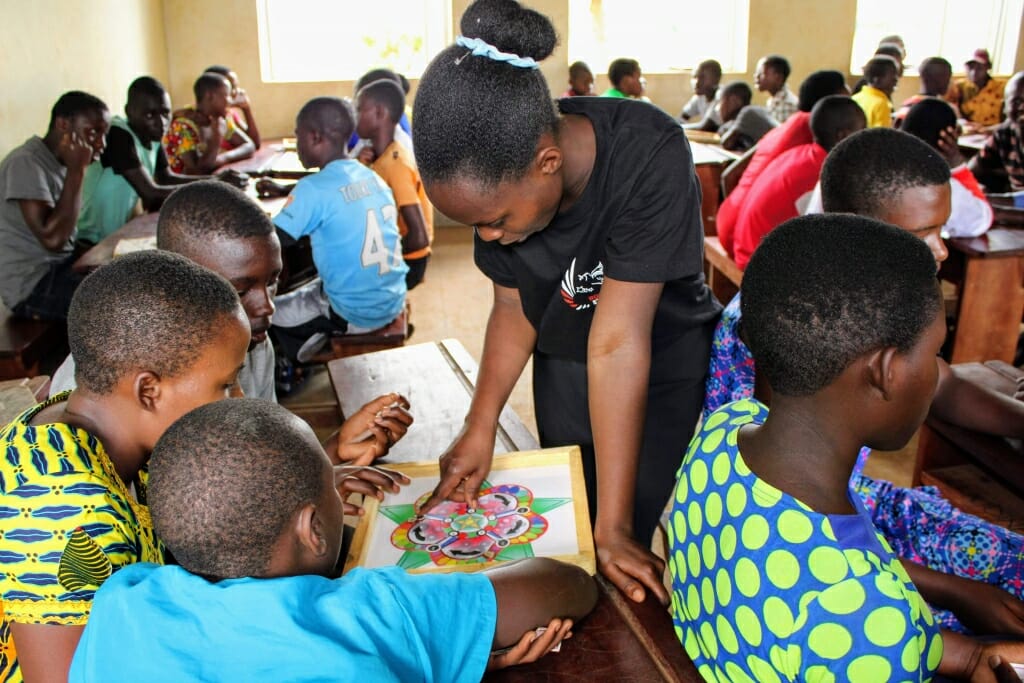 Once a refugee himself, University of Wisconsin–Madison senior Joel Baraka has long dreamed of helping children in refugee camps get ahead in life. Now, he’s invented a board game for students across sub-Saharan Africa that turns learning into fun.

Baraka and his civil and environmental engineering classmate Anson Liow created a board game called 5 STA-Z for children in refugee camps. The game incorporates core curriculum subjects taught in Uganda — math, science, social studies and English — and breaks them down into easy-to-understand parts.

“It’s collaborative and competitive, and something we want to be fun and engaging,” Baraka says. “At some point during the game, children have to challenge each other for some questions, but there are also points where they can ask for help.”

Baraka was born in Congo, but his family fled to Uganda’s Kyangwali Refugee Settlement to escape civil war in his home country. He grew up in the camp, where he completed his primary education before attending high school at the African Leadership Academy in South Africa. At ALA, Baraka explored the possibilities of attending school in the United States, and came to UW–Madison through the King-Morgridge Scholars program. 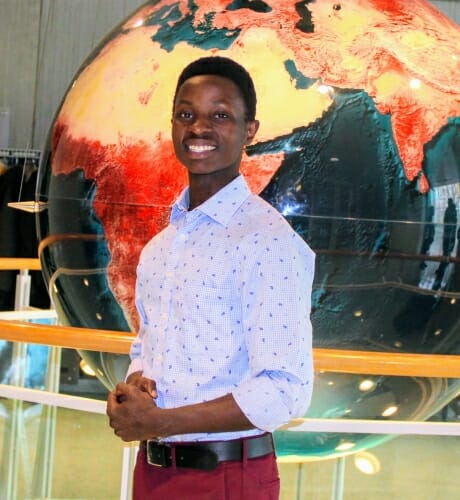 Joel Baraka grew up in a refugee camp in Uganda. Later, on a return visit to his former elementary school, he had the idea to create an educational game.

He knows firsthand how challenging learning can be for children in refugee camps.

“In a refugee camp, there aren’t many resources that children can use,” Baraka says. “They rely on teachers as the main form of learning. Classes can have up to 200 children, and that can be very frustrating for students and teachers.”

During his entrepreneurship class at ALA, Baraka and his peers were tasked with looking back into their communities and identifying challenges they would want to solve. Given his passion for education, Baraka wanted to work on school-related challenges in his village. As a high school student with an interest in civil engineering, he initially considered trying to raise funds for a library as a way of supporting the children there and giving them opportunities for a brighter future. He says the idea was perhaps a bit too big for him at the time. However, that idea, along with advice from his teachers, put his mind on the right track for when another opportunity arose.

While in high school in South Africa, Baraka occasionally returned to Uganda to see family. While there, his elementary school teachers would ask him to visit their classes and talk to their students. Baraka noticed that kids in the back would often lose focus and play among themselves. This, tied to his firsthand experience of attending school in the same environment, sparked an idea.

“Even during breaks when they were not having class, I could see them inventing simple games and just playing,” he says. “So, I had the thought: What if school was more of a place where children are not expected to come and sit in class and just watch the teacher teach? What if there was a game where you could teach math? You’d have the child in the front and the child in the back engaged at the same time.”

From that moment, Baraka knew he wanted to create an educational game. The prototype has changed over time, but he remained convinced that students who were having fun would be more engaged in their lessons. The 5 STA-Z game gathers the children into clusters of five, making learning more engaging and groups easy for teachers to manage. 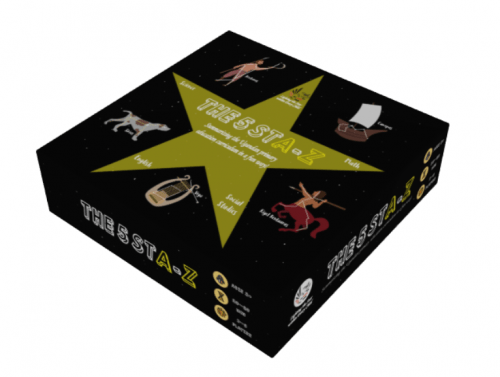 “When you look at the name, it’s five stars,” Baraka says, “but it’s spelled with ‘A-Z’ because I wanted to create a game that covered the full curriculum of Uganda.”

“My hope is that when children use this game, they will become stars as they’re playing,” he says. “As they are playing the game, they are learning and becoming its stars as they master the content. When you look at the name, it’s five stars, but it’s spelled with ‘A-Z’ because I wanted to create a game that covered the full curriculum of Uganda.”

In 2018, Baraka met Liow while the two lived in the same university housing at UW–Madison. They became fast friends and found connections in their backgrounds — Liow had volunteered as a teacher for refugee kids in Malaysia. Liow got involved, initially, by helping create the packaging for the game.

“For me, being involved with this startup is about making an impact, and there’s so much we can do outside of our regular responsibilities as students,” Liow says. “Joel showed me how much of an impact a simple idea and hard work can make. For me, that’s been the inspiration for getting involved with this, and I’m super excited that we’ve been successful at engaging students not just in Uganda, but an audience all over the world that’s supporting our project.”

For Baraka, two big lessons from UW–Madison have helped with the idea. The first is the Wisconsin Idea — that what’s happening in his classrooms should benefit people off-campus —and sharing the knowledge he’s gained at the university to help and inspire others. The second, he says, is finding the tenacity to tackle challenges head-on, thanks to the College of Engineering’s rigorous curriculum. 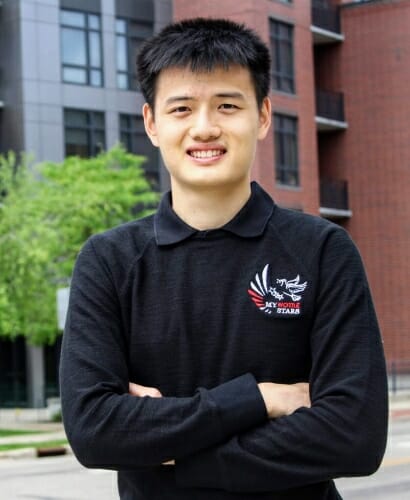 “For me, being involved with this startup is about making an impact, and there’s so much we can do outside of our regular responsibilities as students,” Anson Liow says.

“And that’s what life is all about: taking on challenges and solving problems,” he says. “That’s engineering, too. You can’t just learn it by just reading books. You learn it by doing hard challenges in your classes, by working with other students on hard projects. When you come to things like social entrepreneurship and ideas like the 5 STA-Z, you find a strong correlation.”

Liow says other skills he and Baraka have learned as engineering students carry over directly to the game, too.

“There’s so much day-to-day problem-solving that we have to go through in the College of Engineering that really encourages creativity and improves our collaborative skills,” Liow says. “All of that has really helped mold me into a well-rounded individual. When it comes to things like the 5 STA-Z, even though it’s about education and not so much engineering, those soft skills we’ve learned have definitely helped a lot.”

To date, the two and a few other colleagues involved in the idea have raised more than $11,000 on GoFundMe for their startup, My HOME Stars, and produced 200 game sets of 5 STA-Z to support two primary schools in the Kyangwali Refugee Settlement. They’re working with a Ugandan producer to manufacture the game in the country and are hoping to produce at least 300 more sets.