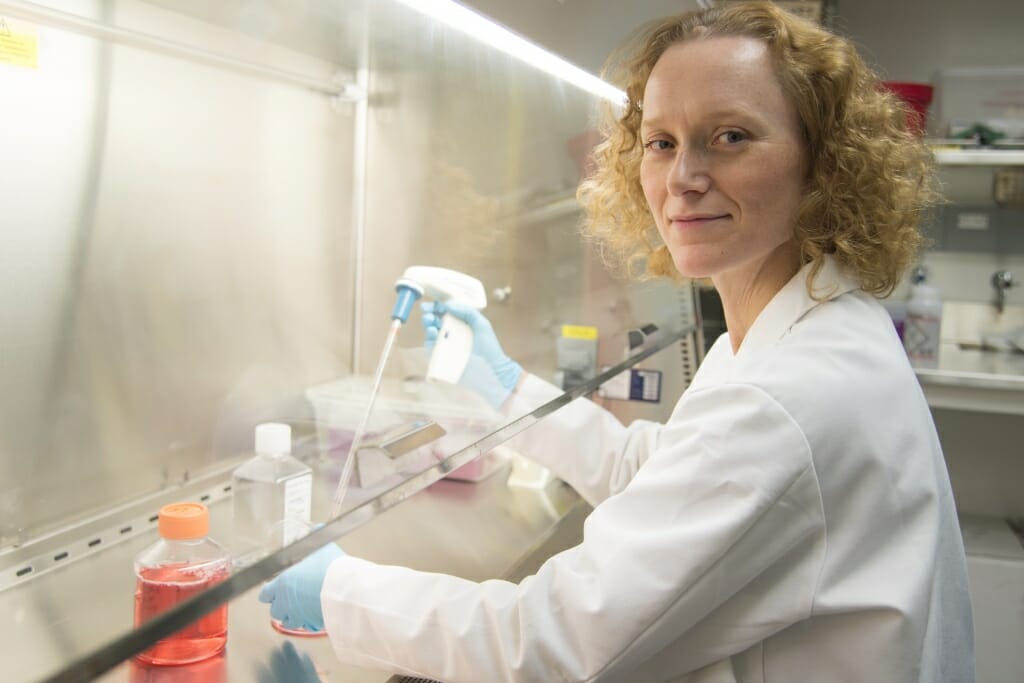 Heidi Dvinge in her lab in the Department of Biomolecular Chemistry. Robin Davies

Hometown: I’m originally from Århus, the second-largest city in Denmark. Although I often say I’m from the capitol Copenhagen (I studied there), since people have usually heard of that.

Educational/professional background: My background is in biochemical engineering, from the Technical University of Denmark. The system is a bit different back home, so I did what’s called a candidate degree, which corresponds roughly to a bachelor plus 2-year masters. After that I moved to England for a job, and ended up doing my Ph.D. there, at the University of Cambridge, followed by a postdoc at the Fred Hutchinson Cancer Research Center in Seattle.

How did you get into your field of research? Actually a bit by coincidence. When I first started university, I thought I was going to be a molecular biologist, and stand all day at the bench wearing my white lab coat. However, since my degree was in engineering, it was mandatory that we attend a range of math, statistics, and programming classes. I realized – much to my surprise – that I actually really enjoyed those. To explore that in greater depth, I subsequently ended up pursuing a Ph.D. in computational biology. However, much as I preferred analyzing the data over painstakingly creating it, I found it very limiting that I always had to rely on collaborators or public repositories for data. For my postdoc I therefore merged my previous experiences, doing a combination of wet- and dry-lab research.

What attracted you to UW–Madison? I was very impressed both by the quality of the research itself, as well as the overall research environment. Madison is an internationally recognized hub within RNA research (RNA is the molecule that transfers the information contained within our DNA out into the cell where it’s translated into proteins, which are the main functional components of our cells). At the same time, the research is very open and collaborative, rather than competitive. Everyone within the department as well as across campus are trying to help each other out.

What was your first visit to campus like? Cold! There’s just no way around it. My first visit was in December, right after a big snowfall, and I was sightseeing around campus at -10F. The very warm welcome I received from everyone more than made up for the outside temperature though.

Favorite place on campus? Like many other people, I enjoy the path along Lake Mendota, between Picnic Point and Memorial Union. However, at the risk of sounding super geeky, my favorite place so far is my own lab.

What are you most enjoying so far about working here? Setting up my lab has been a lot more fun that I thought it would be! I was dreading all the paperwork, and having to buy every little bit of plastic ware, equipment, and reagents before being able to do any experiments at all. However, starting entirely from scratch, recruiting graduate students, and beginning new experimental directions has been a very exciting experience. Well, except for the paperwork…

Do you feel your work relates in any way to the Wisconsin Idea? If so, please describe how. My research is basically about how human cells works, and especially what the difference is between normal and abnormal cell growth. This is what happens when healthy cells become cancerous, and they start rapidly dividing or change their basic characteristics, such as cell shape, cell-to-cell connections, or response to external stimuli. Most – if not all – of us probably know someone who has been diagnosed with cancer at some stage, and figuring out the cellular mechanisms that drive cancer cells is something that is of relevance to everyone.

What’s something interesting about your area of expertise you can share that will make us sound smarter at parties? Hmmmm, good question. I’m much better at sounding geeky at parties. Well, the human genome has just over 20,000 genes, which is actually less than many other species, such as plants. However, because the genes can be ‘read’ differently by the cells, they can be translated into more than ten times as many different proteins.