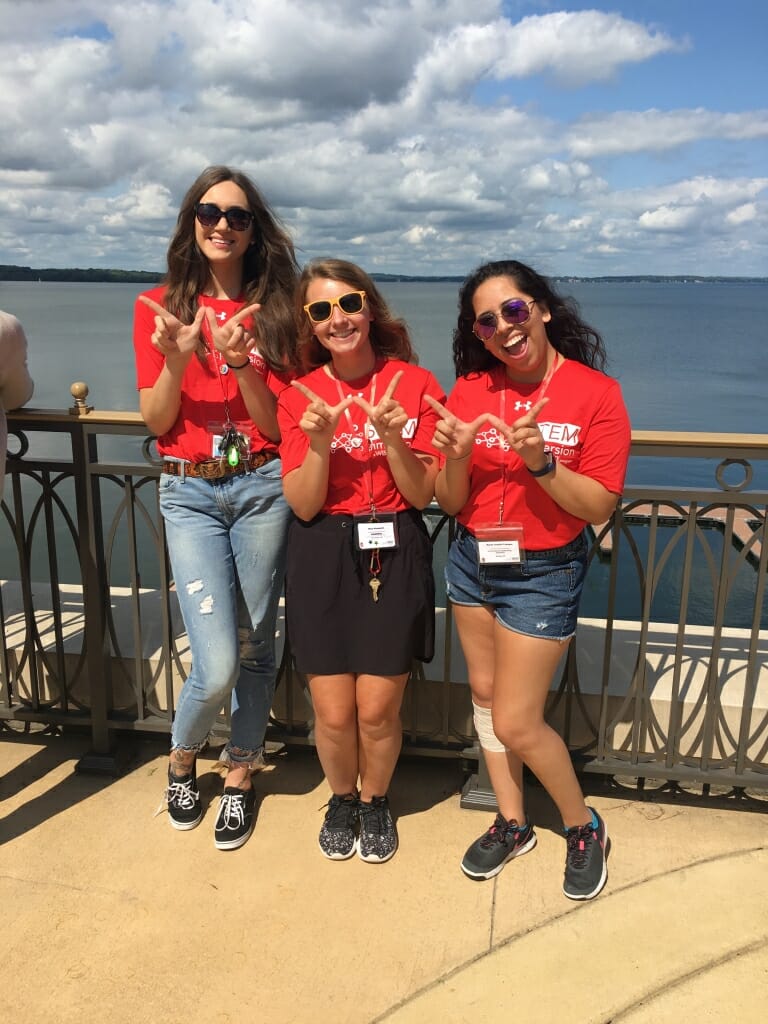 Maria Venegas (right) and Mina Stumpfoll (middle) met at a STEM event and soon bonded over both being transfer students.

For transfer students, the first months on a new campus can be like freshman year all over again.

Maria Venegas, a junior transfer from UW-Parkside, feared she would feel isolated as a transfer student and woman of color on a large, predominantly white university. Being new and different “clashed head to head,” Venegas said.

“I did end up feeling that resonance of isolation for quite a bit, especially as a transfer student,” Venegas said. “As a freshman, everyone else is just as lost as you, so people are more willing to make friends and be accepting of others. But as a junior, people have already settled who their friends are and they all went through progressions together.”

At STEM Immersion, a multi-day program that helps integrate new students into the STEM community, Venegas met four other transfer students who were struggling with the same things she was. The group decided to check out the Transfer Engagement Center together.

The TEC is the Transfer Transition Program’s brand-new space for transfer students and students of all backgrounds to study, access resources, get advising, and build community. Operating out of 110 Middleton S. Building, a tight-knit team of students and staff work to make the transfer transition as smooth as possible.

Venegas quickly formed friendships with a group of transfer students that were similar to her classes at Parkside – small but diverse, with every person from a different background.

“There is no such thing as a ‘typical’ transfer student on this campus, or really on any campus,” Knuth said. “Transfer students bring an abundance of wealth with them to campus, including diverse thought, experiences, and cultures.” 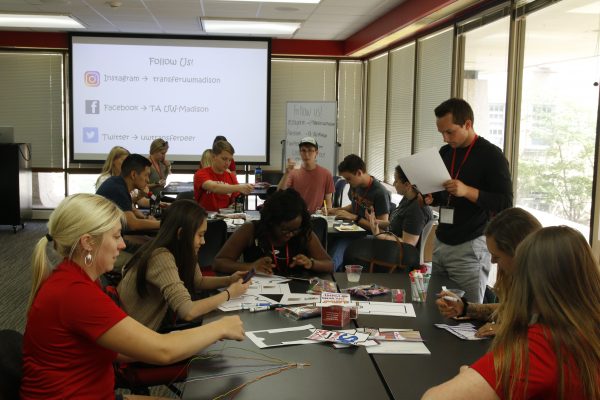 Students work on projects at the brand-new Transfer Engagement Center.

Mina Stumpfoll was one of the four transfer students Venegas met at STEM Immersion. Having just arrived on campus from Northern Michigan University, Stumpfoll worried she wouldn’t make friends, wouldn’t know what was going on on campus or what resources were available, or end up lost on the nearly 1,000 acre campus.

After Stumpfoll and Venegas had finished studying one night, Stumpfoll realized she didn’t know how to navigate the bus routes to find her way home and began to worry.

Venegas sprang into action to help her new friend.

“I knew her for like .5 seconds,” Stumpfoll said, laughing. “And so we just jumped on the bus, and she’s like, ‘Yeah, just sit down, pull the cord, and get off.’ I was like, ‘Oh yeah, we’re going to be best friends.’”

“I had only been here for four days, and I was so scared, too, the first time,” Venegas said. “But I was like, ‘I’ve been here four days, I can do it … I have to do it to help my friend even though I just met her.’”

Their first bond was formed, like many friends, while lost in a new place, together.

Stomfoll instantly found the TEC to be relaxing and welcoming. She felt relief to have a place that can answer the specific questions and struggles experienced by transfer students.

Now, having been at UW for several months, Stumpfoll has settled in a bit and found a few favorite spots on campus. Before the cold drove the Botanical Garden’s koi fish indoors, she would stop there between classes and relax, absorbing the beauty of the plants and the fish.

“I didn’t have anything like that at my other school,” Stumpfoll said. “There’s just so much to explore. It’s exciting.”

Venegas said the TEC has eased her transition from a school whose biggest class held 35 students to a school whose smallest classes hold nearly that same number. The center has connected her with a lot of valuable resources beyond friends, including mental health and academic resources.

The social aspect is still difficult, though. As a woman of color and a transfer student – two separate identities on campus – she said it can be difficult to fit in.

Her advice to new transfer students who feel the same way is don’t be afraid to reach out for help.

“There will be someone who also had that struggle, especially since there are so many people here,” Venegas said. “At least one person knows what you’re going through, and they’d be willing to help or at least point you to someone who can help.”

October 15 – 19 is National Transfer Student Week. Nationally, 38 percent of undergraduate students transfer, so if you aren’t a transfer student yourself,  you likely know someone who is. Help spread love and awareness of transfer students by attending Transfer Transition Program events or spreading some much needed kindness in the world. Click this link to learn more about this week’s many fun events and #TransferActsofKindess opportunities.