Nanomaterial bests all others in blocking speeding projectiles

University of Wisconsin–Madison engineers have fabricated a rubbery nanomaterial that outperforms all other materials, including steel and Kevlar, in protecting against high-speed projectile impacts.

The research provides insights for using nanostructured polymers to develop lightweight, high-performance armor. In the future, these new types of armor could potentially be used as a shield on military vehicles to provide enhanced protection from bullets, as well as on spacecraft to mitigate impacts from meteorite debris. 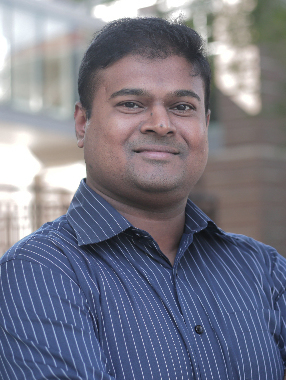 Ramathasan Thevamaran, a professor of engineering physics at UW–Madison, and postdoctoral research associate Jizhe Cai made ultrathin films only 75 nanometers thick out of a relatively common polymer with a nearly impenetrable name — semicrystalline poly(vinylidene fluoride-co-trifluoroethylene) — and demonstrated that the material was superior at dissipating energy from microprojectile impacts over a wide range of velocities.

They detailed their research in a paper published in the journal Nano Letters.

Materials can exhibit different properties at the nanoscale than at larger sizes. This allows researchers to potentially improve specific properties of a material by working with it at extremely small sizes.

“When we shrunk the polymer down to this nanometer length scale, we found that its internal microstructure completely changed in an unexpected fashion compared to its larger scale,” Thevamaran says. “Surprisingly, the energy-absorbing mechanisms in the material became very prominent, and we found that this particular polymer was performing significantly better than any other material—both large materials and previously reported nanomaterials—at absorbing energy from the projectiles.” 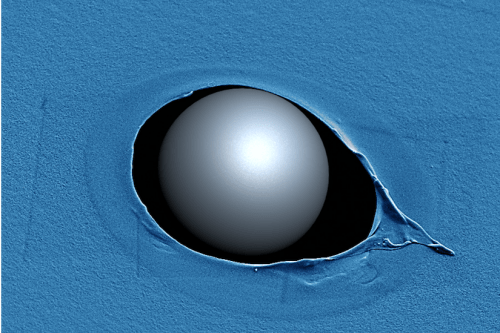 A post-impact scanning electron microscope image of a sample that was penetrated by a supersonic micro-projectile. Image courtesy of Ramathasan Thevamaran

To test their ultrathin polymer films, the researchers used a unique experimental technique called micro-ballistic impact testing. They launched projectile particles of about 10 microns (roughly one-tenth the width of a human hair) in size at the polymer film at velocities ranging from 300 feet per second to 3,500 feet per second — several times the speed of a bullet.

Cai and Thevamaran used an ultrafast imaging system to capture images of the projectiles as they penetrated the polymer film, and then they calculated the penetration energy — the amount of kinetic energy from the projectile that was absorbed by the material, per kilogram of the material.

“We normalized the penetration energy values, which allows us to make comparisons between the performance of these polymer films and different material systems,” Thevamaran says.

In addition, Cai and Thevamaran used scanning electron microscopy techniques to study how the material deformed during and after impact. They observed that the impacts caused extensive stretching and deformation in the material, similar to how a piece of rubber can stretch and snap back into shape.

“The key reason this material is performing better across the broad spectrum of velocity is because of its elastic nature in room temperature,” Thevamaran says. “The organization of the material’s internal structure enables ample stretching and deformation mechanisms, which enhance its ability to dissipate energy.”

Maybe not so much for people, though: Thevamaran says the rubbery nature of this material would make it challenging to use for applications like bulletproof vests, because impacts from bullets would protrude into the material and potentially cause blunt trauma injuries to the wearer.

Instead, Thevamaran says this material could be suitable for developing so-called “ambient armor,” where the armor shields the target, but isn’t applied directly to it.

“For example, with ambient armor positioned a short distance from a spacecraft, meteorite debris would first have to penetrate through several layers of this armor, which would dissipate almost all the energy before the projectile strikes the spacecraft, greatly minimizing any damage,” he says.

Thevamaran says the next steps in this research include further scaling up the material and the projectile sizes.

“We want to test a multi-layered system to make sure the novel properties we discovered in micro-ballistics can still be exploited for performance at a larger scale,” he says.

This work was supported by the UW–Madison Office of the Vice Chancellor for Research and Graduate Education with funding from the Wisconsin Alumni Research Foundation.