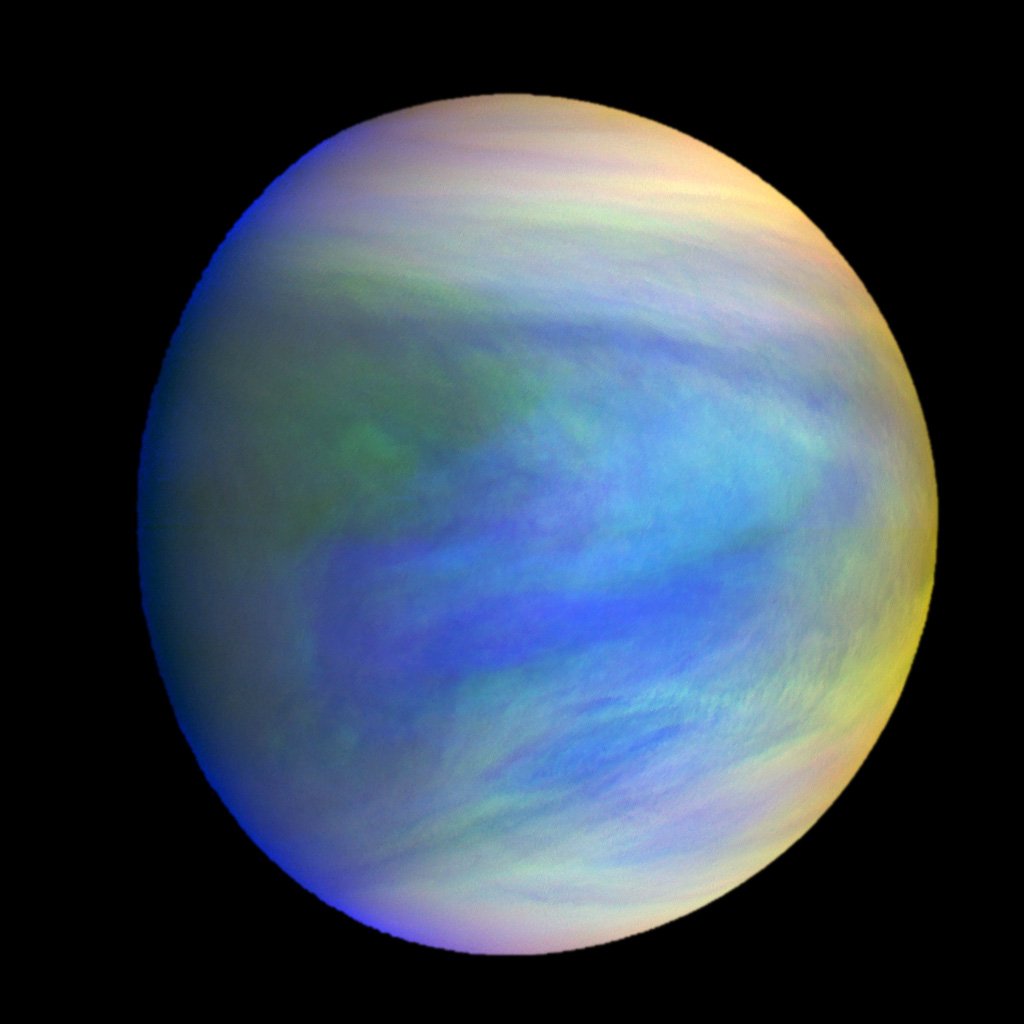 A composite image of the planet Venus as seen by the Japanese probe Akatsuki. Image from the Akatsuki Orbiter, built by Institute of Space and Astronautical Science/Japan Aerospace Exploration Agency

As planets in our solar system go, Venus is one for the textbooks.

Although about the same size as Earth, Venus is a terrestrial planet with a similar composition to our planet, and has about the same proximity to the sun. But the parallels pretty much end there. Venus is much hotter – in the neighborhood of 860 degrees Fahrenheit (460 degrees Celsius) at the surface – due to a runaway greenhouse effect caused by a thick, carbon dioxide rich atmosphere and a blanket of clouds composed mostly of droplets of sulfuric acid. The planet rotates in the opposite direction of Earth (the sun rises in the west), and its surface has never been seen by the human eye as it is completely obscured by its banks of opaque, highly reflective clouds.

But like Earth, the Venusian weather is driven by solar radiation and is deeply influenced by changes in the reflective properties or albedo of the clouds that envelop the planet. And now a better picture of that weather and how it is influenced by changes in the reflectivity of the clouds has emerged, thanks to an international team of researchers using a suite of satellites to assess in ultraviolet light the long-term variations in Venus’ albedo. The new study is published today (August 26, 2019) in the Astronomical Journal. 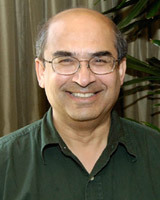 “The difference between Earth and Venus is that on Earth most of the energy from the sun is absorbed at ground level while on Venus most of the heat is deposited in the clouds,” explains Sanjay Limaye, a University of Wisconsin–Madison planetary scientist and a co-author of the new study.

What is curious about Venus’ clouds – other than that they are unlike anything on Earth – is that in those clouds are mysterious dark patches, dubbed “unknown absorbers” by scientists as the tiny particles that make up the patches soak up most of the ultraviolet and some of the visible light from the sun and thus affect the planet’s albedo and energy budget.

The patches were first observed by ground-based telescopes more than a century ago. They ebb and flow over time, changing their distributions and contrasts.

“The particles that make up the dark splotches, have been suggested to be ferric chloride, allotropes of sulfur, disulfur dioxide and so on, but none of these, so far, are able to satisfactorily explain their formation and absorption properties,” explains Yeon Joo Lee, the senior author of the new report.

On the other hand, Limaye notes observations that the particles are about the same size and have the same light-absorbing properties as microorganisms found in Earth’s atmosphere, and scientists, beginning with the noted biophysicist Harold Morowitz and astronomer Carl Sagan, have long speculated about the possibility that the shadowy patches in the clouds of Venus are, in fact, microscopic life.

Whatever their composition, Venus’ “unknown absorbers,” according to the new measurements of the planet’s albedo, a feat led by Lee of the Technical University of Berlin, are having an effect on the planet’s weather. Lee and her colleagues, including Limaye, studied changes in Venus’ albedo using more than a decade of ultraviolet observations of the planet from instruments aboard the planetary probes Venus Express, Akatsuki and Messenger as well as the Hubble Space Telescope.

Between 2006 and 2017, Venus’ albedo, the measure of ultraviolet light reflected back to space, halved before beginning to rebound. Those changes to the planet’s albedo sparked big variations in the amount of solar energy absorbed by the clouds and, consequently, the circulation of Venus’ atmosphere. In particular, the albedo changes help explain variations in the vigorous activity of the planet’s upper atmosphere, which exhibits what scientists call “super-rotation,” a phenomenon driven by winds exceeding 200 miles per hour.

Takeshi Horinouchi of Japan’s Hokkaido University, also a co-author of the new Astronomical Journal report and an expert on Venusian weather, says the new results of the changes in the planet’s albedo provide a link between solar heating and the powerful gusts that underpin the dynamics of the planet’s upper atmosphere.

“What really struck me about this paper is that it shows that Venus’ climate has decadal-long climate variations, just like the Earth,” says Venus expert Mark Bullock of the Southwest Research Institute and who was not involved in the new study. “Even more amazing, the strength of the climate oscillation on Venus is much greater than Earth’s long-term variations.”

“That is a striking result,” Limaye adds. “It suggests that something is changing. We can see the change in brightness. If the albedo is changing, something is driving those changes. The question is, what is the cause?”

The ebb and flow of the mysterious dark splotches at the tops of Venus’ clouds, the “unknown absorbers,” are near the top of the list of suspects and could, in fact, be playing a major role in those changes, say Lee and Limaye. Haze above the clouds and composed of smaller particles, they add, can make Venus appear even brighter.

Weather and climate, be it on Earth or on Venus, are driven by solar radiation, including the ultraviolet radiation that we can’t see. And clouds and their changing ability to reflect light have a huge influence.

The new study helps flesh out the dynamics of Venus’ albedo and the potential effects of the enigmatic dark splotches that wander the tops of the planet’s cloud banks, if not their composition. But the results are only likely to pique the interests of the scientists who study the planet and its weather, which may impart new lessons about Earth and its climate and weather.