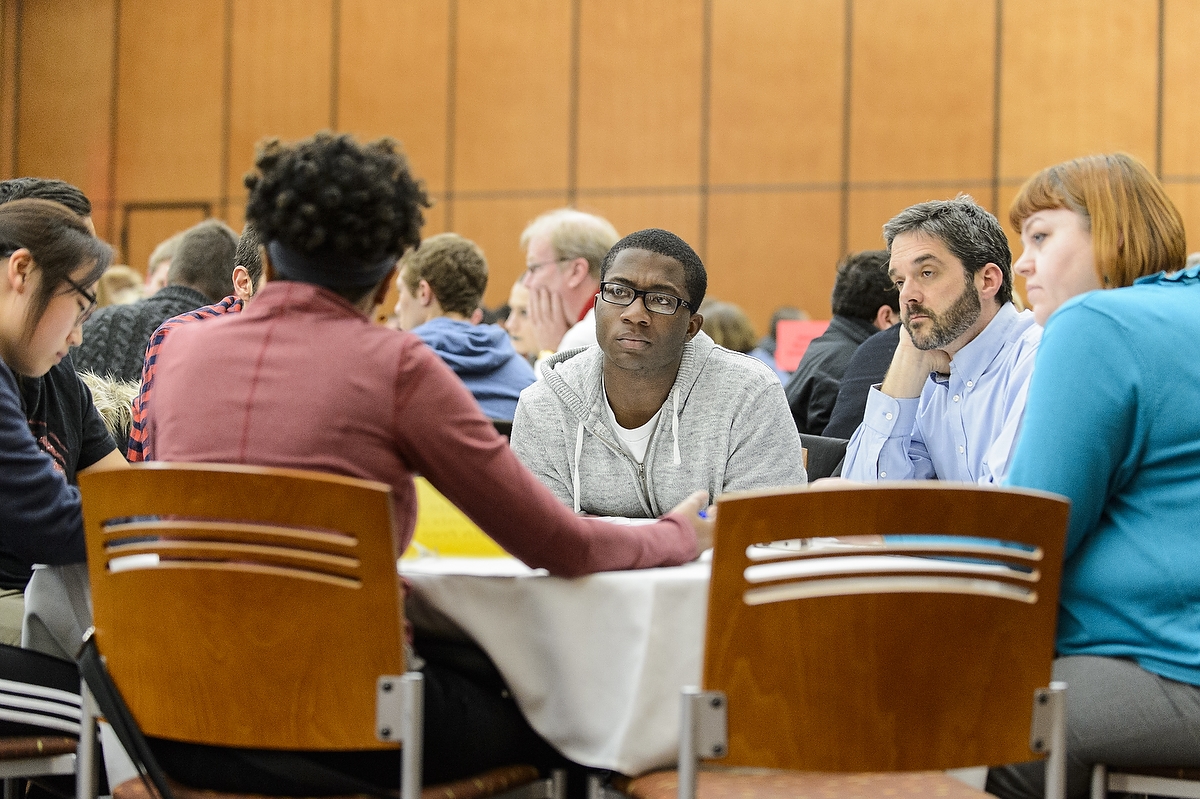 Diversity is a top institutional priority for the University of Wisconsin–Madison for many reasons: giving the university a competitive advantage to attract the best faculty and students, providing a richer education, developing students’ ability to work with a wide variety of people.

And most obviously – “It’s the right thing to do,” said Chancellor Rebecca Blank.

On Wednesday, more than 400 people took part in a discussion on how to bring that priority from ideal to reality.

“Moving Forward: Conversations on Racial and Ethnic Diversity” offered discussions and updates on campus progress and issues since the first Conversation on Diversity and Inclusion, held last year in the wake of protests across the country. Wednesday’s event followed a “Coffee and Conversation” last week, hosted by administrators, as well as a town hall addressing anti-Semitism on Tuesday.

“Sometimes the most simple adjustments we can make involve face to face contact,” said Patrick Sims, vice provost and chief diversity officer. “It’s saying hello to someone as you walk past them in a hallway. Acknowledging that someone may be in a place of hurt and the degree to which you can offer your shoulder as a firm support to lean on in a time of need. It’s those subtle ways that we relate to others as human beings.”

Sims offered updates on diversity efforts, including the campus Diversity Framework. Last spring, the Framework identified 18 initiatives to be addressed in the coming years, targeting two initiatives a year over the next nine years.

This year, the university will conduct its first-ever campus-wide climate survey on diversity, examining the experience of students, faculty and staff in all roles and all parts of campus. In addition, the Diversity Inventory Project intends to provide data about diversity efforts on campus.

Chancellor Blank pointed to several improvements over the past decade, including an increase in the percentage of students of color (from 10 to 15 percent) and faculty of color (from 15 to nearly 20 percent).

She also acknowledged some of the challenges that UW–Madison faces.

“The budget problems that have hit all public universities in the past decade mean that we can’t just say, ‘Well, we’ll spend more money on this,’” she said. “I also think that there’s an opportunity in not just being able to say, ‘Well, we’ll buy our way out of this problem,’ because many of the issues that you’ll be discussing today are about campus culture and climate. Spending money may not be the most effective way to address them.”

For nearly an hour, participants engaged in facilitated table discussions on five core topics selected by a campus-wide Facebook poll:

“We’re hoping that this isn’t seen as a one-off conversation but more so the next in a series of conversations,” said Argyle Wade, associate dean of students and one of the organizers of the event. “We can’t completely address these issues in one two-hour setting. But we hope that each time they’re discussed we’re moving them forward.“

In the Q&A session following the table discussions, student Mariam Coker came back to that statistic.

“There’s a huge gap between the acceptance rate and the enrollment rate,” said Coker, a sophomore from the Washington D.C. area who chairs the Equity & Inclusion committee for the Associated Students of Madison. “The issue isn’t getting more students of color to stay here; the new issue is to get more student of color to be here.”

Other Q&A topics included creating expectations of engaging in difficult conversations as a matter of course, finding ways to support students who must choose between work and school, and engaging faculty in discussions about free speech that respect the exchange of innovative ideas while ensuring the safety of their students.

“I taught for 20 years at three different universities, and I can’t recall a single conversation about free speech,” said Chancellor Blank. “Now, in the last 10 years, I’ve had lots and lots of conversations.”

Sophomore Ricardo de la Cruz II was happy to connect with others who, like, himself, weren’t part of organized groups discussing these issues.

“Since I’ve been to events like this before, the takeaway is always seeing that there are people who care, that people will support the idea of having this dialogue,” he said. “That, in itself, is an inspiration to get out and hear people.”

Over and over, speakers exhorted participants to take the mantle on their own shoulders, taking responsibility for their own role in this process.

“The people who need to be here are not here, so bring these discussions to them,” said Coker. “I cannot say this enough: carry these conversations with you.”