With an estimated 97 percent of adolescents playing video games in their free time, there is growing potential to design games as tools for attention-building instead of attention-busting.

A research team at the Center for Healthy Minds at the University of Wisconsin–Madison and the University of California, Irvine, designed a video game to improve mindfulness in middle schoolers and found that when young people played the game, they showed changes in areas of their brains that underlie attention. 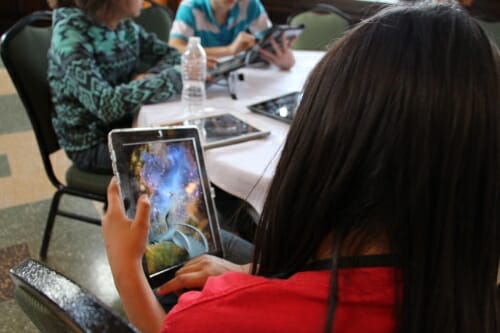 A research team designed a video game to improve mindfulness in middle schoolers. Adolescents who played the game showed changes in areas of their brains that underlie attention and performed better on attention-oriented tasks. Photo: Marianne Spoon / Center for Healthy Minds

“Most educational video games are focused on presenting declarative information: various facts about a particular subject, like biology or chemistry,” says Elena Patsenko, a research scientist at the Center for Healthy Minds and lead author on the recently published paper. “Our aim is different. We want to actually change the cognitive or emotional processes — how people think or process information they’re trying to learn.”

The game, called “Tenacity,” was designed for middle schoolers and requires players to count their breaths by tapping a touch screen to advance. It leads players through relaxing landscapes such as ancient Greek ruins and outer space.

Players tap once per breath while counting breaths for the first four breaths and then tap twice every fifth breath. Players earn more points and advance in the game by counting sequences of five breaths accurately.

This trains mindfulness, which is a state of awareness of the present moment, by encouraging players to focus on their breaths.

In the study, 95 middle school-aged youth were randomly assigned to one of two groups, either the Tenacity gameplay group or a control group that played the game “Fruit Ninja,” another attention-demanding game that does not teach breath counting or aspects of mindfulness. Kids in each group were instructed to play their assigned game for 30 minutes per day for two weeks while researchers conducted brain scans with participants before and after the two-week period.

Researchers found that adolescents in the Tenacity group had changes in the connectivity between their left dorsolateral prefrontal cortex and the left inferior parietal cortex in the brain, which are two areas critical for attention. 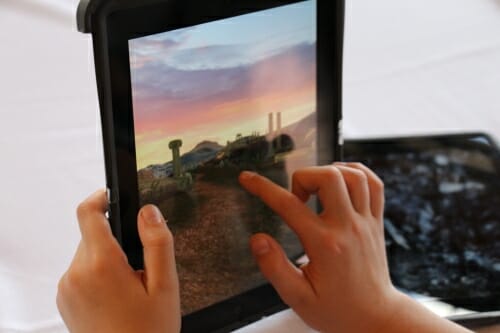 These changes in the brain were associated with improvements on an attention task in the lab and were found only in the group playing Tenacity. Kids who played Fruit Ninja showed none of these changes.

“Training attention has been criticized in the scientific community because we often use a particular task to train attention and see improvement in that task alone, which doesn’t translate into other tasks or day-to-day activities,” says Patsenko. “Here, we trained young people with Tenacity (a breath-counting game) and tested them with another unrelated attention task in the lab. We found that brain changes following two weeks of gameplay were associated with improvement in the performance on that unrelated attentional task.”

The public is increasingly interested in meditation and mindfulness training. There are several smart phone apps on the market that are predominantly geared toward adult populations, including programs developed by the Center for Healthy Minds. However, video games can be a tool to engage younger people in mindfulness training.

“Video games may be a powerful medium for training attention and other positive qualities in teenagers, and even small amounts of practice induce neuroplastic changes.”

The capacity to voluntarily control attention and minimize distraction has been linked to people’s emotional health and is foundational to learning.

“This study illustrates that changes in objective measures of brain function and behavior are achievable with relatively short amounts of practice on a novel video game,” says Richard Davidson, co-author on the paper and the William James and Vilas Professor of Psychology and Psychiatry. “Video games may be a powerful medium for training attention and other positive qualities in teenagers, and even small amounts of practice induce neuroplastic changes.”

The project reflects a larger trend toward developing games for the greater good, says Constance Steinkuehler, a professor of informatics at UCI, who led creation of the game while at UW–Madison.

“Games for impact have entered the mainstream, affecting both consumers and the industry,” she says. “Good designs and solid research move not only players but also future designers as well. This work lays a great foundation for wellness interventions for kids.”

The game, originally developed for research, is not supported for public use at this time.

This research was funded by a grant from the Bill & Melinda Gates Foundation.