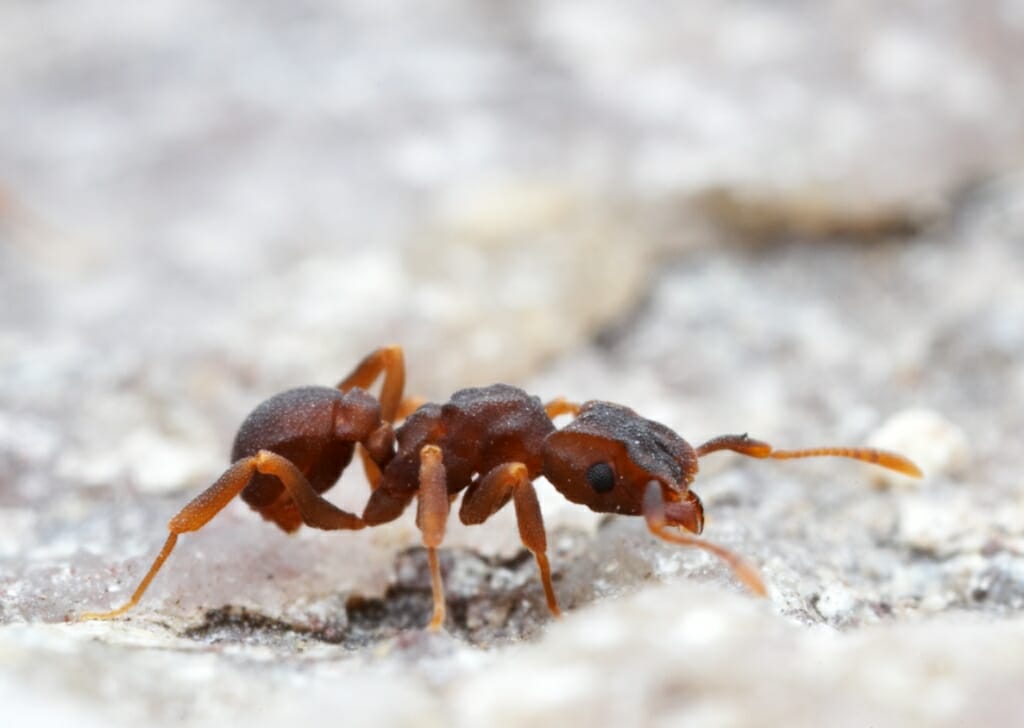 A Cyphomyrmex ant. These fungus-growing ants harbored a microbe that made the newly discovered antibiotic cyphomycin. Photo by Alex Wild

Medicine was transformed in the 20th century by the discovery and development of antibiotics, the vast majority of which came from one source: soil bacteria.

But we seem to have tapped out that supply. Resistance by disease-causing pathogens to existing antibiotics is increasing, endangering millions of lives and costing billions of dollars. New surveys of soil bacteria tend to turn up old chemicals. And few pharmaceutical companies are developing new antibiotic drugs.

But the same class of bacteria that gave us many of our antibiotics, known as Streptomyces, makes a home not just in the soil but all over, including on insects. Cameron Currie, a University of Wisconsin–Madison professor of bacteriology, has shown that some of these insect-associated microbes provide their hosts with protection against infections, suggesting that insects and their microbiomes may be a rich new source of antibiotics for use in human medicine. 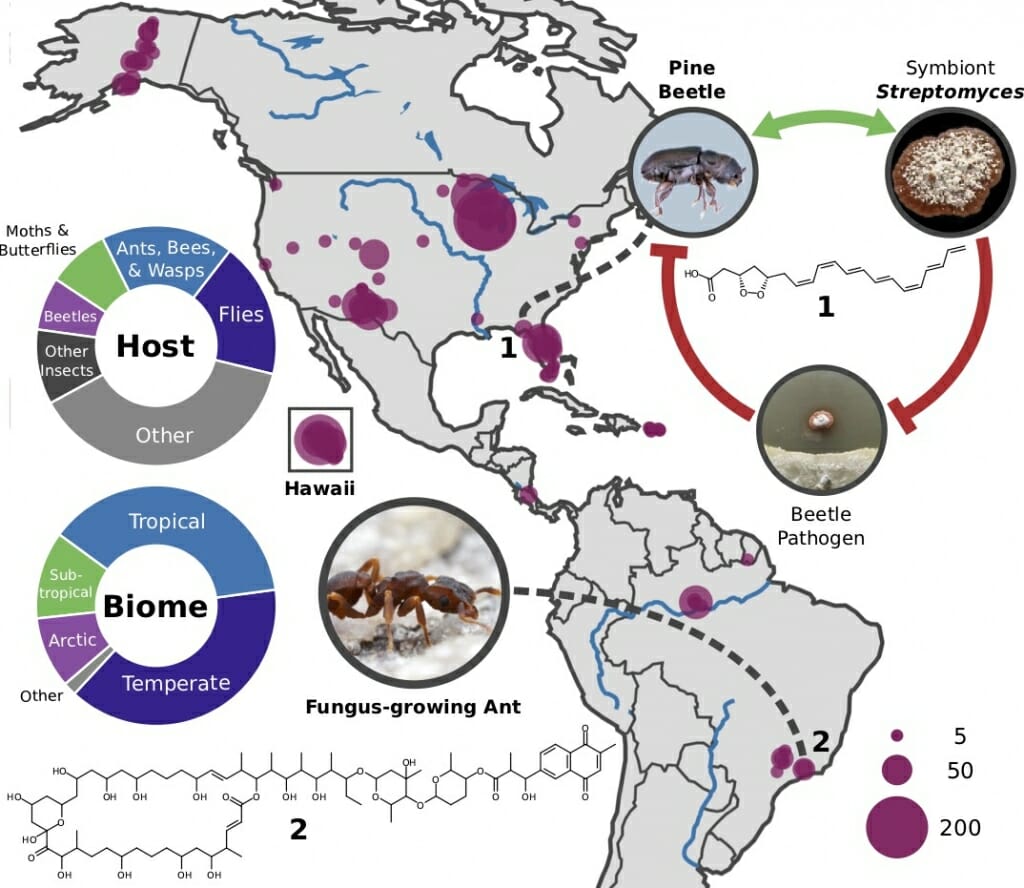 Researchers collected more than 2500 insects of all kinds from diverse habitats across North and South America to prospect for microbes that might produce novel antibiotics. Cameron Currie and Marc Chevrette

So with a team of collaborators, Currie set out to test that idea, thousands of times over. In an exhaustive search of microbes from more than 1,400 insects collected from diverse environments across North and South America, Currie’s team found that insect-borne microbes often outperformed soil bacteria in stopping some of the most common and dangerous antibiotic-resistant pathogens.

In their work, the scientists discovered a new antibiotic from a Brazilian fungus-farming ant, naming it cyphomycin. Cyphomycin was effective in lab tests against fungi resistant to most other antibiotics and combatted fungal infections without causing toxic side effects in a mouse model. The researchers have submitted a patent based on cyphomycin because of its effectiveness in these early tests, setting up the team to begin to do  the significant additional work required before cyphomycin could be developed into a new drug used in the clinic.

The study is the largest and most thorough to assess insect-associated microbes for antibiotic activity to date. 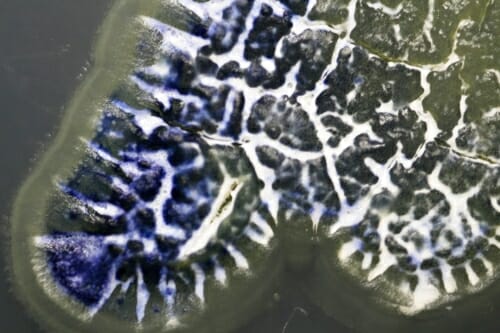 The Streptomyces bacteria that produced the new antibiotic cyphomycin shows off a purple hue. Photo by Caitlin Carlson

The work was published Jan. 31 in the journal Nature Communications. The study was led by Currie lab graduate student Marc Chevrette with collaborators in the UW–Madison School of Pharmacy, the UW School of Medicine and Public Health and several other institutions in North and South America.

Streptomyces evolved about 380 million years ago and have since diverged into many lineages, some of which are more commonly found in soil or associated with insects. That evolutionary distance means that insect-associated microbes have adapted to their own unique environmental contexts.

“It follows that if you look in a different evolutionary context, you find new chemistry,” says Chevrette.

To survey a large portion of insect diversity, the Currie team collected more than 2,500 species across all major groups of insects, including flies, ants and bees, moths and butterflies, beetles and more. About a third were collected in tropical landscapes, and another third from temperate climates, with the remainder from arctic or other regions.

“We could collect 400 insects in a few days,” says Currie, whose own collecting assignment took him to Hawaii in winter.

More than half of those insects harbored the right kinds of bacteria. In all, the insects provided more than 10,000 microbes to test. The team isolated another 7,000 strains from soil or plant sources.

Then came the experiments — a lot of them.

Those 50,000 trials tested each microbe’s ability to inhibit the growth of 24 different bacteria and fungi, many of which, like methicillin-resistant Staphylococcus aureus, better known as MRSA, pose serious threats to human health.

A greater proportion of insect-associated microbes were able to inhibit the growth of these bacterial or fungal targets than were microbes isolated from soil or plants.

With Professor of Medical Microbiology David Andes from the UW School of Medicine and Public Health, the researchers tested several dozen promising microbe strains for their ability to fight infections in mice. Extracts from these microbes effectively killed both bacterial and fungal pathogens, and few demonstrated toxic side effects. 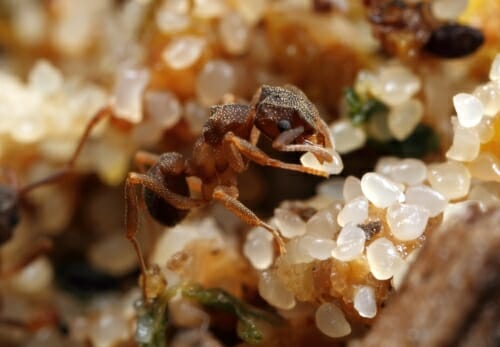 A Cyphomyrmex ant. These fungus-growing ants harbored a microbe that made the newly discovered antibiotic cyphomycin. Photo by Alex Wild

As a further proof of concept, the team worked with School of Pharmacy professor Tim Bugni to purify cyphomycin and determine its chemical structure. Cyphomycin was able to treat infection in mice by Candida albicans, an opportunistic fungal pathogen that often infects immunocompromised people. Cyphomycin also showed low toxicity in mice.

By demonstrating effective antimicrobial action and low toxicity in mice, the researchers have passed the first barrier to developing new antibiotics for clinical use in humans. But many promising drugs fail further along in development, which is why it is important to identify multiple candidate antibiotics in the early stages.

Currie’s team isn’t surprised that insect-associated microbes are a promising source of novel antibiotics. For one, they say, insects may help select for antibiotics that are not toxic to animals. And because many insects rely on microbial antibiotics to combat ever-evolving pathogens in their own environment, they have likely selected for antibiotics that can overcome common resistance mechanisms.

“The insects are doing the prospecting for us,” says Currie.