Tens of millions of people worldwide are affected by diseases like macular degeneration or have had accidents that permanently damage the light-sensitive photoreceptors within their retinas that enable vision.

The human body is not capable of regenerating those photoreceptors, but new advances by medical researchers and engineers at the University of Wisconsin–Madison may provide hope for those suffering from vision loss. They described their work today in the journal Science Advances.

Researchers at UW–Madison have made new photoreceptors from human pluripotent stem cells. However, it remains challenging to precisely deliver those photoreceptors within the diseased or damaged eye so that they can form appropriate connections, says David Gamm, director of the McPherson Eye Research Institute and professor of ophthalmology and visual sciences at the UW School of Medicine and Public Health.

“While it was a breakthrough to be able to make the spare parts — these photoreceptors — it’s still necessary to get them to the right spot so they can effectively reconstruct the retina,” he says. “So, we started thinking, ‘How can we deliver these cells in a more intelligent way?’ That’s when we reached out to our world-class engineers at UW–Madison.”

Gamm is collaborating with colleagues Shaoqin (Sarah) Gong, a professor of biomedical engineering, Wisconsin Institute for Discovery faculty member and an expert in biomaterials, and Zhenqiang (Jack) Ma, a professor of electrical and computer engineering and an expert in semiconductors whose lab is experienced in sophisticated micro- and nanofabrication. Together, their research groups have developed a micro-molded scaffolding photoreceptor “patch” designed to be implanted under a damaged or diseased retina. 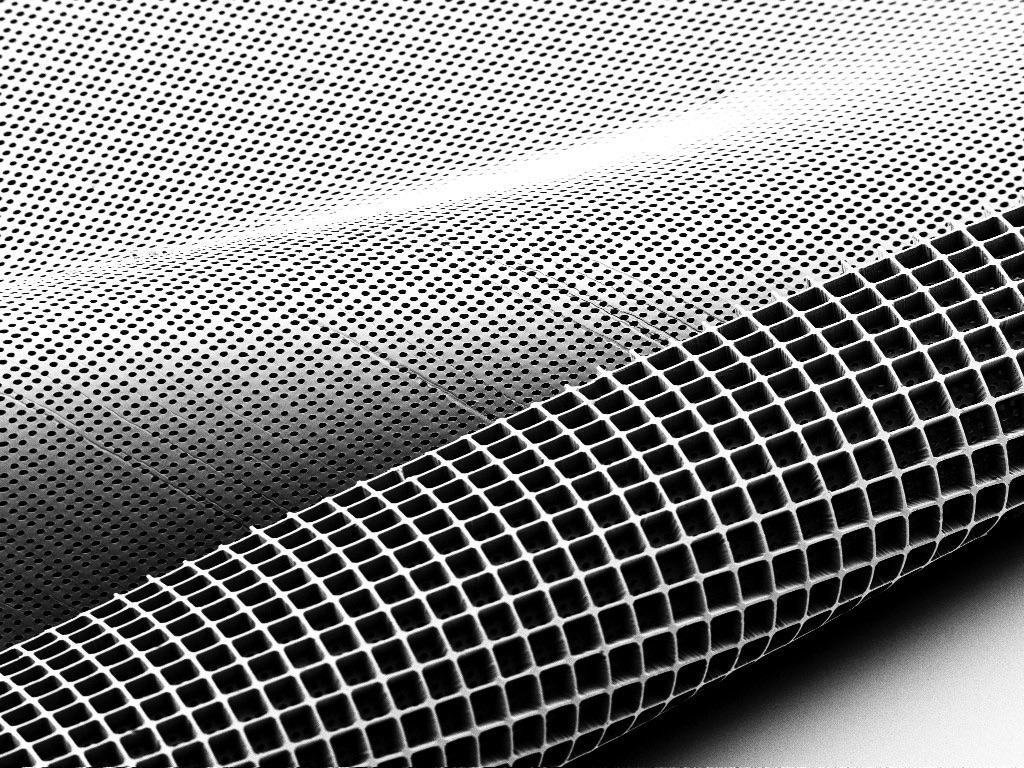 This electron microscope image of the new “scaffolding” for growing and implanting retinal cells shows the ice cube tray-shaped reservoirs that hold cells and cylinder-shaped holes in the bottom layer, which provide channels for maturing photoreceptors to make contact with a patient’s retinal tissue. Courtesy of the Ma Lab

In 2018, the team developed its first biodegradable polymer scaffolding with wine-glass-shaped pores to hold the photoreceptor cells in place. However, that design wasn’t optimal since it could not fit many photoreceptors in each pore.

In this second-generation scaffold, the team opted for an “ice cube tray” design, which can hold three times as many cells while reducing the amount of biomaterial used for the scaffolding to facilitate faster degradation of the synthetic material within the eye.

Gong and her team, led by graduate student Ruosen (Alex) Xie, screened a long list of potential biomaterials before deciding on poly(glycerol-sebacate), or PGS, a material that is compatible with the retina and can be safely metabolized by the body after degradation. The Gong lab optimized the formulation and further developed a curing process to achieve desirable material properties for making the scaffolds.

“We wanted the material to be very strong,” says graduate student and co-first author Allison Ludwig, who works in Gamm’s lab, “and in the eye, it degrades pretty quickly over about two months. That’s ideal for the human retina.”

The process of crafting the scaffold with the desired mechanical strength and precise dimensions was performed by co-first author Inkyu Lee and graduate student Juhwan Lee, who work in Ma’s lab. To achieve highly ordered 3D ice cube tray-shaped microstructures from the biodegradable and biocompatible PGS films with micron-sized features, they developed multi-step micro-molding techniques that can transfer patterns to flexible polymer films. 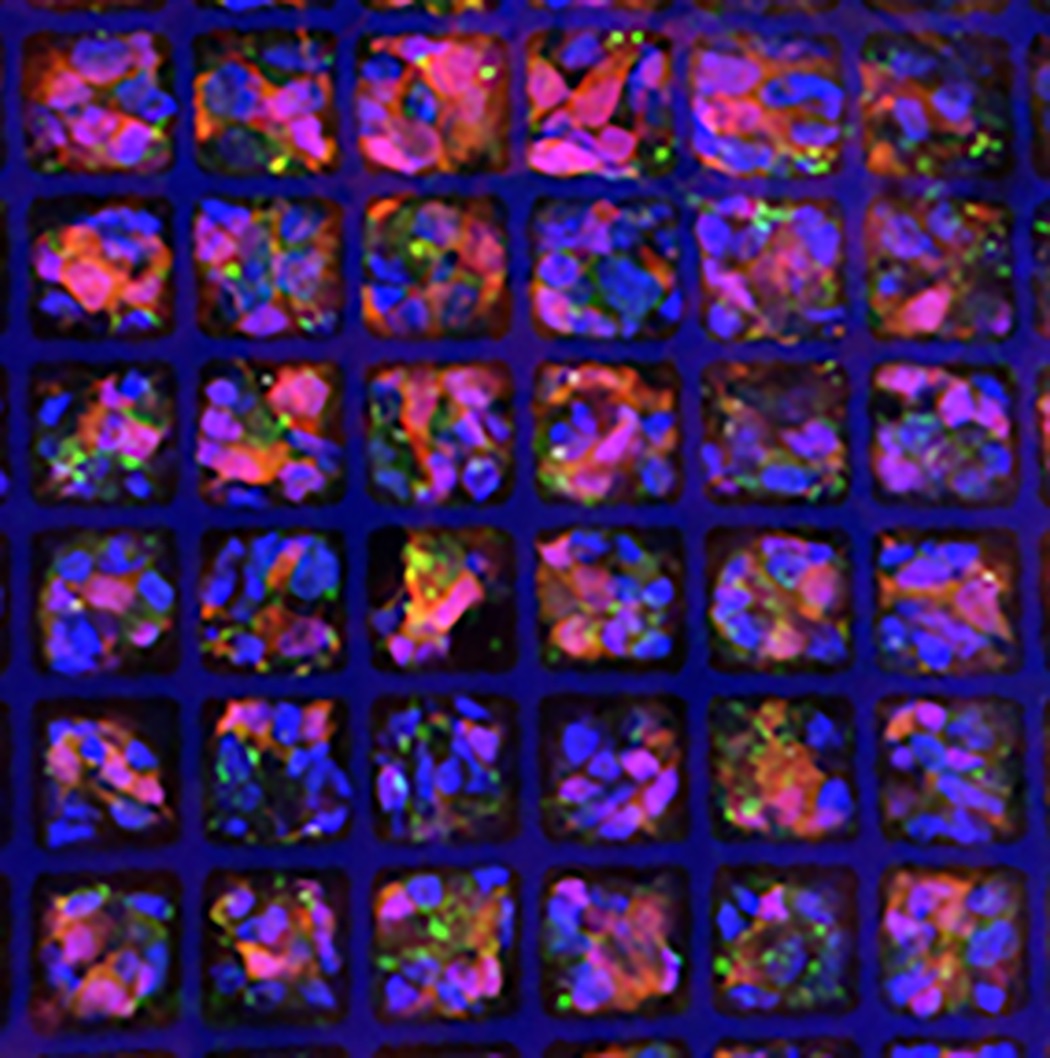 Photoreceptors grown from stem cells pack into a new ice cube tray-shaped scaffold to guide their development and implantation in patients’ eyes. Courtesy of the Ma Lab

The final scaffold fabrication work was tedious and frustrating. Fractures and imperfections occurred on the soft scaffolds during demounting from the micro molds, rendering the micro molds inoperable for further use — but Inkyu Lee ultimately discovered that soaking the scaffold in isopropyl alcohol allowed it to release cleanly.

“The fabrication processes creating a scaffold with micron-sized features involve a lot of person-dependent technical handling skills, which makes the production of scaffolds with a uniform quality difficult,” he says. “I wanted to achieve something that is repeatable regardless of an operator’s handling skills. I was enlightened by the fact that the PGS polymer swells in isopropyl alcohol. Exploiting this property ultimately facilitated the release of the scaffolds from the micro molds.”

Using this approach, Ma’s lab was able to reliably demount the scaffold from micro molds without surface defects and retain the mold’s microstructures, maintaining the mold surface integrity for reuse. In the end, microscopy revealed the fabrication technique was a success, reliably reproducing a perfect ice cube tray-shaped scaffold capable of holding more than 300,000 photoreceptors in approximately the area of the human macula, the center of the retina.

“Overall, the results are very exciting and significant,” says Ma. “Once we figured out the recipe, mass production became immediately possible, and commercialization will be very easy. The fabrication methods can be used to create many other types of soft scaffolds for various biomedical applications, such as complicated tissue engineering, etc.”

The team has disclosed the scaffold structure and the fabrication method to the Wisconsin Alumni Research Foundation, which has filed a patent application.

The team plans to continue optimizing its scaffolding shape, fabrication technique and bio-resorbable materials for faster production to satisfy future surgical needs. In the meantime, the current iteration of the scaffolding patch is almost ready for surgical testing in large animals. If successful, the patch will eventually be tested in humans.

“We’re hoping these early generation retinal patches will be safe and restore some vision. Then we’ll be able to innovate and improve upon the technology and the outcomes over time,” says Gamm. “We didn’t start out with supercomputers on our wrists and we’re not going to start out by completely erasing blindness in our first attempt. But we’re very excited about taking a significant step in that direction.”

This research was supported by the Department of Defense (grant No. W81XWH-20-1-0655), the National Institutes of Health (P51OD011106 and U54HD090256), the Foundation Fighting Blindness, the Harrington Discovery Institute, Research to Prevent Blindness, and the Carl and Mildred Reeves Foundation.