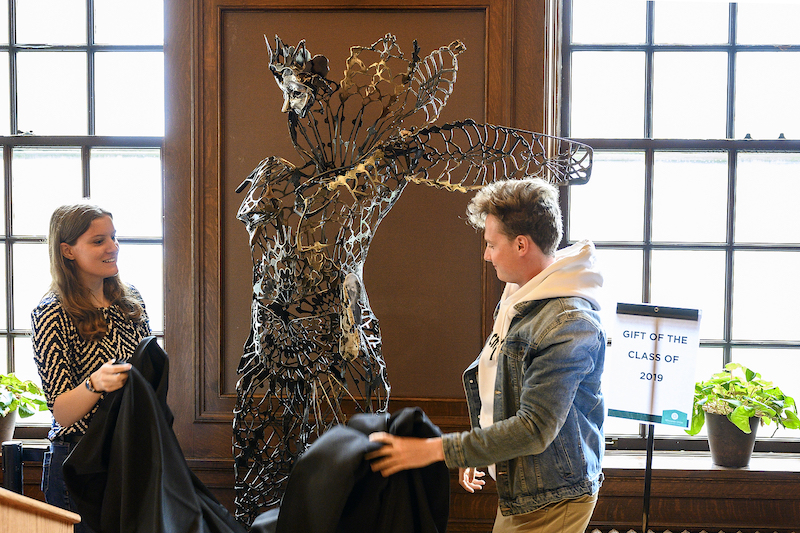 Senior class officers Mara Matovich (left) and Ronald Steinhoff (right) remove the temporary cover during a reveal event for the 2019 Senior Class Statue, titled “The Monarch,” inside the Hamel Reading Room at the Memorial Union. The statue celebrates the 150th anniversary of women receiving degrees at UW–Madison and was designed by artist Victoria Reed. Photo: Bryce Richter

Her hair isn’t flowing. Her figure is ambiguous.

“I didn’t want her to be defined by her physical characteristics,” says artist and UW alum Victoria Reed. “I wanted her to be above that – free from that.”

The statue is a gift from the 2019 senior class, with support from the 4W Initiative (Women, Well-being, Wisconsin and the World), the UW Foundation and the Wisconsin Union that celebrates the 150th anniversary of women earning undergraduate degrees at UW–Madison. 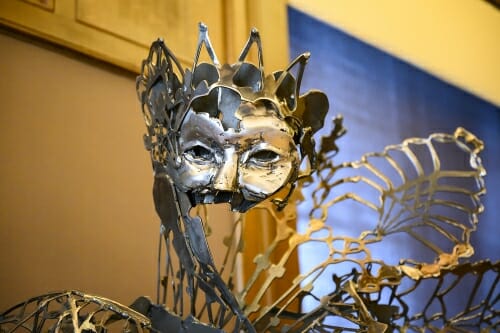 A closeup of the statue’s head. Photo: Bryce Richter

The class will also make a gift to the In Her Honor Chancellor’s Fund. This fund will help support campus programs aim to promote gender equity, make life better for women, and make the world better for all.

She sees the statue as not only as a symbol of female empowerment but of a representation of being welcome and open to all.

“We as individuals all look different on the outside but we think about many of the same issues,” she says.

Reed, who graduated from UW–Madison with a masters in art in 2016, was given a lot of freedom when commissioned to create the commemorative piece.

“Everything about this piece was challenging, from the deadline to the execution,” Reed says. “But that’s exactly what I look for. I don’t want it to be easy. I want to be challenged.”

As a woman in the male-dominated field of metal sculpture artists, being challenged is something she’s familiar with. When people learn she’s an artist, they often assume she’s a painter.

“I think it’s made me want to be really good at what I do,” Reed says. “You prove to yourself and others that you can do it.”

While women weren’t always welcome on campus, the senior class hopes this statue will serve as a reminder that women belong.

“We wanted to have something that will have a lasting legacy for our class,” says Senior Class Philanthropy Director and UW senior Zachary Klayman.

He’s seen plenty of strong women in his life, including both his grandmothers who are Holocaust survivors.

While past generations grew up being told what women couldn’t do, Klayman says his male friends are smart enough to know better.

“It’s so important that men stand beside women as well,” Klayman says. “I think we are the generation of change and I think generations to come will keep improving.”

To view a video the 2019 Senior Class made to celebrate UW Women at 150, visit here.