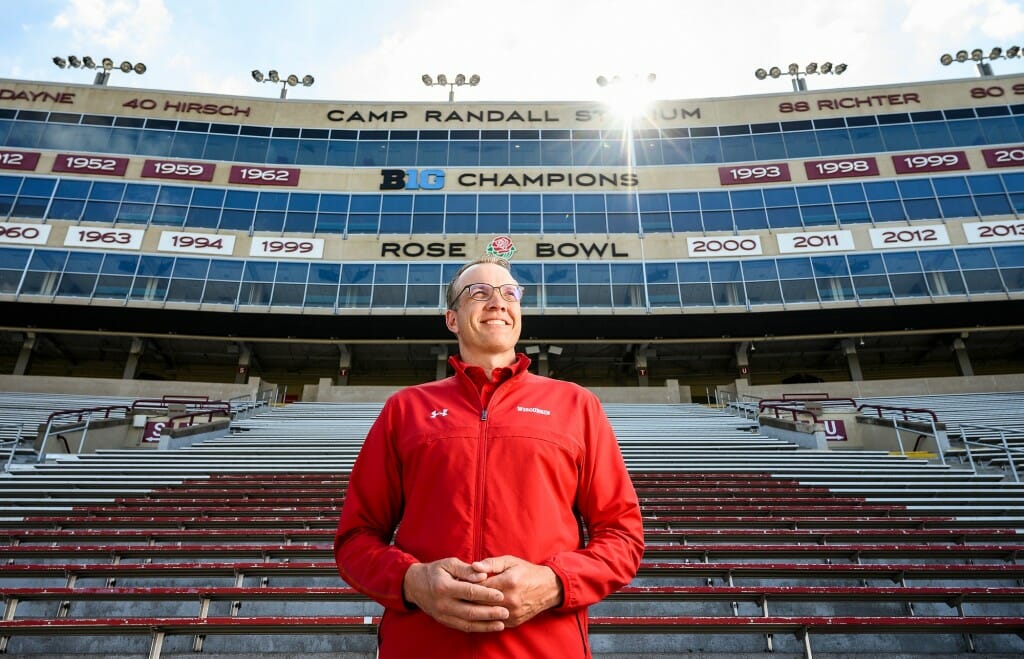 Chris McIntosh, University of Wisconsin–Madison deputy athletic director and a decorated student-athlete who captained two of the most celebrated teams in Badgers history, has been named to the post of director of athletics, Chancellor Rebecca Blank announced today.

“Chris is a natural leader who loves the Badgers and cares about our student-athletes,” says Blank. “He is uniquely positioned to continue our proud traditions of success on and off the field and doing things ‘the right way.’ Chris will build upon those traditions and has a strong vision for leading the program during a time of change in college athletics.”

Blank will introduce McIntosh at a 2 p.m. CDT Wednesday event at the Kohl Center. The event will be broadcast live on the Big Ten Network and Wisconsin Athletics social channels. Big Ten Commissioner Kevin Warren will also attend.

Since 2017, McIntosh has overseen the day-to-day operations of the department, student-athlete recruitment, business development, human resources and strategic planning.

“I owe so much to the University of Wisconsin, and I’m deeply honored to be able to succeed Barry Alvarez,” says the first-generation college graduate from Pewaukee, Wis. “We will build upon our legacy of success on the field of competition and support our student-athletes in the classroom, on campus and after college.” 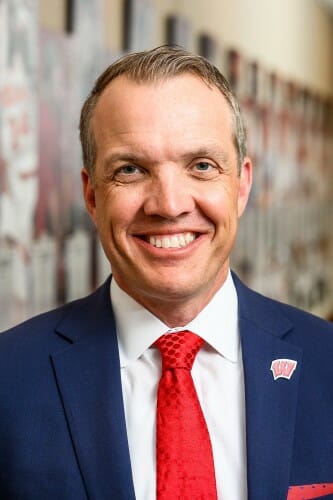 Prior to his deputy athletic director role, McIntosh joined the department in 2014 and served as associate athletic director for business development, responsible for identifying and developing sources of revenue for UW Athletics, becoming well-versed in the economics and administration of college athletics.

As part of his athletic career, he captained the 1999 and 2000 Rose Bowl teams, two of the most storied teams in Badgers history. He was a consensus NCAA All American in 1999 and 22nd pick in the 2000 NFL Draft, playing professionally for the Seattle Seahawks until 2004. He is a member of the Badgers Hall of Fame.

He holds a master’s degree in educational leadership and policy analysis and a bachelor’s degree in agricultural and applied economics, both from UW–Madison. Before returning to campus, he launched a number of successful new business startups.

But McIntosh says that it was his time as a student-athlete and team leader that best positioned him for the role he is about to assume.

“When I was a football player, Coach Alvarez taught our team fundamental principles that benefited my life,” he says. “These were techniques to succeed in a program in football, but years later, it became apparent that he taught us something much more important than how to win on Saturdays.”

For McIntosh, those lessons also translated into developing programs and activities to support athletes on and off the field and later in life. These include the Forward360 program and a renewed emphasis on student-athlete outcomes, including health and wellness, academics, mental health and career placement.

“Our responsibility is to develop young people, so they can be successful for the rest of their lives,” he says. “While we have celebrated plenty of victories, arm-in-arm while singing ‘Varsity,’ winning is only one part of that development responsibility. Our mission is to set our student-athletes up for success long after their playing careers are completed.”

Ensuring the department is a diverse and welcoming place for employees and student-athletes will continue to be a top priority, he adds. McIntosh initiated the department’s Diversity & Inclusion strategic plan and helped found the new Equity and Diversity Council within the department.

“I’m confident that Chris will continue to integrate diversity, equity and inclusion best practices into the DNA of our Athletic Department, recognizing that these efforts are an important part of our success,” says Blank.

“We will build upon our legacy of success on the field of competition and support our student-athletes in the classroom, on campus and after college.”

Big Ten leaders were quick to weigh in on the decision.

“Chris McIntosh is an excellent choice to serve as the athletic director at the University of Wisconsin,” says Big Ten Conference Commissioner Kevin Warren.

“Growing up in Pewaukee, being a successful Badger student-athlete, playing in the National Football League, and learning the vital elements of intercollegiate athletics under Barry Alvarez provides Chris with the necessary foundation to succeed.”

“Chris is an excellent hire and is uniquely prepared to lead the University of Wisconsin Athletic department,” adds Gene Smith, who has served as athletic director at Ohio State since 2005.

“He has the highest of integrity, knows the culture of Badger athletics, is respected by his peers in the Big Ten Conference and will bring the former student-athlete experience to his leadership style, which I feel is invaluable.”

The process to identify the athletic director moved quickly and thoroughly and included a wide range of perspectives from the search committee and other stakeholders, says Peter Miller, Athletic Board chair and professor in the School of Education, who also led the search committee. An extensive recruitment was launched, drawing 35 applicants.

“I’d like to thank the committee for its work and I’m glad that we were able to identify the best candidate right here at home,” Miller says.

Media members are invited to attend the Chris McIntosh introduction event and news conference that will begin at 2 p.m. CDT Wednesday at the Kohl Center.

The event will also be carried live on the Big Ten Network and across Wisconsin Athletics social channels.

Media with G passes can park in Lot 91 on Frances Street. All media must enter the Kohl Center through the media gate. The media gate will be staffed beginning at 1:15 p.m. Please plan to arrive at the Kohl Center by 1:45 p.m. as the event will begin promptly at 2 p.m.

Media members will not be permitted to record the introduction event that will take place prior to the news conference. TV affiliates will be provided a clean copy of the entire event afterward. For outlets interested in recording the news conference, cameras will need to be set up in that portion of the arena by 1:40 p.m.