On Monday, Jan. 16, the nation will pause to remember the legacy of Martin Luther King Jr. and the continuing struggle for equality.

“A piece of freedom is not enough for us as human beings. A piece of liberty no longer suffices. Freedom is like life. Freedom is one thing. It is indivisible. You have it all, or you are not free.”

Those were the words of King as he addressed a full house at the Stock Pavilion on Nov. 23, 1965. By that time, King had already earned the Nobel Peace Prize for leading the fight against racial inequality through nonviolent resistance. 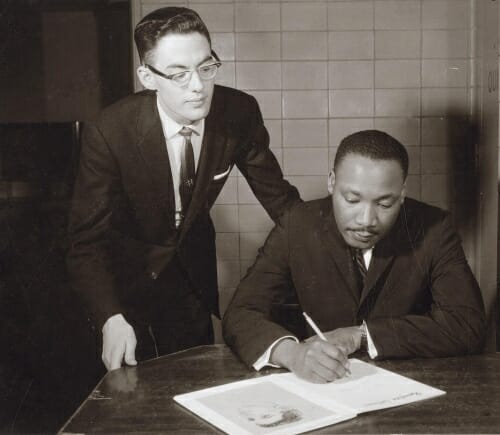 Student committee members of the Wisconsin Union Directorate lobbied to bring King to campus, and Paul Mennes extended the invitation. According to a 2006 article in the Badger Herald, Mennes also served as King’s personal campus tour guide. “(King) was one of those people who, if he met 10 people in two minutes, he would remember everyone’s name and everything about them,” Mennes said.

A crowd of nearly 3,000 — almost exclusively students — gathered in the Stock Pavilion to see King. He gave a speech titled “The Future of Integration,” in which he defined what came to be known in the civil rights movement as a “period of constructive integration.”

“We find ourselves standing on the threshold of the most creative period in the development of race relations in the history of our nation,” King told his audience. “We have moved through the wilderness of ‘separate but equal,’ and now we stand on the border of the promised land of integration.”

The speech discussed the importance of nonviolent protests, which had been a staple of the movement. “The nonviolent resistors can summarize their message in the following simple terms,” he said. “We will take direct action against injustice without waiting for other agencies to act … We will always be willing to talk and seek fair compromise, but we are ready to suffer when necessary and even risk our lives to become witnesses to the truth as we see it.”

It was King’s second visit to the Madison campus. He also spoke at the Wisconsin Union Theater on March 30, 1962.

UW–Madison will hold its MLK Day celebration on Monday, Jan. 23, at the Memorial Union. The event will recognize, celebrate and honor the life of King in an evening with Benjamin Jealous, a social entrepreneur, change-maker and former NAACP president.