The ad follows Scout’s journey as a cancer survivor, celebrates the work being done at the UW School of Veterinary Medicine, and encourages viewers to donate to the school’s cancer research efforts.

When clinicians at the University of Wisconsin School of Veterinary Medicine began caring for Scout in July 2019, they had no idea they would soon inspire, and appear in, a Super Bowl commercial.

But they had a canine star on their hands, and a very appreciative client who set in motion the ad’s production. As Super Bowl LIV airs Sunday, Feb. 2 on FOX, Scout will appear alongside members of the school’s faculty and staff who have been part of the 7-year-old golden retriever’s cancer treatment journey.

The new 30-second commercial, titled “Lucky Dog,” will air during the game’s second quarter and was paid for by WeatherTech, manufacturer of automotive accessories and home and pet care products. Scout is a member of the family of WeatherTech founder and CEO David MacNeil. 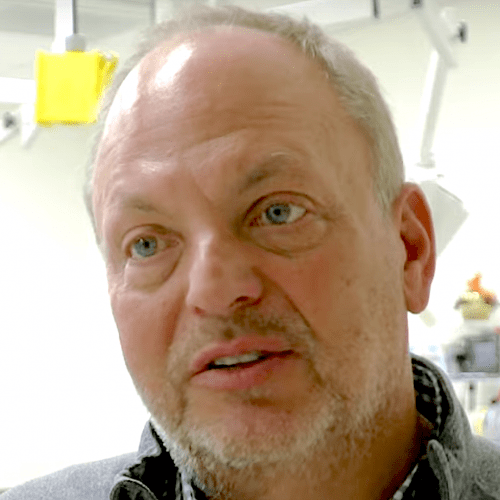 The ad follows Scout’s journey as a cancer survivor, celebrates the work being done at the UW School of Veterinary Medicine, and encourages viewers to donate to the school’s cancer research efforts at weathertech.com/donate.

This is the first time UW–Madison has been the subject of a Super Bowl commercial. It was created by Chicago-based agency Pinnacle Advertising and filmed in December at the school and its teaching hospital, UW Veterinary Care.

“This is an amazing opportunity not only for the University of Wisconsin–Madison and the School of Veterinary Medicine, but for veterinary medicine worldwide,” says Mark Markel, dean of the School of Veterinary Medicine. “So much of what’s known globally today about how best to diagnose and treat devastating diseases such as cancer originated in veterinary medicine. We’re thrilled to share with Super Bowl viewers how our profession benefits beloved animals like Scout and helps people, too.”

Cancer is the number one cause of illness and death in the aging dog population. Having lost his last three dogs to cancer and with Scout now also affected by the disease, efforts to advance life-saving treatments and technology are close to MacNeil.

“Scout’s illness devastated us,” says MacNeil. “We wanted this year’s Super Bowl effort to not only raise awareness, but also financial support for the incredible research and innovative treatments happening at the University of Wisconsin School of Veterinary Medicine, where Scout is still a patient. We wanted to use the biggest stage possible to highlight Scout’s story and these incredible breakthroughs, which are not just limited to helping dogs and pets. This research will help advance cancer treatments for humans as well, so there’s the potential to save millions of lives of all species.”

“We’re thrilled to share with Super Bowl viewers how our profession benefits beloved animals like Scout and helps people, too.”

A beloved family pet and WeatherTech’s unofficial mascot, Scout can often be seen around the company’s offices in Bolingbrook, Illinois. He appeared in WeatherTech’s 2019 Super Bowl commercial and is the face of advertising for the company’s pet products.

Last summer, however, tragedy struck when Scout collapsed at home. He was rushed to his local animal hospital, where an ultrasound revealed a tumor on his heart. Scout was given a grave prognosis: a life expectancy of no more than one month. He was diagnosed with hemangiosarcoma, an aggressive cancer of blood vessel walls.

Searching for more information, Scout and his family rushed to UW Veterinary Care on the recommendation of their local veterinarian. There, specialists with the emergency and critical care and oncology teams stabilized Scout’s condition and arrived at a cutting-edge treatment plan.

The story of the veterinary care that is the basis of Scout’s WeatherTech Super Bowl commercial, as told by David MacNeil and the School of Veterinary Medicine team. Video by UW–Madison.

In mid-July, he began chemotherapy at UW Veterinary Care, followed by radiation therapy targeting his heart tumor. He also received immunotherapy aimed at stimulating his immune system to attack cells expressing specific tumor proteins. Just a month later, Scout and his family received good news: His heart tumor had decreased in size by 78 percent. By September, the tumor was 90 percent smaller than its original size. Today, Scout’s heart tumor has all but disappeared.

“Scout is kind of the perfect patient in that he’s tolerated multiple modes of therapy very well, his primary tumor has responded beautifully to treatment, and we’ve been able to maintain his quality of life at a very high level,” says David Vail, professor of comparative oncology at the School of Veterinary Medicine. “At the end of the day, Scout’s quality of life is his family’s most important concern, as it is ours.” 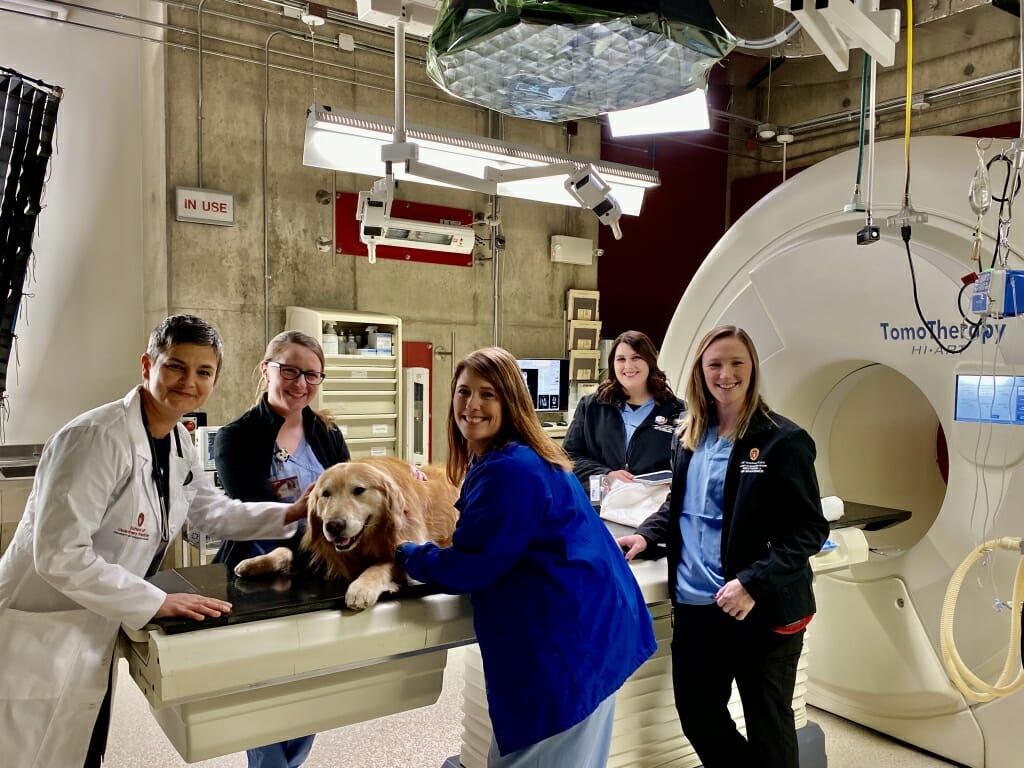 The treatments Scout received are the result of years of scientific inquiry involving experts and collaborations from many different fields. Oncologists at the UW School of Veterinary Medicine, where more than 3,500 patient visits were seen in 2019 through the Oncology Service, are world-renowned for advancing clinical treatments for dogs and cats with cancer.

The school is also a leader in comparative oncology research, where companion dogs and cats are included in clinical trials to investigate new cancer therapies with the goal of informing clinical treatments in both animal and human patients. The goal is to create new cancer diagnostics and treatments that result in a bidirectional flow of information between veterinary patients and people.

Dogs and people not only share similar cancer rates — about one in four dogs and one in three people will develop cancer in their lifetime — but naturally occurring tumors in dogs often share almost identical characteristics to human cancers in terms of recurrence and spread (metastasis), response to treatment and more.

“We wanted to use the biggest stage possible to highlight Scout’s story and these incredible breakthroughs, which are not just limited to helping dogs and pets.”

Past clinical studies at the School of Veterinary Medicine have yielded new technologies and treatments with better effectiveness and less toxicity. For instance, successful clinical trials in pet dogs with naturally occurring nasal tumors in the early 2000s at UW Veterinary Care led to widespread use of TomoTherapy in human medicine. This state-of-the-art machine, developed at UW–Madison, uses CT-guided radiation treatments to attack cancer with pinpoint accuracy while sparing nearby healthy tissues — a form of treatment that Scout benefited from.

The school is also one of three institutions participating in a five-year clinical trial to test a vaccine for the prevention of many types of cancer in dogs — a potential paradigm shift in veterinary and human medicine.

Funds raised by the Super Bowl commercial (100 percent of gifts) will be used to support research at the School of Veterinary Medicine to better diagnose, treat and prevent cancer and for the purchase of specialized equipment that will aid clinicians and researchers in identifying new cancer-fighting drugs and treatments — discoveries that are shared with the world.

“Having the opportunity to use and apply this ‘one medicine’ approach more globally will allow us to aid veterinary patients while also helping humans with cancer. It’s a huge need that we are working to move forward and we are extremely grateful for the support,” says Vail.

To watch the commercial, visit: https://www.youtube.com/watch?v=Fi2WwRJDii0