Lonnie Berger to be associate vice chancellor in the social sciences

Berger replaces Nora Cate Schaeffer, professor of sociology, who has served in the interim role since August 2019. Schaeffer, who was associate chair of the sociology department from 1997 to 2001 and has been faculty director of the UW Survey Center since 2003, is retiring this summer. 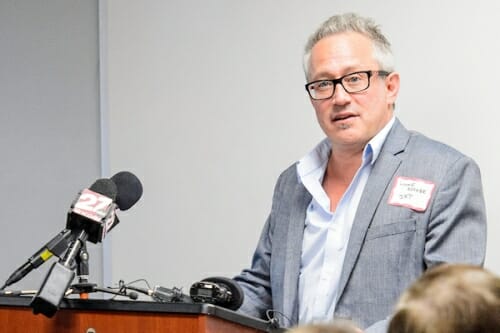 “I’m very grateful to Nora Cate for her support of the social sciences and it has been invaluable having her expertise in the research office during the COVID-19 pandemic and having her on our team as we have faced the challenges that COVID-19 has presented to research on campus,” says Steve Ackerman, vice chancellor for research and graduate education.

As Schaeffer did before him, Berger will continue to provide leadership for the social sciences divisions, including divisional area faculty recruitment and retention, grant matches, research center reviews, faculty awards and professorships, and fall competition awards.

“Lonnie’s experience and accomplishments as IRP Director have prepared him well to take on the wide-ranging duties of an associate vice chancellor,” says Ackerman. “Lonnie is also a strong advocate for continuing to diversify our exceptional faculty and graduate student populations.”

As IRP director, Berger worked with campus colleagues to identify, recruit and retain talented faculty and graduate students from underrepresented communities. Ackerman believes these skills will be a benefit to the OVCRGE, especially as UW–Madison strengthen its efforts to attract and retain a more diverse pool of researchers and scholars.

Berger received his Ph.D. in social work from Columbia University and joined the UW faculty in 2004. His research focuses on the ways in which economic resources, sociodemographic characteristics and contexts, and public policies affect parental behaviors and child and family wellbeing.

While at the UW–Madison, he has been extensively involved in UW’s social science research community and has taken on multiple administrative and leadership roles.

As the director of the IRP, Berger led the institute’s successful bid to become the National Poverty Research Center. He created a consortium represented by 10 university-based poverty research centers throughout the country with the goal of capturing the centers’ combined resources to inform mutual, synergistic poverty research and policy agendas.

As director of the IRP, Berger also led UW’s successful effort to become one of four universities chosen for Schmidt Futures’ Alliance for the American Dream. The initiative is a large-scale, multi-university effort to increase the net incomes of 10,000 middle-class households within the communities in which the universities are located, either by raising income or decreasing cost of living.

“I am honored for the opportunity to join the OVCRGE team, which plays such a crucial role in initiating and advancing cutting-edge research programs on campus and supporting UW’s world-class researchers, graduate education, and research centers,” says Berger. “The OVCRGE’s mission is inextricably linked to the Wisconsin Idea and is core to ensuring that UW remains among the top research institutions in the world.”

Berger has recently been in Paris, France on sabbatical and starts his new position in the Office of the Vice Chancellor for Research in July.