Leckrone back with the band after double bypass surgery 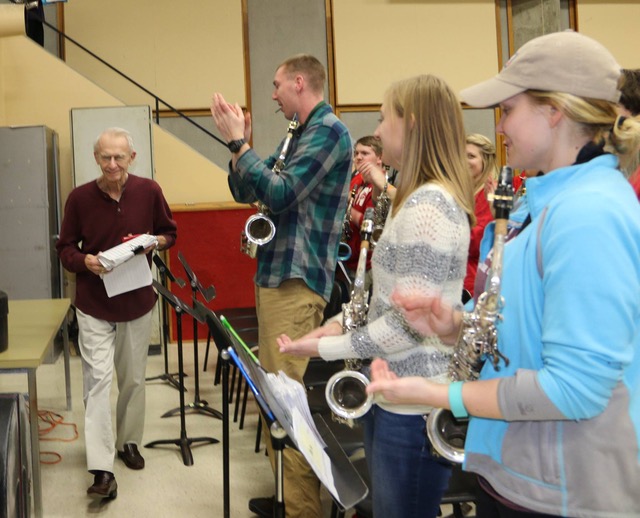 Mike Leckrone has a secret.

Eagle-eyed fans may be wondering why the iconic band conductor has been missing from University of Wisconsin sporting events, especially NCAA basketball tournaments.

“I had double-bypass heart surgery,” explains Leckrone, 80. It occurred Jan. 24, and he didn’t return to the Mead Witter School of Music until March 15 to rehearse his 300-member Varsity Band for two hours before Spring Break.

There was loud applause and some teary eyes – and a great deal of wariness about returning to work. He received permission from his physician only that morning.

“I’m anxious to get back, of course,” says Leckrone, who became conductor of the UW marching band in 1969. “Besides tournaments we’ve got the big concert coming up.”

In the spring semester the marching band is called Varsity Band. Its biggest event of the year – the three-night Varsity Band Concert at the Kohl Center – is less than a month away (April 20-22). Besides conducting, narrating and performing stand-up, Leckrone annually performs a variety of stunts, such as “flying” mid-air in a harness connected to overhead wires. His somersaults high above the audience are a tradition and also his all-time favorite activity.

That’s been firmly ruled out, and Leckrone is looking for other aerial activities.

“The honest truth is that I’m not entirely sure what I’m going to be able to do,” he says. “We’re kind of planning contingencies, with a Plan A, Plan B and Plan C.” 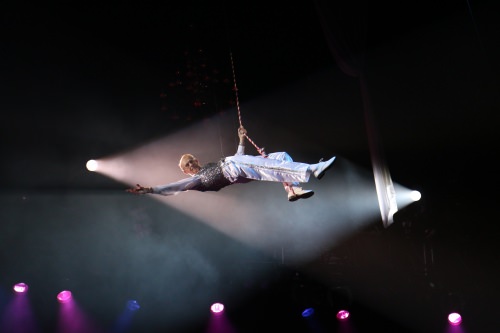 Leckrone will need to take it easy on the high wire this year. (Photo by Gary Smith)

The need for surgery came as a big surprise to Leckrone, who’s famous as much for his stamina and good health as for his leadership of the Badger Band. For weeks, band staff explained only that his absence was due to a “procedure.”

“I’m certainly not the first person who’s been fortunate enough to have this kind of surgery,” he says. “I had full confidence in my team at UW Hospital, and I’m even more impressed with them now that I know them better. They are all amazing people, real heroes. But at the time, I didn’t want anyone to worry about me.”

Before he went in for surgery, the theme had already been chosen for this year’s concert: “Nobody Does It Better,” a song from the 1977 James Bond
film “The Spy Who Loved Me.”

It was meant to compliment the band. Lately, however, band members have suggested that the theme should not reflect on them, but on their leader, Leckrone. Others have taken it upon themselves to informally rename the concert, “This One’s for Mike.”

Leckrone has his own ideas about a new theme.

“Only half-kidding, I kind of like, ‘Let’s See If He Can Make It Through the Show,” he says, laughing.

During Leckrone’s absence band department personnel pulled together to cover for him, notably Scott Teeple, assistant director of bands Darin Olson, and Varsity Band Concert production manager Sarah Marty. Leckrone will not travel with the band to this week’s NCAA tournament game, but he will
if the Badgers play next week.

Besides audience participation numbers, multimedia displays and pyrotechnics, the 44th annual concert will feature selections from The Beach Boys, “Fiddler on the Roof” and “The Lion King.” Special guests will include trumpeter Grant Manhart, the UW Spirit Squad, Bucky Badger and a few surprises.

By popular request, a new ticketing system has been put in place this season, so that patrons may select their seats online. The concert has also been moved a half-hour earlier, to accommodate families with small children, and also travelers. Fans attend from nearly every county in the state, as well
as Illinois, Iowa, Michigan and Minnesota.

“If you’ve never been to the concert, you have no idea how big it is,” says Leckrone. “It’s a musical circus, an indoor Fifth Quarter, and we have plenty of seats for everyone.”

The 2017 Varsity Band Concert will be held at 7 p.m. Thursday through Saturday, April 20-22, at the Kohl Center. Tickets are $23. Group and UW student rates are available for the Thursday performance. Children under the age of two do not need a ticket, provided they are accompanied by an adult and do not occupy a seat. Tickets and more information are available here and at badgerband.com, and by calling 1- 800 GO BADGERS.

**** ART IS AVAILABLE, INCLUDING LECKRONE’S RETURN TO THE BAND ON WEDNESDAY,
MARCH 15. ****
https://uwmadison.app.box.com/s/xtst6a7ccts33eq0bsnsg5t91fg9fwhq

FACT SHEET:
Pronounced LECK-rone
The Varsity Band is a one-credit class at the Mead-Witter School of Music. Its members come from every UW
college and department. They perform at football, hockey, basketball and other UW sports events.
Rehearsal time can add up to as much as 20 hours per week during marching season, and service is a
requirement.
The first Varsity Band Concert was March 21, 1975, in Mills Concert Hall at the Humanities Building.
The annual concert is a fundraiser for the Marching and Varsity Bands, and additionally assists the UW’s
five concert wind ensembles.
Around 21,000 annually attend the Varsity Band Concert.