UW­–Madison graduate student Colin Rohm is being remembered by his campus colleagues as a scholar of uncommon talent and wide-ranging passions who nurtured the intellectual curiosity of thousands of his fellow students as a gifted advisor.

Rohm, 26, died Nov. 21 at UW Hospital in Madison. The cause was bacterial pneumonia and complications of Type 1 diabetes, according to his family.

Rohm’s campus reach was extensive. At the time of his death, he was working full-time as an academic advisor with UW Cross-College Advising Service (CCAS) while pursuing two graduate degrees and teaching two freshmen seminars. 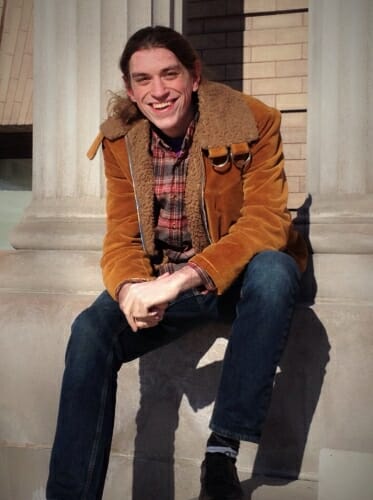 “When I imagine the perfect outcome of a University of Wisconsin education, I imagine Colin Rohm,” says Singer, praising his quest for knowledge and generosity of spirit. “He was a sought-after advisor because of his ability to connect with students and to help them discover their own talents and interests. In his short life, he left a big impact on UW–Madison and our students.”

Born and raised in Stevens Point, Wisconsin, Rohm arrived on campus as an undergraduate on a four-year music clinic scholarship, playing double-bass in the UW Symphony. He had been a music standout at Stevens Point Area High School, graduating in 2009 as a valedictorian and National Merit Scholar.

Early on in his undergraduate career, he was hired by CCAS as a peer advisor, the beginning of an extended period in which Rohm helped many of his fellow students explore their academic options and select and enroll in classes. As word of Rohm’s expertise spread, he was hired by multiple entities across the campus to advise students, says Timothy Walsh, CCAS director.

“He was one of the best peer advisors we’ve ever had,” Walsh says. “Students would go out of their way to see him. He could instantly strike up a rapport with them.”

Over time, Rohm worked as an advisor for the history department, the economics department, and the Letters & Science Honors Program. His position often included advising incoming freshmen in the summer at Student Orientation, Advising and Registration (SOAR).

“For those of us who shared a classroom with him, we will remember Colin as curious, bright, cheerful, and kind.”

“He was beloved by students,” says Sabine Gross, faculty director of the L&S Honors Program, who estimates that Rohm advised upwards of 1,000 students during the three years he worked for the program. “He was so alive to the possibilities of life — academic and otherwise — and he was always happy to share that with students.”

“I think of him as one of the true Renaissance people I’ve met, so conversant in math, economics, history, education and public policy,” says professor William Reese, Rohm’s advisor in educational policy studies. “Yet he was the epitome of Midwestern modesty — someone of enormous talents who was so sweet and gentle and down to earth. Colin was forever with a smile on his face and a good word about other people.”

Rohm cared about understanding how the world works, and how to make it better, says Donald Moynihan, director of the La Follette School of Public Affairs.

“For those of us who shared a classroom with him, we will remember Colin as curious, bright, cheerful, and kind,” he says. “He had a polymath’s love of learning, reflected by his wide array of interests, ranging from music, public policy, history, and math. His enthusiasm was infectious. He will be sorely missed.”

Rohm owned neither a car nor bike, so he often could be spotted lugging a huge backpack full of books to some of his favorite campus sites, such as Memorial Library, the Wisconsin Historical Society and the Memorial Union Terrace.

“He loved the university,” says his older brother Garrick Rohm of Madison, a 2010 UW–Madison graduate. “He especially loved helping students who didn’t know what they wanted to do at UW. He could peel back the curtain and show them the impressive breadth that UW offers.”

A memorial service will be held at 11 a.m. Thursday, Nov. 30, at Trinity Lutheran Church, 1410 Rogers St., Stevens Point. An informal gathering is being planned on campus to share stories about Rohm and to celebrate his life. Details will be released on the Cross-College Advising website when they become available.