Representing Wisconsin in the U.S. Senate for 24 years, Herb Kohl demonstrated his deep commitment to public service and his ethos of civility in public debate and policymaking. A $10 million gift announced today from Herb Kohl Philanthropies to the University of Wisconsin–Madison’s La Follette School of Public Affairs will extend the reach of that legacy.

Kohl’s donation, the Kohl Initiative, focuses on three priorities that will expand the School’s public outreach mission, advance the training of future public leaders and support influential research by faculty and students. It is the largest donation in La Follette School history. 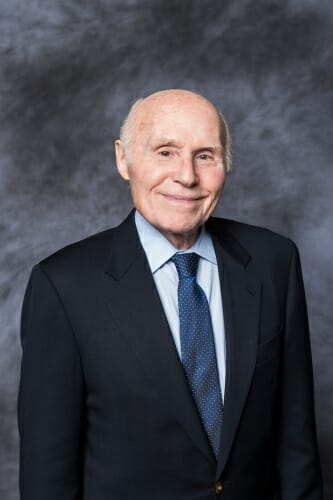 “Today, more than ever, we need strong public and private sector leaders – people like Sen. Kohl, who thoughtfully and respectfully discuss thorny policy issues,” said La Follette School Director and Professor Susan Webb Yackee. “UW–Madison has seen tremendous growth in civic engagement among its students, and this gift will allow the La Follette School to educate many more future leaders, who will tackle the world’s toughest problems with an evidence-based approach.”

Chancellor Rebecca Blank said the university is deeply grateful for Sen. Kohl’s generosity to his alma mater, his support of education across the state, and his decades-long service to the state and country in the U.S. Senate.

“Sen. Kohl has shown lifelong dedication to UW–Madison and this gift will provide tremendous opportunities for our students, faculty, staff and community,” said Blank, who holds an appointment as a La Follette School faculty member. “The Kohl Initiative embodies the Wisconsin Idea ­– especially the initiative’s outreach innovation fund, which will help expand the school’s impact in the state and the nation.”

Sen. Kohl, who was a founding member of the La Follette School’s Board of Visitors, believes the School is critically important for solving many of the country’s most difficult issues.

“Our democracy is being threatened by bitter partisanship, and the La Follette School is poised to lead by example – fostering cooperation, respectful discourse, and service to others,” said Kohl. “The school’s commitment to be a convener of thoughtful debate and evidence-based research provides a critical path for moving our country forward.”