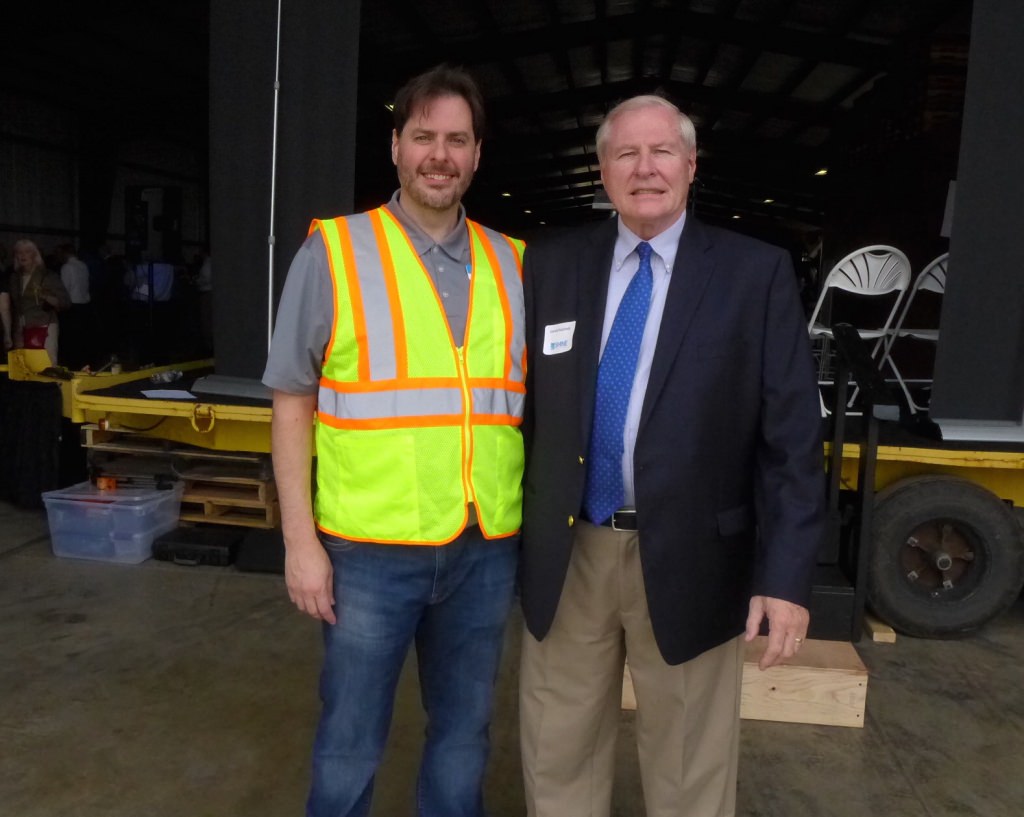 SHINE Medical Technologies, a firm spawned from research in the University of Wisconsin–Madison College of Engineering, broke ground today on “Building One” at its new location just south of Janesville. SHINE’s technology proposes to eliminate the use of highly enriched uranium in making molybdenum-99.

Moly-99 decays into a second isotope that is needed in more than 40 million medical imaging procedures annually. Moly-99, currently imported from South Africa and Australia, is necessary for scans to detect cancer and assess blood flow in the heart, says SHINE founder Greg Piefer. These diseases are the biggest causes of mortality in advanced countries.

In addition to private investment, the company has received a $25 million grant from the Department of Energy, intended to reduce the “diversion” of weapons-grade uranium into the black market. Uranium is needed for current production practices, but not for SHINE’s process.

“SHINE is just one example of a company, benefiting from federally funded research, that is helping fuel U.S. economic growth and helping create jobs throughout the state of Wisconsin,” said Ian Robertson, dean of the College of Engineering.

The SHINE campus is located across U.S. Highway 51 from the Southern Wisconsin Regional Airport. That proximity will speed shipment of moly-99, which decays at 1 percent per hour, and thus must be transported and used as fast as possible. 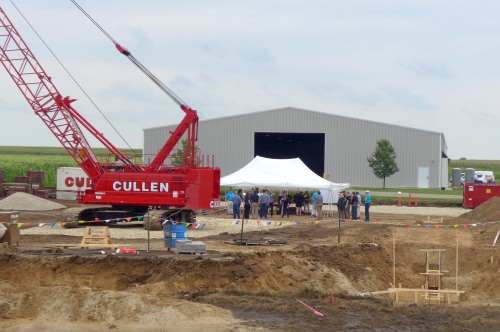 “No job in the 21st century is irreplaceable,” U.S. Rep. and House Speaker Paul Ryan, R-Janesville, told the assembly, “but the key is to keep ahead of the curve, and land the kind of high-skill manufacturing jobs that are as close to irreplaceable as possible, so when our kids get out of school, they will want to stay here. That does not happen by accident … We have great research, a great educational system here in Wisconsin, from Ph.D. engineering to really good skills training” from technical colleges.

SHINE’s production will depend on fusion created with a neutron accelerator that Piefer began pondering as a graduate student with Gerald Kulcinski, now professor emeritus of engineering physics at UW–Madison and director of its Fusion Technology Institute.

Theoretically, fusion could supply an unlimited amount of electricity with lower environmental impact than fossil fuel or fission energy, if many technical obstacles can be overcome. And so Kulcinski advocated a search for near-term uses of fusion, thinking that fusion enterprises that sidestepped the problem of making electricity would develop technology and expertise, and paradoxically advance the holy grail of fusion energy.

Piefer pursued that vision in two steps. First he founded Phoenix Nuclear Labs, a Madison firm that makes the neutron accelerator he invented. With their ability to transform one element to another, these accelerators will be at the heart of SHINE’s production in Janesville. 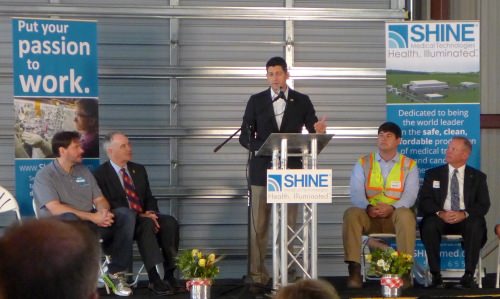 The second step was to found SHINE, a larger enterprise that entailed research and development, fundraising, and approval from the Nuclear Regulatory Commission and players in the current moly-99 supply chain.

Just before the ritual groundbreaking in Janesville, Piefer told the crowd that he had absorbed far more than just technology from his mentor. “I learned a ton from this man Gerry Kulcinski, not just about science and technology, but about how to conduct and carry myself, about who I am as a person.”

Kulcinski recalls Piefer as “a great student who was more at ease in the lab than in the classroom. If something went wrong with somebody else’s experiment, he would fix that. He was very much a team member. This did not fall out of the sky; these guys worked very hard to get this done.”

Building One, at 11,000 square feet, will consist mainly of lab space, where the techniques for making moly-99 can be refined so the product can be proven to the medical establishment that is SHINE’s market. The first commercial shipment is expected in early 2020, by which time SHINE is projected to have 150 employees.