Developing renewable, plant-based alternatives for petroleum-derived chemicals is a major piece of the effort to transition away from a fossil-fuel based economy toward a more sustainable and environmentally friendly bio-based economy. But integration of novel and unproven technology into existing industrial systems carries an element of risk that has made commercialization of such advances a significant challenge.

In new research, published recently in the journal Energy and Environmental Science, a team from the Great Lakes Bioenergy Research Center and the University of Wisconsin–Madison describe an efficient and economically feasible process for producing HMF — 5-hydroxymethylfurfural, a versatile plant-derived chemical considered crucial for building a renewable economy.

What’s more, the process is simple and compatible with the existing infrastructure in the high fructose corn syrup industry, the researchers show.

“We integrated into a current process to reduce the initial risk quite a bit and decrease the initial capital required to put things on the ground to prove the technology,” says Ali Hussain Motagamwala, who led the project while a UW–Madison graduate student in chemical and biological engineering. 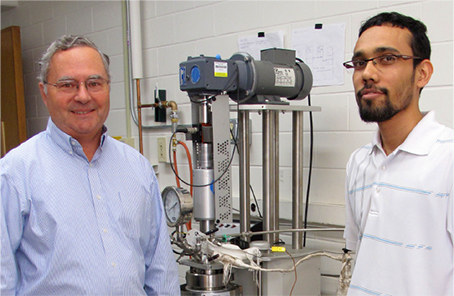 HMF can be used to make a wide range of chemicals, plastics and fuels. It is an appealing candidate for commercialization in part because there is already an established market for many of the products made with HMF. One is a fully plant-derived version of polyethylene terephthalate (PET), the common plastic used to make beverage bottles and other food packaging. For example, Coca-Cola, Danone, and BASF have already invested in the production of furandicarboxylic acid, an HMF-derived chemical used to make 100 percent bio-based plastic bottles.

To date, however, HMF’s use has been limited by its high production cost. Bio-based plastics are currently more expensive than their petroleum counterparts, largely due to the scale of the existing manufacturing processes.

“There is a demand for sustainable alternatives. The question is, how cost-competitive can we be with petroleum-based products?” says Motagamwala.

UW–Madison chemical and biological engineering Professor James A. Dumesic, senior author of the paper, has been working for more than two decades on technologies to sustainably and economically produce HMF from biomass-derived sugars.

“We have known for many years that HMF is a platform molecule with tremendous potential, but it has been an ongoing challenge to produce HMF in a cost-effective manner from sustainable carbohydrate resources,” Dumesic says. “Our early work focused on the use of special solvent systems to produce HMF from fructose with high yields.”

The problem has always been the solvent in which HMF has been produced.

“The solvents that are generally used are expensive themselves, and separation of the solvent and product makes the process even more expensive,” Motagamwala says. “Now we have shown that we can make HMF in really high yield — close to 95% — with an inexpensive solvent system that can be removed very easily.”

“There is a demand for sustainable alternatives. The question is, how cost-competitive can we be with petroleum-based products?” says Motagamwala.

The GLBRC team’s process dehydrates fructose to HMF using a solvent system composed of just acetone and water, with a stable solid acid catalyst. In addition to being cheap and readily accessible, the solvents are environmentally benign and easy to separate from the resulting HMF.

“One of the best things about the new process is that all the unit operations used are simple and are currently employed in the industry,” Motagamwala says. That means a lower capital investment and less risk than is generally associated with unproven technologies.

The researchers conducted a techno-economic assessment to evaluate the feasibility of deploying the new process. It shows that a minimum selling price for HMF of $1,710 per ton will achieve a 25% return on investment — a comfortable percentage intended to build in some reassurance of profitability.

The largest factor in determining that price is the cost of the feedstock — in this case, fructose. That means a company within the corn industry would already control the biggest cost in the system. It also means that when high fructose corn syrup supply is higher than demand, the industry could shunt excess fructose into HMF as a separate, high-value product stream.

The researchers also demonstrated how the process can be expanded to use glucose as a feedstock. Because glucose can be readily produced from biomass, it is cheaper and more abundant than fructose. However, HMF production from glucose requires an extra processing step and additional infrastructure.

Proving the technology using fructose is the first step, according to Motagamwala.

“The long-term implementation of the process is to get plants starting from glucose, which will drive the cost even lower,” he says.

The research was funded through a grant from the Department of Energy (DE-SC0018409).