In the heart of devastating outbreak, research team unlocks secrets of Ebola

In a comprehensive and complex molecular study of blood samples from Ebola patients in Sierra Leone, published today (Nov. 16, 2017) in Cell Host & Microbe, a scientific team led by the University of Wisconsin–Madison has identified signatures of Ebola virus disease that may aid in future treatment efforts.

Conducting a sweeping analysis of everything from enzymes to lipids to immune-system-associated molecules, the team — which includes researchers from Pacific Northwest National Laboratory (PNNL), Icahn School of Medicine at Mount Sinai, the University of Tokyo and the University of Sierra Leone — found 11 biomarkers that distinguish fatal infections from nonfatal ones and two that, when screened for early symptom onset, accurately predict which patients are likely to die. 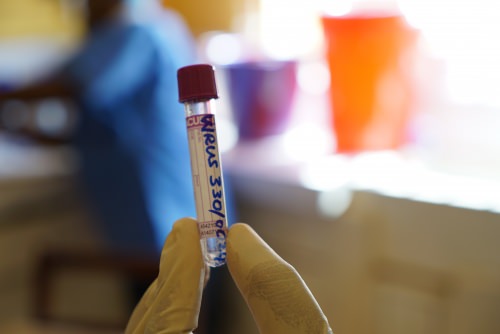 A vial is labeled and prepared to hold blood from an Ebola patient in Sierra Leone. All photos courtesy of Kawaoka Lab

With these results, says senior author Yoshihiro Kawaoka, a virology professor at the UW–Madison School of Veterinary Medicine, clinicians can prioritize the scarce treatment resources available and provide care to the sickest patients.

Studying Ebola in animal models is difficult; in humans, next to impossible. Yet, in Sierra Leone in 2014, a natural and devastating experiment played out. In September of that year, an Ebola outbreak like no other was beginning to surge in the West African nation. By December, as many as 400 Ebola cases would be reported there each week.

That fall, Kawaoka sought access to patient samples. He has spent a career trying to understand infectious diseases like Ebola — how do they make people sick, how do bodies respond to infection, how can public health officials stay at least a step ahead?

“Here, there is a major outbreak of Ebola. It is very rare for us to encounter that situation,” says Kawaoka, who is also a professor of virology at the University of Tokyo. 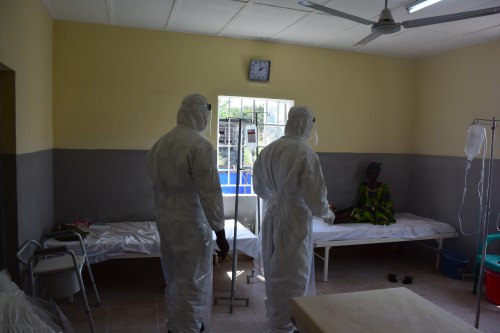 Health workers tend to a patient at one of Sierra Leone’s military hospitals, where many of the country’s 8,000 Ebola patients have received treatment since an outbreak began in West Africa in December 2013.

Yet blood samples were proving difficult to obtain and people continued to die.

Then, just weeks before Christmas, Kawaoka learned about a colleague in his very own department at UW–Madison, a research fellow from Sierra Leone named Alhaji N’jai, who was producing radio stories for people back home to help them protect themselves from Ebola. The pair forged a fortuitous partnership.

“He knows many people high up in the Sierra Leone government,” says Kawaoka. “He is very smart and very good at explaining things in lay terms.”

By Christmas, Kawaoka, N’jai and Peter Halfmann, a senior member of Kawaoka’s team, were in Sierra Leone.

“On the first trip, Alhaji took me to Parliament and we talked to a special advisor to the president, then the vice chancellor of the University of Sierra Leone,” says Kawaoka. “We got the support of the university, which helped us identify military hospitals and provided space. We went to the Ministry of Health and Sanitation and the chief medical officer and we explained what we hoped to do.” 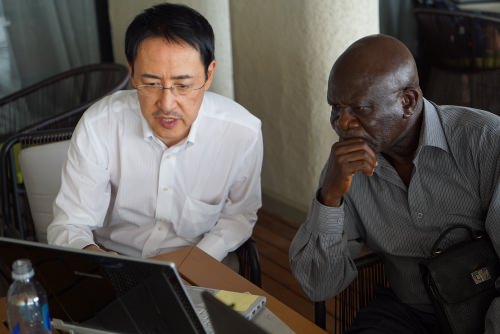 Kawaoka meets with Ekundayo Thompson, vice chancellor of the University of Sierra Leone, while in the African nation to establish a partnership to study and fight Ebola while improving the research capacity and infrastructure of the university.

By February of 2015, Kawaoka and other select senior researchers on his  team, including Amie Eisfeld, set up a lab in a military hospital responding to the outbreak in the capital city of Freetown (the researchers never entered patient wards). With the approval of patients and the government of Sierra Leone, health workers collected blood samples from patients after they were diagnosed with Ebola and at multiple points thereafter.

For comparison, the research team also obtained blood samples from 10 healthy volunteers with no exposure to Ebola virus.

“Our team studied thousands of molecular clues in each of these samples, sifting through extensive data on the activity of genes, proteins and other molecules to identify those of most interest,” says Katrina Waters, a biologist at PNNL and a corresponding author of the study. “This may be the most thorough analysis yet of blood samples of patients infected with the Ebola virus.”

The team found that survivors had higher levels of some immune-related molecules, and lower levels of others compared to those who died. Plasma cytokines, which are involved in immunity and stress response, were higher in the blood of people who perished. Fatal cases had unique metabolic responses compared to survivors, higher levels of virus, changes to plasma lipids involved in processes like blood coagulation, and more pronounced activation of some types of immune cells. 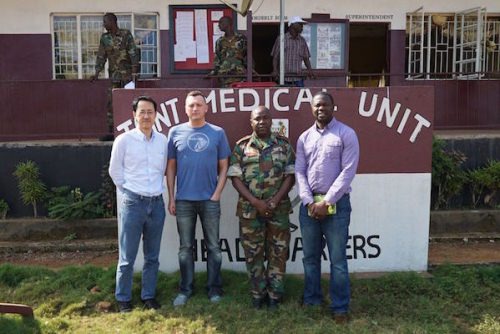 UW-Madison’s Yoshihiro Kawaoka, Peter Halfmann and Alhaji Njai stand outside of a military hospital with Foday Sahr, a Sierra Leone military official and chair of microbiology at the University of Sierra Leone.

Pancreatic enzymes also leaked into the blood of patients who died, suggesting that damage from these enzymes contributes to the tissue damage characteristic of fatal Ebola virus disease.

And, critically, the study showed that levels of two biomarkers, known as L-threonine (an amino acid) and vitamin D binding protein, may accurately predict which patients live and which die. Both were present at lower levels at the time of admission in the patients who ultimately perished.

“We want to understand why those two compounds are discriminating factors,” says Kawaoka. “We might be able to develop drugs.”

When Ebola virus leads to death, experts believe it is because of overwhelming viral replication. Symptoms of infection include severe hemorrhaging, vomiting and diarrhea, fever and more.

Kawaoka and his collaborators hope to better understand why there are differences in how patients’ bodies respond to infection, and why some people die while others live. The current study is part of a larger, multicenter effort funded by the National Institutes of Health.

“This may be the most thorough analysis yet of blood samples of patients infected with the Ebola virus.”

“The whole purpose is to study the responses of human and animal bodies to infection from influenza, Ebola, SARS and MERS, and to understand how they occur,” Kawaoka explains. “Among the various pathways, is there anything in common?”

In the current Ebola study, the team found that many of the molecular signals present in the blood of sick, infected patients overlap with sepsis, a condition in which the body — in response to infection by bacteria or other pathogens — mounts a damaging inflammatory reaction.

And the results contribute a wealth of information for other scientists aimed at studying Ebola, the study authors say.

Kawaoka says he is grateful to UW–Madison, University Health Services and Public Health Madison and Dane County for assistance, particularly with respect to his research team’s travel between Madison and Sierra Leone. Each provided protocols, monitoring, approval and other needed support during the course of the study.

“I hope another outbreak like this never occurs,” says Kawaoka. “But hopefully this rare opportunity to study Ebola virus in humans leads to fewer lives lost in the future.”

The study was funded by a Japanese Health and Labor Sciences Research Grant; by grants for Scientific Research on Innovative Areas from the Ministry of Education, Culture, Sports, Science and Technology of Japan; by Emerging/Re-emerging Infectious Diseases Project of Japan; and by an administrative supplement to grant U19AI106772, provided by the U.S. National Institute of Allergy and Infectious Diseases, part of the National Institutes of Health. Support was also provided by the Department of Scientific Computing at the Icahn School of Medicine at Mount Sinai and by a grant from the National Institute of General Medical Sciences (P41 BM013493). Some analyses were performed at the Environmental Molecular Sciences Laboratory, a national scientific user facility sponsored by the U.S. Department of Energy Office of Biological and Environmental Research.