A UW Law School alumnus from Green Bay with deep connections to the state will oversee the University of Wisconsin–Madison’s marketing, communications and strategic relationships, Chancellor Rebecca Blank announced today. 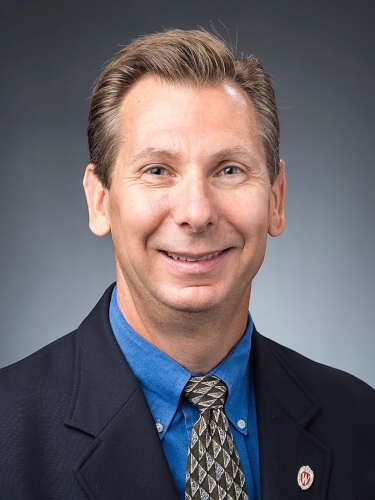 “Charlie is a Badger through and through, known to legislators, business leaders, alumni and donors in Madison and across our entire state,” says Blank. “No one is better positioned to expand our outreach efforts in the near future.”

“I’m honored to be able to continue serving in this role,” Hoslet says. “UW-Madison makes a major contribution to the fabric of our state in a variety of important areas, including education, health, economic development and quality of life. I will continue to strengthen our efforts to share the impact of the university with people around Wisconsin and beyond.”

University Relations manages a broad range of UW–Madison’s stakeholder relations, communications, and marketing and brand strategy, while also working closely with its schools and colleges and affiliated organizations. Its work is seen by parents, media, businesses, local, state and federal officials, along with the campus community itself.

Hoslet has a long history of leadership in the university. As associate and interim vice chancellor, he has overseen development of the university’s federal relations presence in Washington, D.C., the creation of the South Madison Partnership Office, and Chancellor Blank’s outreach trips around the state, among other initiatives.

“Charlie is a Badger through and through, known to legislators, business leaders, alumni and donors in Madison and across our entire state.”

From 2003–13, Hoslet founded and served as managing director of the Office of Corporate Relations. He joined the university in 1997 as director of state relations and from 1997–2003 was responsible for representing the institution before the Legislature, Governor’s Office and executive branch agencies.

Prior to his appointment at UW–Madison, Hoslet served as the executive assistant at the Wisconsin Department of Veterans Affairs, and began his career in the administration of Wisconsin Gov. Tommy Thompson, serving as both deputy legal counsel and chief legal counsel to the governor.

In addition to his university duties, Hoslet currently serves on the advisory board of Competitive Wisconsin Inc., and has served previously on advisory boards for University Research Park, the Center for International Business, Education and Research, and the Wisconsin Technology Council, among other organizations.

He received a law degree from UW–Madison in 1989 and a bachelor’s degree from Marquette University in Milwaukee.