Holder to give keynote at Wisconsin Law School Hooding Ceremony

Eighty-second U.S. Attorney General Eric H. Holder Jr. will be the speaker at the 2016 University of Wisconsin Law School Hooding Ceremony. The ceremony, which is open to law school students and their friends and families, will take place at 1 p.m. May 13 at the Monona Terrace Community and Convention Center Exhibition Hall, One John Nolen Drive. 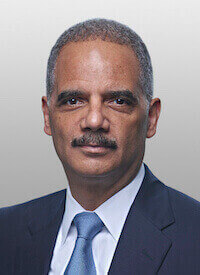 The Law School will provide a live stream of the ceremony. Check law.wisc.edu the day of the event for details.

Holder served as attorney general from February 2009 to April 2015. As the third-longest serving attorney general in U.S. history and the first African-American to hold that office, he is an internationally recognized leader across a broad range of regulatory enforcement, criminal justice and national security issues.

In 2014, Time magazine named Holder to its list of the 100 Most Influential People, noting that he had “worked tirelessly to ensure equal justice.” This past November, the NAACP Legal Defense and Education Fund named him as the recipient of its Thurgood Marshall Lifetime Achievement Award, recognizing his lifelong efforts to advance civil rights.

“Graduation is a special time for any student. As a law school graduate, I know all too well how much work goes into earning that degree,” Holder says. “I’m thrilled to have the opportunity to talk to these graduates about the road ahead, and I hope by sharing some of my own experiences, they see that it’s a big world just waiting for them to make a positive impact.”

The annual hooding celebration is a special recognition ceremony for students receiving law degrees. It is similar to a graduation ceremony in that faculty and students are dressed in academic regalia. Faculty members place the J.D. doctoral hood over the head of the graduate to signify his or her success in completing their law degree. In addition to the keynote, a faculty member, two J.D. graduates and one graduate law student (all chosen by the graduating class) will speak. The Law School ceremony is in addition to, and does not replace, the UW Commencement held at Camp Randall.

“I’m delighted that General Holder accepted our students’ invitation to address them at their Hooding Ceremony. We are honored to have someone with his background and varied experiences as our guest speaker,” Law School Dean Margaret Raymond says. “A law degree can lead to many extraordinary opportunities. General Holder’s career is a wonderful example of this; I’m certain he will be a great inspiration to our graduates.”

More information about the Hooding Ceremony