Each year, the Secretary of the Faculty recognizes four University of Wisconsin–Madison professors with the Hilldale Awards for distinguished contributions to teaching, research and service.

One scholar from each of four faculty divisions — Arts and Humanities, Social Sciences, Physical Sciences and Biological Sciences — is selected from nominations by department chairs. The awards have been given annually since 1987.

They will be honored at the April 2 Faculty Meeting and will receive a cash prize of $7,500. 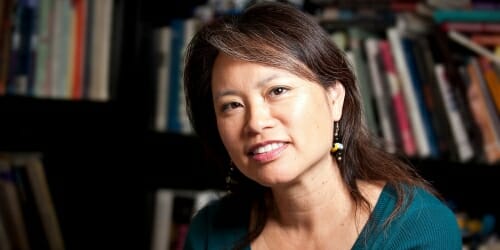 Leslie Bow “is a world-class scholar” with “a record of productivity and originality enriched by her passionate dedication to the University and to faculty and students of color across campus,” writes David Zimmerman, the Elizabeth Ritzmann Professor of English and Associate Chair of the English department, in his nominating letter.

She has two published books — and a third on the way — that analyze the intersection between race, gender and culture and that have earned Bow “a global reputation as a leading researcher and theorist” in fields ranging from literature to Asian American studies and gender and women’s studies, Zimmerman writes.

Bow, who joined the faculty in 2002, is also widely recognized as a compelling teacher, routinely winning awards given by students. “Professor Bow’s undergraduate classes are typically the first to fill in the English Department and always have a long waiting list,” according to her nominating letter. Her commitment to mentorship is also demonstrated through her serving on more than 20 dissertation committees and her “continuous advocacy” for her colleagues, as Associate Professor of History and Director of the Asian American Studies Program Cindy I-Fen Cheng notes.

As part of her advocacy for the Asian American Studies program and field, Bow has given dozens of campus lectures during her time at UW–Madison and her column on racial issues regularly runs in publications like the Milwaukee Journal Sentinel and the Denver Post. Bow gives frequent public talks on social issues to “student activist and community groups, the U.S. military, federal workers, Wisconsin teachers, and at museums and book festivals,” Zimmerman writes, “extending the educational mission outside the classroom.” 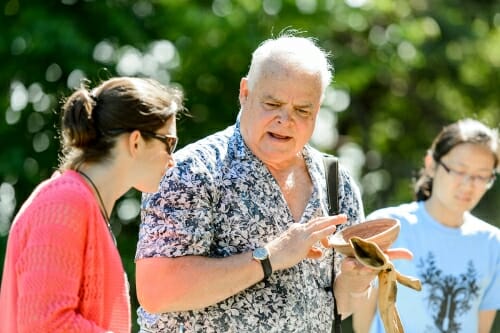 “Mark has been one of the most extraordinary faculty members in our department, with boundless energy and a really strong commitment to the department,” says Sissel Schroeder, Professor and Chair of Anthropology. Kenoyer is “widely regarded as the single most significant scholar working on the archaeology of the ancient Indus Civilization” of South Asia, Schroeder writes in her nominating letter, and has redefined our understanding of their civilization and the technology they developed.

A polyglot, Kenoyer is fluent in Bengali, Hindi and Urdu — and is learning several other languages, including Pashto — which Schroeder says deepens Kenoyer’s mastery of his field through the meaningful relationships he develops with collaborators in various countries. Those strong collaborations, and his intense curiosity, have led Kenoyer to expand his research program to Oman, China, Korea and Taiwan from its origins in Pakistan and India. In turn, Kenoyer has welcomed scholars from these and other countries to Madison to train and share expertise.

Kenoyer has distinguished himself with a facility for applying state-of-the-art analytical techniques, from electron microscopy to isotope analysis, to the materials he unearths. His discoveries of how materials were moved across the region and manufactured have demonstrated widespread trade between the Indus and other civilizations, transforming how people “think about ancient South Asia and its impact on the rest of the world,” according to his nomination letter.

He is a “tireless” mentor and “inspiring teacher,” Schroeder writes, who takes a keen interest in his students’ professional development and guides them in their research projects. His unique course on ancient technology involves students in research projects that routinely win prizes and develop into dissertations. Kenoyer has been instrumental in leading and supporting the Center for South Asia and the American Institute of Pakistan Studies, helping UW–Madison become a leader in South Asian studies. 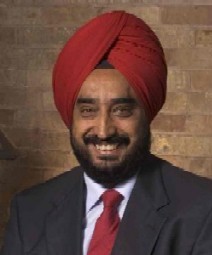 Gurindar (Guri) Sohi’s impact on the world can be felt in the palm of your hand — billions of computers, including smartphones, rely on his pioneering work in computer architecture and processor design. “Sohi has reached the pinnacle of his field,” writes Thomas Reps, the J. Barkley Rosser Professor & Rajiv and Ritu Batra Chair of Computer Sciences, in his nominating letter.

A faculty member at UW–Madison for more than 30 years, Sohi’s research into designing better computer processors has been noted for its creativity and longevity. Just two years after coming to UW–Madison, Sohi published an influential paper that has been cited by more than 150 U.S. patents. “It is a testimony to the beauty and elegance of the model that it continues” to influence processor design three decades after its proposal, Reps writes.

That influence continues to this day. Processor designs patented by the Wisconsin Alumni Research Foundation based on Sohi’s research have been used by Intel and Apple in their devices and the resulting revenue has helped support other researchers on campus. “Many faculty members and students across the university have already benefited from these funds for their research, and many others will benefit for generations to come,” according to his nominating letter. His support extends to sharing analysis tools developed in his lab with hundreds of researchers at universities worldwide, helping his colleagues make their own advances in the field.

Sohi’s record of mentorship is seen in the members of his lab that have gone on to found their own top research programs around the world. In 2006, while chair, Sohi founded the department’s Board of Visitors and the Silicon Valley Badgers network, now a model for connecting alumni. His work has been recognized by peers in his field with a series of top awards, including the ACM/IEEE Eckert Mauchly award for lifetime contributions in computer architecture, and election as an ACM Fellow, an IEEE Fellow and as a member of the National Academy of Engineering. Reps writes that “the impact of his work will continue to be felt for a very long time.” 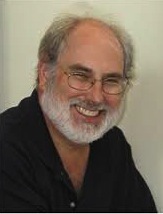 With more than 140 scientific publications to his name, Richard Gourse is a distinguished expert in bacterial gene regulation, where he has consistently contributed to new understandings about how cells respond to their environment. His record of achievement has been recognized with more than three decades of funding by the National Institutes of Health (NIH), which “further attests to the high quality of his research,” write Charles W. Kaspar, Professor and Chair of Bacteriology, and Jae-Hyuk Yu, Professor of Bacteriology, in their nominating letter.

Gourse’s research has uncovered previously unknown genetic elements guiding gene regulation in bacteria. He has proposed wholly new models of how genes are turned on or off in response to changes in the nutrients available to cells.

Gourse has served on numerous committees, including those charged with guiding the priorities of the NIH, and has been an editor for the Journal of Bacteriology for almost 30 years. He was instrumental in relocating a major meeting on bacterial genetics to the UW–Madison Memorial Union. And by coordinating the biennial Life Sciences Careers Day, Gourse helps more than 300 students and early career researchers explore and pursue rewarding work.

As chair from 2010 to 2015, Gourse steered the Department of Bacteriology through a challenging period. His “tireless efforts” to recruit the new members and secure attractive offers helped the department hire talented scientists, according to his nominating letter. Gourse’s recruitment efforts were matched by mentorship of current faculty, helping junior members navigate the tenure process and retaining faculty who were recruited by other institutions. Gourse “made the department stronger” as chair, Kaspar and Yu write.