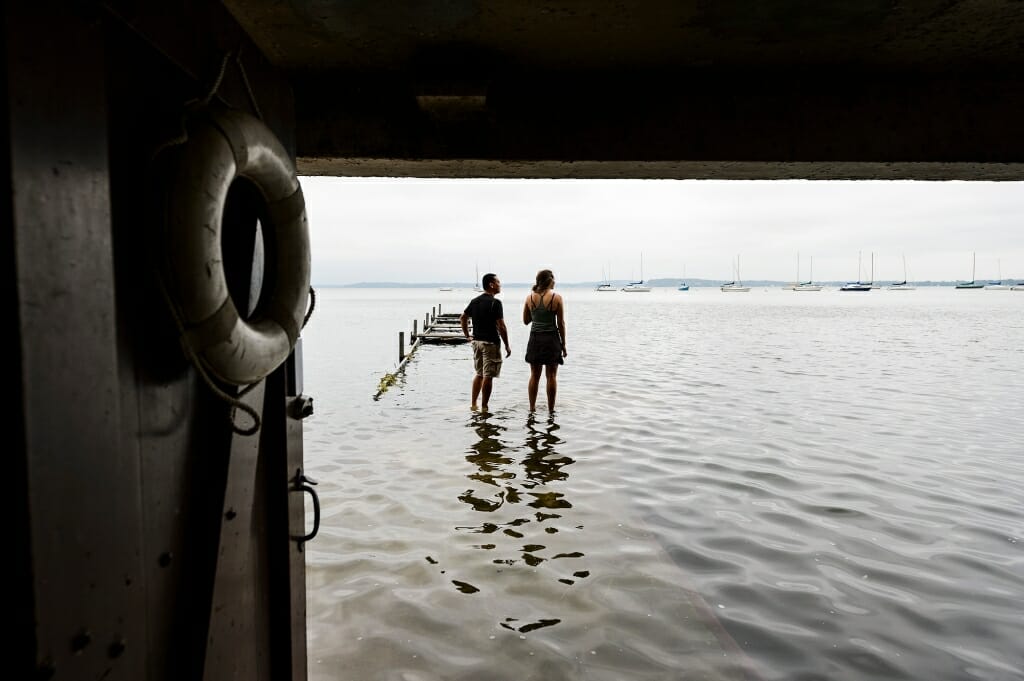 Standing on a concrete pier more than 6-inches under water, graduate student Daniel Haryanto and undergraduate Ella Norris look out to the horizon as rising Lake Mendota floods the boat dock underneath the Hasler Laboratories. Photo by: Jeff Miller 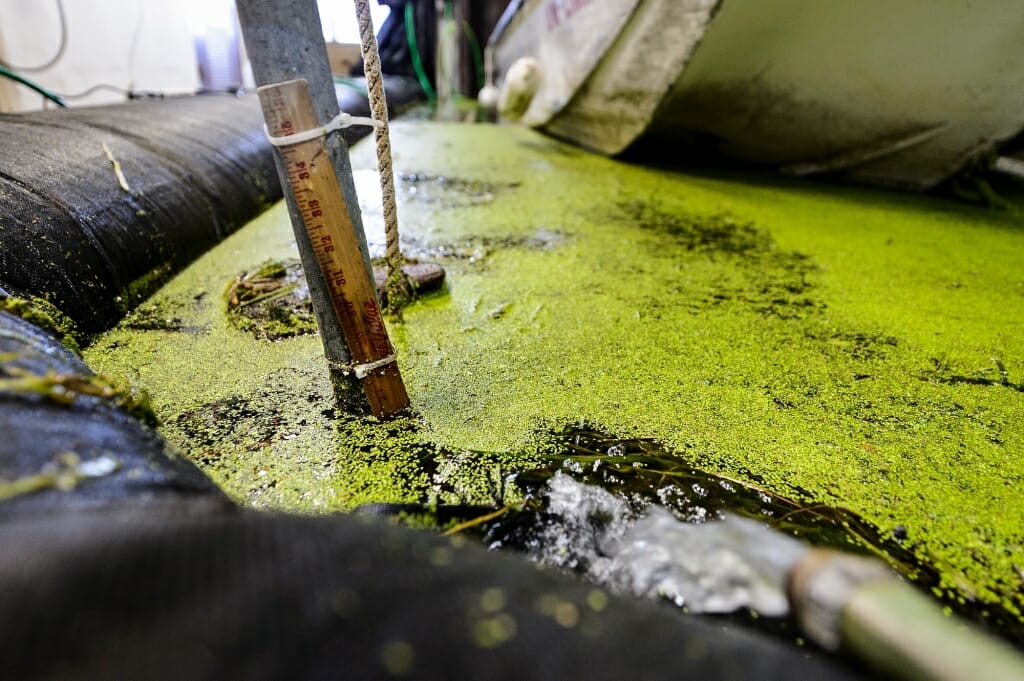 The boat dock underneath the Hasler Lab shows the effects of high lake levels. Photo by: Jeff Miller 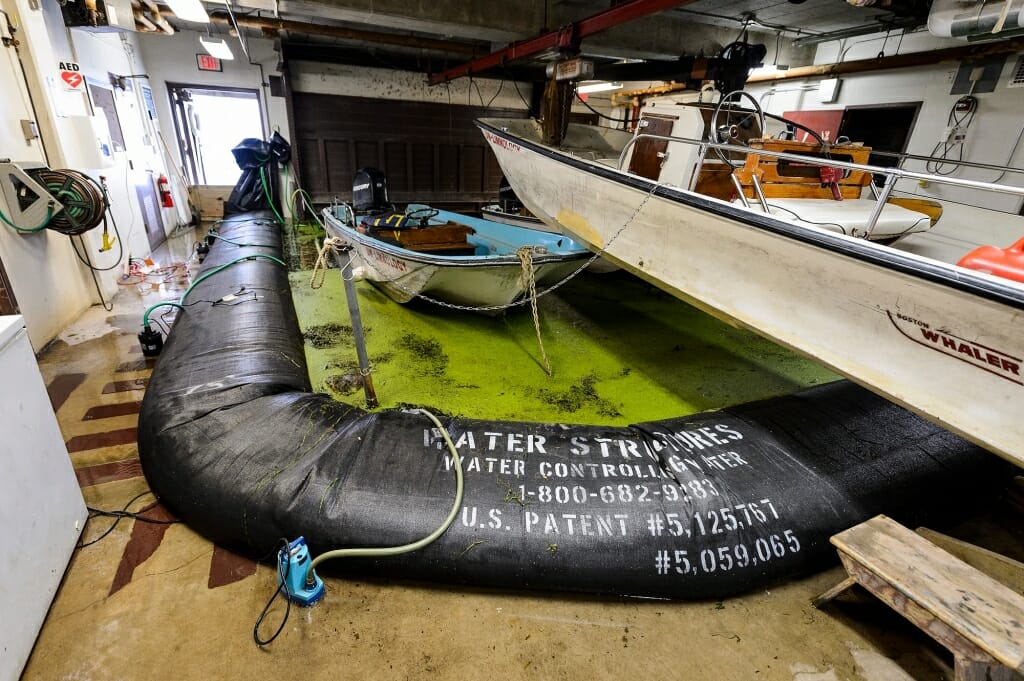 An inflatable dike, known as an Aqua Dam, holds back rising water at the boat dock under the Hasler Lab building. Photo by: Jeff Miller 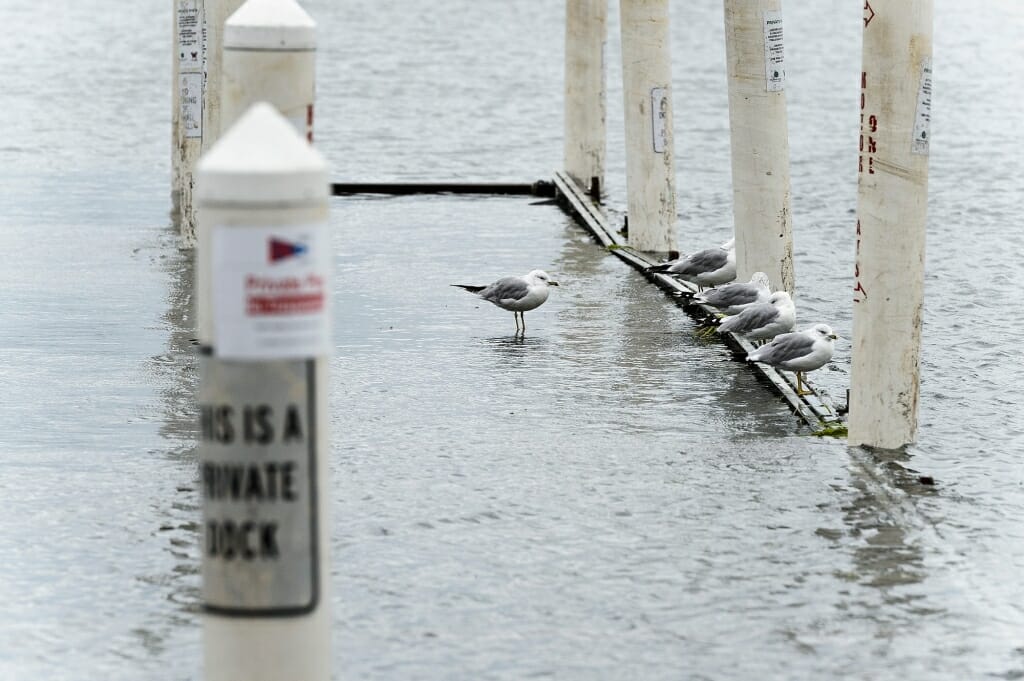 Seagulls perch on a closed section of pier for Hoofers' sailboats. Photo by: Jeff Miller 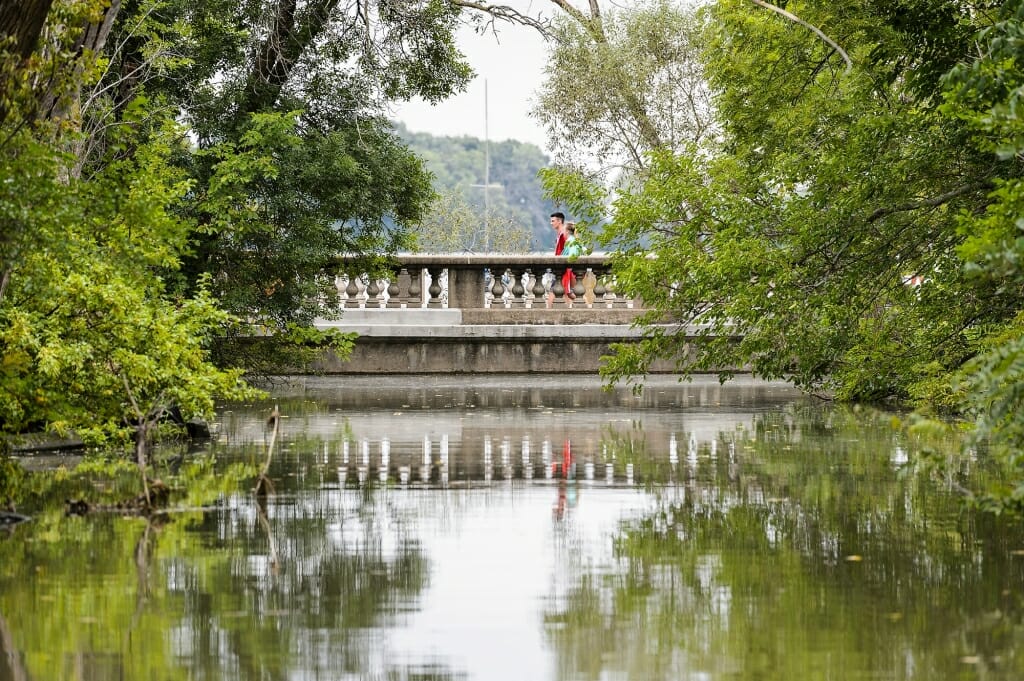 Pedestrians walk across a Willow Creek bridge that spans just above the swollen waters of Lake Mendota. Photo by: Jeff Miller 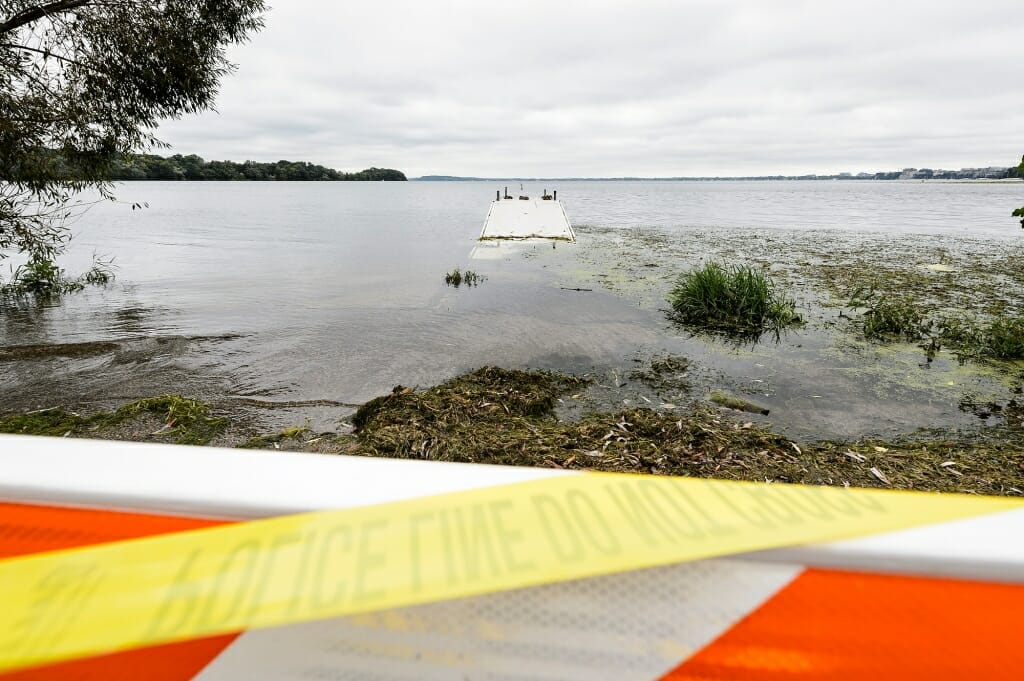 The boat launch at University Bay remains closed due to rising water. Photo by: Jeff Miller 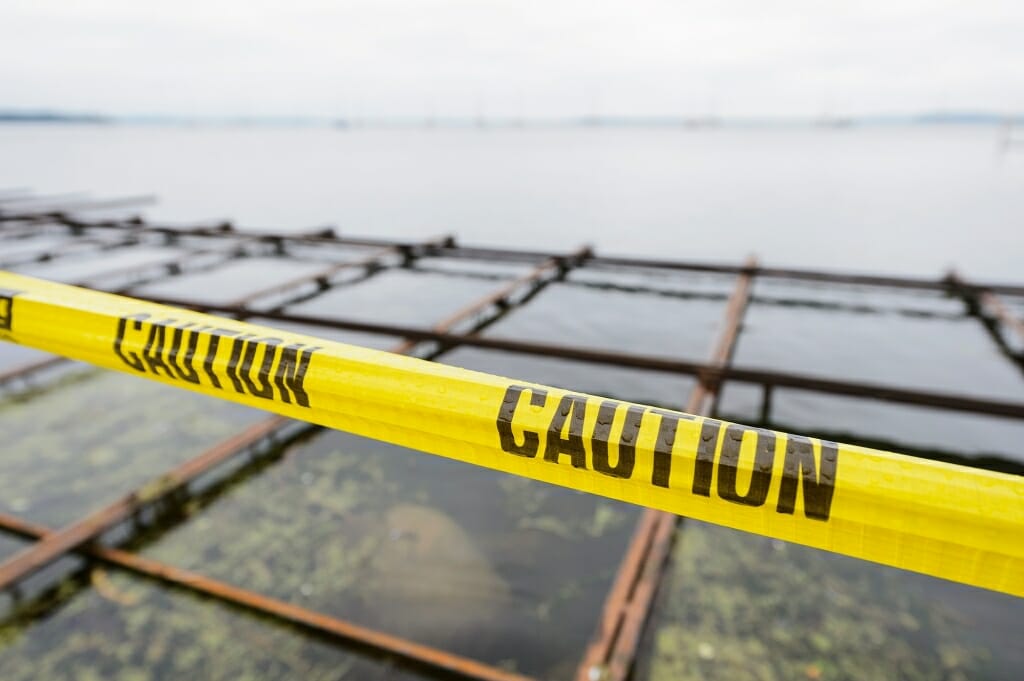 Historic amounts of rain fell on southern Wisconsin in a 24-hour period on Monday, August 20, 2018, especially in western Dane County. Heavy rains that broke state records quickly led to devastating flash flooding. And now, days after the rains, people across the county have worked hard to manage all the water that now remains.

Madison, a city between two lakes, is dealing with the consequences of a swollen watershed. On August 22, Lake Mendota crested at 852.3 feet above sea level. The summer maximum for Madison’s largest lake, whose shores harbor the University of Wisconsin–Madison campus, is 850.1 feet. The 100-year lake level for Mendota – a way of describing a lake height that has just a 1 percent chance of occurring, or is expected to happen just once in 100 years  – is 852.8 feet.

Shane Hubbard, a research scientist at the UW–Madison Space Science and Engineering Center, says that the recent flood event is similar to two others that occurred in 2000 and 2008, but these events are happening more frequently.

“While this has happened three times in 18 years, Mendota has only hit these levels these three times in the roughly 100 years of maintaining lake records,” he says. “The rainfall event, especially in the rainfall maximum, is very rare in both magnitude (10+ inches) and short duration (six-to-10 hours).”

Some parts of campus have felt the effects more than others, including the Center for Limnology, housed in Hasler Laboratories. Hasler sits atop the southern shore of Lake Mendota­. UW–Madison is considered the birthplace of limnology, the study of fresh water, and in recent days Hasler Lab has come up-close and personal with what is sometimes called the world’s most studied lake. Rising water levels in Mendota have forced Hasler to utilize an inflatable dike to keep flood waters from overtaking the building’s boat slip and affecting nearby research areas.

Other areas of campus, such as the parking lot at Picnic Point and other places along Lake Mendota and Willow Creek, continue to experience high waters. Hubbard urges people to avoid these areas.

“You should never wade through flood water,” he says, because it can be contaminated with unknown substances such as fertilizer, street and highway waste and animal waste. All can be harmful to human health.

Hubbard also cautions that the surfaces underneath flooded areas may no longer be structurally safe and can give way, holes of unknown depth may also exist under the water surface, and moving waters can also knock people off of their feet.

While Lake Mendota’s waters appear to be receding, more rain is expected over the next seven days, which Hubbard says could push the lake levels even higher.