Health care is for the police dogs of Wisconsin, too 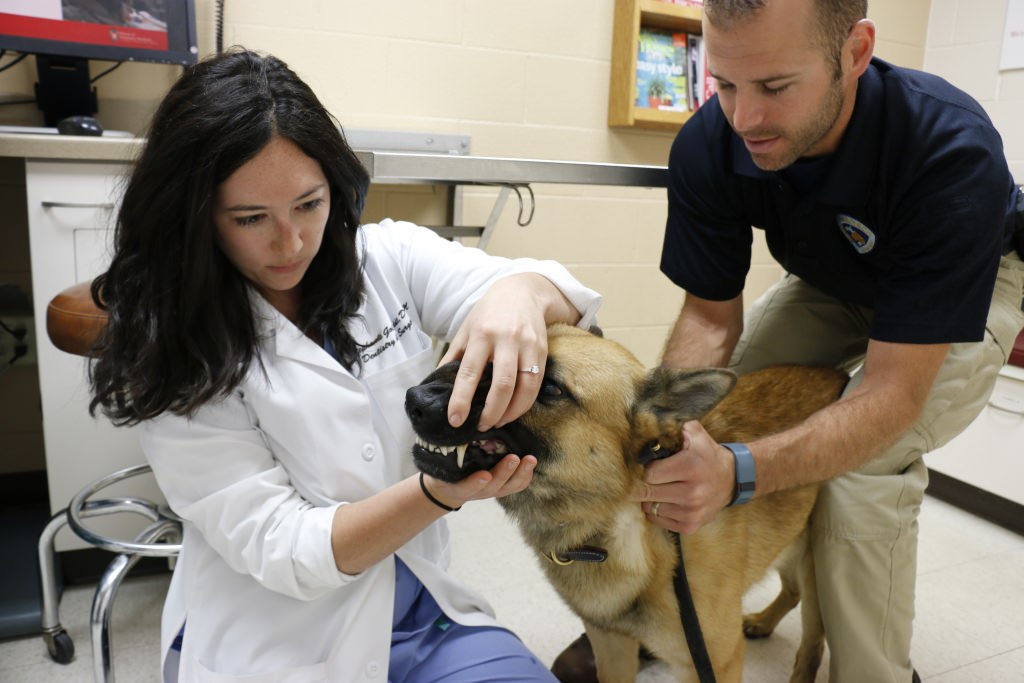 If you ask Deputy Jason Behm, he’ll tell you without hesitation that Harlow is the perfect partner.

“He’s the ideal blend of personality and – when it comes to work – intensity,” says Behm, a 16-year veteran of the Jefferson County Sheriff’s Office. And at the end of a long shift, Harlow likes a good scratch under his collar as a reward.

Harlow is a 5-year-old Belgian Malinois-German Shepherd mix, and he and Behm have been partners for more than three years. Like so many police dogs, Harlow’s contributions to law enforcement have been remarkable. But in late 2016, his career was in danger of an early end. Harlow began experiencing severe lethargy and extreme stiffness in his joints. After initial treatments at his local primary care clinic did not resolve Harlow’s health troubles, the K-9 was referred to the Small Animal Internal Medicine Service at UW Veterinary Care (UWVC).

In seeking help for Harlow, the Jefferson County Sheriff’s Office benefited from a new effort at the UW School of Veterinary Medicine (SVM) to make care even more accessible to K-9 units across Wisconsin.

A diagnosis and treatment 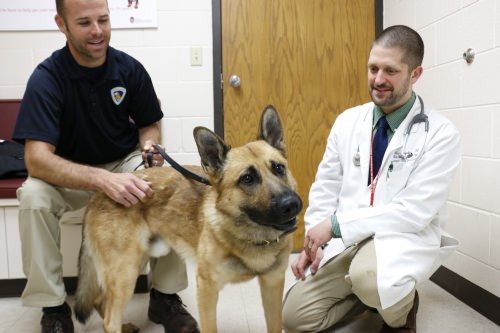 On duty or off, Harlow is an affection hound. When he trots into a room he makes the rounds, imploring everyone with his eyes for a scratch or a rub. And if that fails, he uses his muzzle, his tongue, his paws and so on. It’s clear Harlow thrives on interactions with people and he returns the favor by making a difference in peoples’ lives through his work.

A prime example: Last year, Behm and Harlow were dispatched to a missing person case, where a dog’s nose becomes invaluable. Harlow performed admirably, leading the search party through a forested county park where the remains of the missing person were recovered. Despite a somber outcome, the bereaved family was so grateful for Harlow’s help finding their loved one that they mailed a thank-you letter to the sheriff’s office shortly after the incident. That Christmas, they sent a donation to the K-9 unit.

But uncomfortable and fatigued, Harlow found it became increasingly difficult to perform his duties.

At UWVC in Madison – following an ultrasound, X-rays, and a series of blood and fluid tests by the clinical pathology team – clinical instructor Hattie Bortnowski and resident Allison Leuin ­confirmed that Harlow’s symptoms were caused by effusion, or swelling, in multiple joints. Analysis of fluid samples from his joints made them suspect immune-mediated polyarthropathy, a condition in which a dog’s immune system triggers an antibody response that causes arthritis in more than one joint.

Fortunately, the treatment they prescribed, a course of a common steroid called prednisone, has worked well to reduce the swelling.

“It helped us save his career,” says Behm. “He’s bounced back to a point where he seems better than he was as a puppy.”

UWVC has long provided care and other support for police dogs, but the new statewide K-9 health effort was created after the school looked for ways to do more to serve them and their departments. 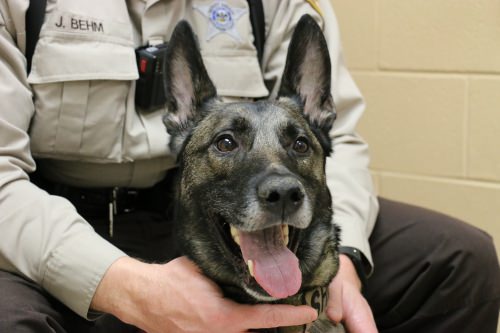 Police dog Harlow with Deputy Jason Behm of the Jefferson County Sheriff’s Office in an exam room at UW Veterinary Care, the teaching hospital at the UW School of Veterinary Medicine. Nik Hawkins

“In the past, students, employees and friends of the school have banded together to raise funds for protective vests for K-9s,” says Ruthanne Chun, associate dean for clinical affairs and director of UWVC. “But, to really recognize the crucial role police dogs play in law enforcement, we wanted to be a more intentional sponsor for them, and in a formal way.”

In late summer 2016, UWVC sent letters out to nearly 130 law enforcement agencies throughout the state to inform them of the new program. Those in Dane County – UWVC’s primary service area – were offered $5,000 in credit for veterinary services at regular rates and a 50 percent discount on any service beyond that for each calendar year. Agencies outside of Dane County were offered a 50 percent discount.

UWVC has built the credited services into its budget, and the SVM covers all discounted costs using gift funds. As of February 2017, 45 agencies have taken advantage of the offer by signing agreements with UWVC.

“It’s a tremendous help,” says Behm, whose K-9 unit has three dogs. “Without it, a more complicated health issue could break our budget.”

For the Madison Police Department (MPD), which raises funds for its eight-dog unit through a non-profit organization called Capital K9s, the discounted services go a long way. In addition to veterinary medical care and training for their dogs, the unit must fundraise for specially outfitted squad cars, computers, and other capital expenses. Any money they can save at the animal hospital can be redirected for these needs. 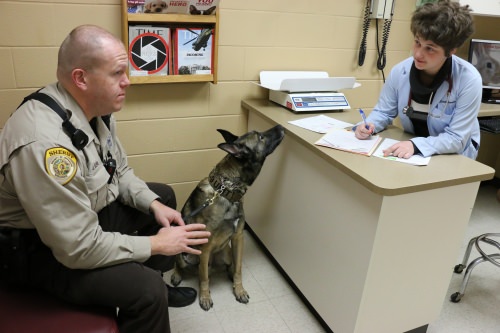 “In this environment, where money is so tight, every penny matters,” says Sgt. Jeff Felt, who supervises MPD’s K-9 Unit. “From the standpoint of the care the dogs receive, which is first priority, and from an expense standpoint, it’s been absolutely beneficial.”

Without the generosity of the SVM and other local veterinary clinics and the vendors who have donated food, the MPD K-9 Unit would not exist, Felt says. But the true beneficiaries are the communities the dogs serve.

Police K-9s take part in a wide range of police duties. They are perhaps best known for tracking and locating armed suspects and missing persons, but they also prevent potential confrontations with suspects by barking warnings to officers or simply by encouraging a surrender with their presence.

Police dogs also help law enforcement agencies improve their community engagement. Felt and the MPD K-9 Unit give more than 100 public demonstrations each year and the dogs help foster trust and dispel skepticism with their friendly nuzzles and palm licks.

“These are challenging times for law enforcement,” says Felt. “It’s amazing how the dogs have the ability to break down barriers. It’s quite powerful to make that connection.”

A large portion of the work done by K-9s is conducted behind the scenes. For example, prior to major events like concerts, athletic competitions, and visits from dignitaries, specially trained police dogs and their handlers sweep through venues, looking for bombs and other dangers.

“They make our jobs safer,” says Felt. “But more importantly, they truly help us keep the community as safe as possible.”

The UW School of Veterinary Medicine (SVM) has found other ways to support local K-9 units beyond credited and discounted services at UW Veterinary Care.

To help protect police dogs from stabbings and gunshot wounds – which comes with the territory in their line of duty – students, staff, faculty and friends of the SVM have pooled together donations to fund protective vests for five police dogs from the Adams County Sheriff’s Office, Madison Police Department and the University of Wisconsin–Madison Police Department. Many law enforcement agencies do not have the additional funds necessary to purchase canine body armor.

Other injuries are inevitable in a line of work as dangerous as law enforcement, and knowing how to perform basic first aid on a dog in the field could be a critical, K-9- life-saving skill for police officers and emergency medical technicians. So in February 2017, Jonathan Bach, clinical associate professor of emergency and critical care at the SVM, also volunteered his time to demonstrate basic first aid and triage techniques to the Dane County Sheriff’s Department after they reached out to him.

He walked deputies through the fundamentals of injury assessment and treatment, such as checking vital signs, recognizing bloating and heat stroke, and responding to more serious trauma, such as tourniquet application. For medics, Bach discussed airway management, administration of intravenous access (IV), chest compression techniques, the use of splints and backboards to secure long bone fractures, and wound treatment. He also covered ways to prevent heat exhaustion, proper dosages of anesthetics and how to use Narcan to combat an overdose in the event a drug-sniffing dog is exposed to an opioid.