He survived a heart transplant as a sophomore. Sunday, he’ll graduate. 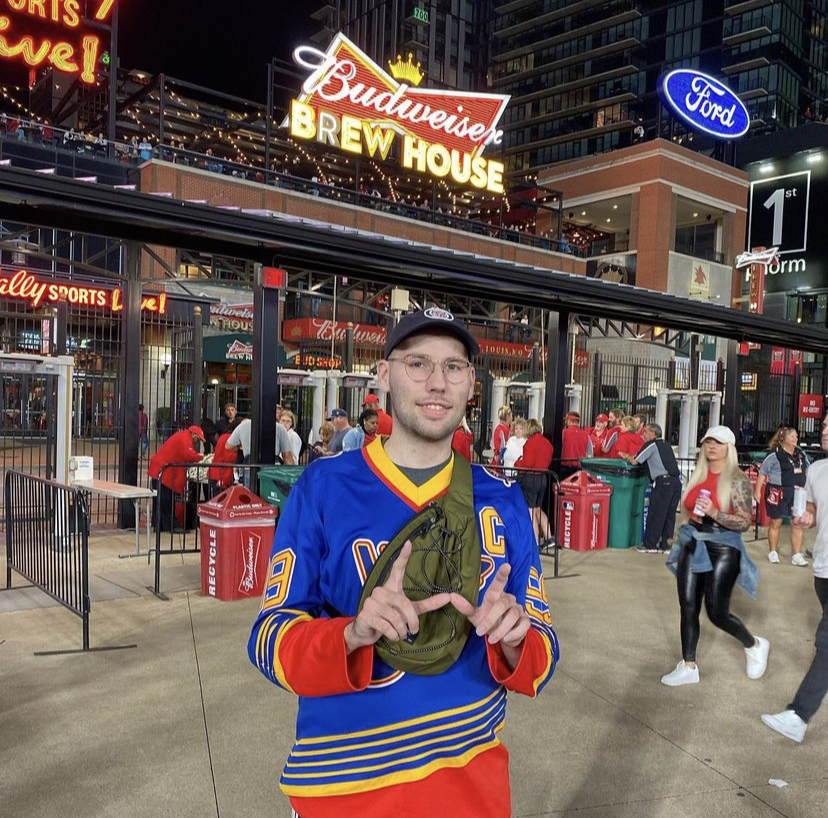 This past September, Anthony Genac attended a St. Louis Cardinals game at Busch Stadium, about 18 months after receiving a new heart. At the time of the surgery, he was 20 and a sophomore at UW–Madison. At winter commencement Dec. 18, he’ll earn his undergraduate degree. Submitted photo

It started with shortness of breath and difficulty climbing stairs. As the months went on, Anthony Genac began to realize something was seriously wrong with his body.

He was a sophomore at UW–Madison at the time. On a weekend trip to Stevens Point to visit a friend in March of 2021, he landed in the hospital, unable to eat and repeatedly vomiting. He thought it was his stomach. Tests showed an enlarged heart.

“I couldn’t breathe because my heart was pressing against my lungs,” says Genac, of Racine, Wis., who was transported by ambulance to the UW Transplant Center at University Hospital in Madison.

He learned he would need a heart transplant. Genac suggested to his doctors that the surgery be postponed until summer so that he could complete the spring semester. “I was told, ‘No, this needs to be done yesterday.’”

Within two weeks, at age 20, Genac had a new heart. 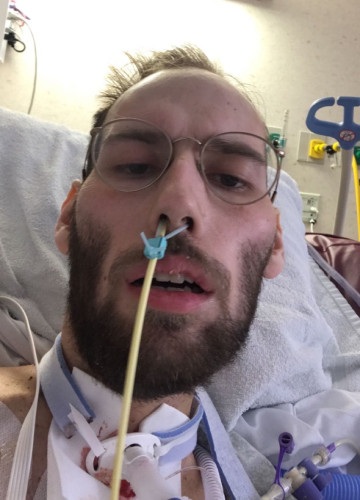 Anthony Genac says he went from weighing 185 pounds before his heart transplant surgery to around 135 pounds in this photo from his hospital bed. Submitted photo

“Sometimes it’s hard for me to believe what I went through,” he says. “I really try not to think about it too much.”

On Dec. 18, Genac will earn his undergraduate degree in personal finance from the School of Human Ecology, with an emphasis on financial planning. He intends to participate in winter commencement Sunday at the Kohl Center. “It’s going to seem surreal,” he says.

Remarkably, Genac completed his degree a semester early, in 3.5 years. After landing in the hospital, he immediately emailed his professors.

“They were all very supportive,” he says. “They put my classes on hold and told me I could finish them in the summer if I needed to.”

Instead, Genac found studying a welcome distraction during his months of hospitalization and rehab.

“Frankly, I was bored a lot,” he says. “There was nothing to do in the hospital. I was trapped in my own mind. Most of the time, it was me staring at the clock on the wall. So I would just start doing homework.”

It wasn’t easy. At times he could barely type. But he kept going. Summer Term courses also helped him graduate early.

“He has shown resilience while going through a difficult situation,” says Lepe, director of consumer finance and financial planning for the School of Human Ecology. “The fact that he kept up with his classes is extremely impressive to me. Additionally, his involvement in the program as an undergraduate grader for some of our courses and as a peer educator in our Badger$ense Financial Life Skills program makes his college experience all the more remarkable.”

Genac was one of 3,817 patients in the U.S. in 2021 to receive a heart transplant, a number that set a new annual record, according to the U.S. Department of Health and Human Services. Genac says he feels particularly fortunate to still be alive because he suffered a stroke and other complications following his surgery.

“I basically almost died four times after the transplant,” he says.

Genac says he feels immense gratitude for the anonymous donor whose heart now pumps in his chest. He credits dozens of doctors, nurses and medical professionals for saving his life. Genac also wants to give a special shout-out to his mom, Sue.

“She was there every day with me,” he says. “She lived in a camper in DeForest for two months and went into early retirement to be there for me.”

During his time at UW–Madison, Genac was involved in the Wealth Management Group and the Wisconsin Federal Reserve Challenge, serving in leadership positions for both student groups. Post-graduation, Genac has accepted a position with Advanced Asset Management in Grandville, Michigan. He interned with the company this past summer.

“Overall, I think I’m doing pretty well,” he says. “I’m feeling good mentally. Physically, I’m still pretty weak, but I’m working on that. If I eat healthy and keep taking my medications, I think modern medicine has given me a chance at a decent lifespan.”