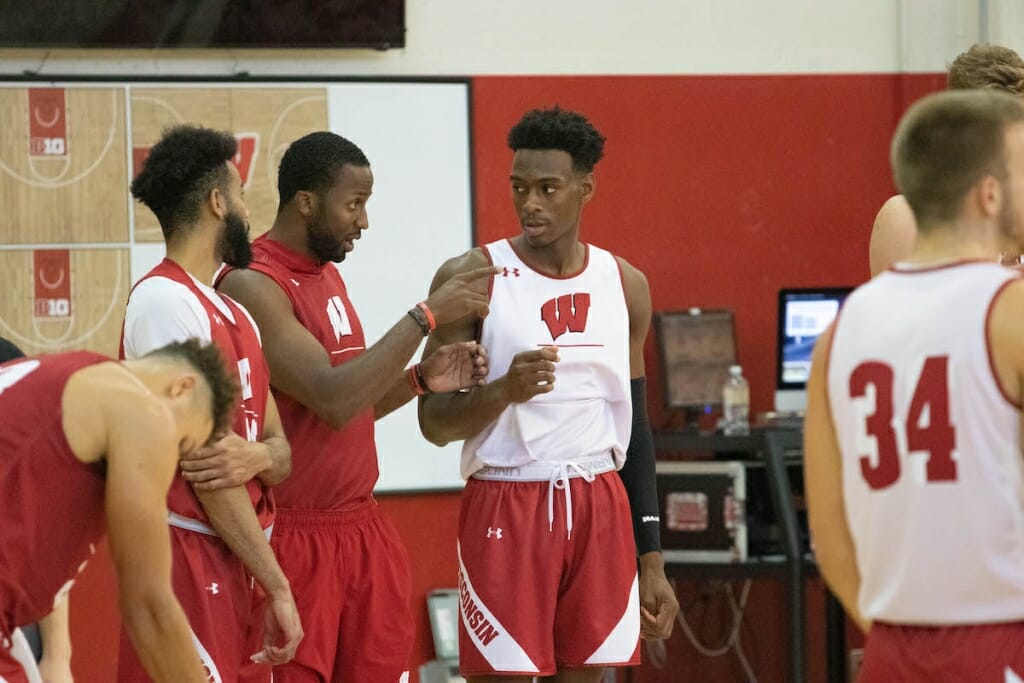 Samad Qawi, in white, is shown at the men’s basketball team practice. As a senior, Qawi made the team in a tryout. Photo courtesy of UW Athletics

At the beginning of his senior year, the last place Samad Qawi would have expected to be on an October night is basketball practice with the Badgers.

Qawi, a kinesiology major and pre-med student from Racine, joins the team this year as a walk-on after standing out at an open tryout. He credits “blood, sweat, and tears” with making his basketball dream a reality, capping a UW–Madison career where he’s already achieved much academically and as a student leader.

He started playing basketball when he was 8 at his local YMCA and instantly loved the game.  He was a promising player on junior varsity as a freshman and sophomore at Horlick High School in Racine and was excited about moving to varsity as a junior.

Just as quickly as his varsity career began, so did his struggle with injuries. 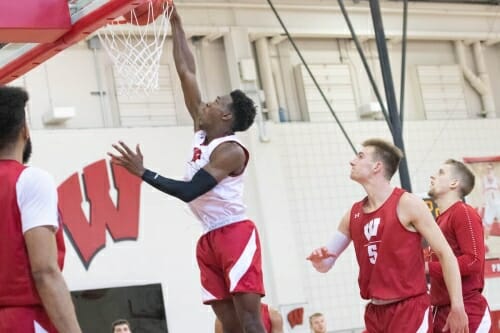 In his first game, he said, “I blocked the other team’s player from a layup, and when I landed, it felt like my knee had exploded and I passed out from the pain.”

Qawi had torn ligaments and his meniscus in addition to chipping his knee cap. He was out for the year, which was devastating.

With determination, he was able to get back on the court for his senior year. He had grown taller – he’s now 6-foot-6 – and had a good vertical jump. Unfortunately, hehurt his leg and his back in the second game of the season. A pinched sciatic nerve limited his playing time to 20 minutes per game.

Though the doctor and his trainer both recommended he not play the rest of the season, Samad wasn’t ready to give up. In the playoffs, he landed awkwardly after a jump and had to be carried off the court because of his leg. That ended his high school basketball career.

While that was disappointing, Qawi was achieving much in the classroom.

As a high school freshman, he became involved in UW–Madison’s PEOPLE program, which helps promising under-represented and first-generation college students prepare for college and complete their degrees. He took a neurology class at UW–Madison and it changed his life.

“It was just like that,” Qawi told the Racine Journal Times in 2016. “I was always interested in nerves and the brain and that class made it even better. I learned even more about the body.”

He focused on more science and math and finished in the top 10 percent of his high school class. He started at UW–Madison in 2016 as a PEOPLE scholar.

At UW–Madison, he became an intern at the UW Health Clinical Simulation Program, which gives patient care simulation training to health sciences students and professionals.

He also recently became the president of the Wisconsin Association of Black Men, a student organization that promotes social justice.

He still dreamed of playing with the Badgers basketball team. After tearing his ACL during a recreational game freshman year, he started to train in a different way.

“Sophomore year I dedicated my exercise purely to weight lifting… because I just didn’t want to be injured anymore,” Qawi said.

He was able to ease back onto the court junior year and at the start of senior year, which is when the news of the open tryout came.

“I’ve been training for the last two years so I knew I was physically able to do it. With blood, sweat, tears, and a lot of hard work, I was able to will myself on to this team,” he said.

The transition has been made easier because everyone on the team and coaching staff has been very welcoming, he said, adding that he is grateful to be part of a family like this.

After graduation, Qawi is interested in continuing to play basketball, possibly overseas or in the NBA G League, before going to medical school. Ultimately, he wants to specialize in sports medicine.

“The goal is to be able to spread knowledge about injuries to younger athletes because in middle school and high school we don’t know how to take care of our bodies as we grow,” he said.

He also wants to start a community center in Racine that gives young athletes an opportunity to train when they wouldn’t otherwise be able to afford it.

Qawi and his fellow Badgers will play at noon Sunday at the Kohl Center in the team’s Red/White Scrimmage. 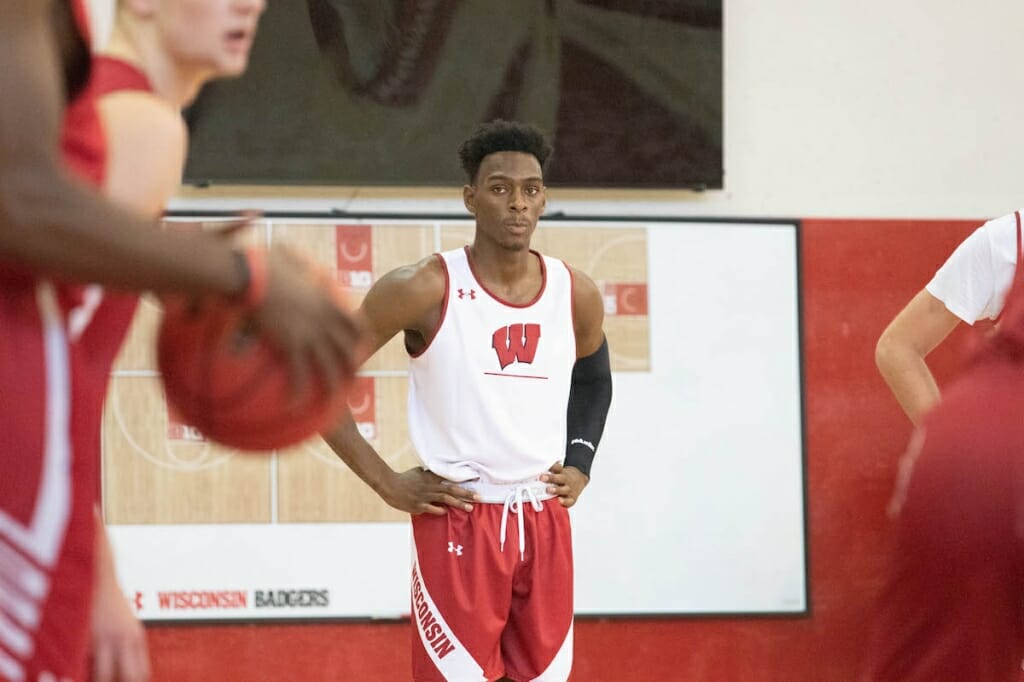