Hard as a rock? Maybe not, say bacteria that help form soil 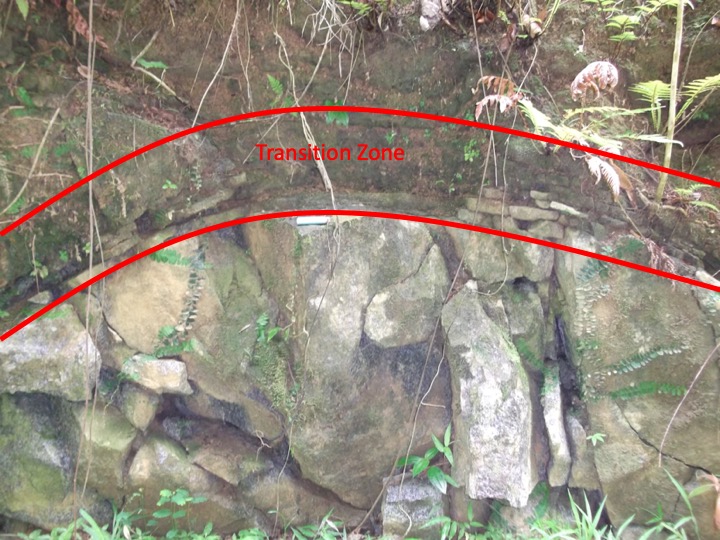 This transition, from solid bedrock to pulverized rock in subsoil, probably occurs on land around the globe. A new study from UW–Madison scientists shows bacteria’s critical role at the beginning of soil formation. Image courtesy of Stephanie Napieralski

Research published this week by University of Wisconsin–Madison scientists shows how bacteria can degrade solid bedrock, jump-starting a long process of alteration that creates the mineral portion of soil.

Soil, which the aphorism describes as “that thin layer on the planet that stands between us and starvation,” is a complex mishmash of minerals and organics.

The problem is this, says senior author Eric Roden, a professor of geoscience at UW–Madison: “The general picture of soil shows solid bedrock a few meters below the surface, then a fractured, crumbly layer popularly called ‘subsoil.’ At the top is the rich, biologically active layer called soil. Chemical analysis links the minerals in soil to bedrock, but how does this extreme transformation take place?”

Oxygen and compounds from plant roots can degrade rock near the surface, but bedrock starts to degrade deep beneath the roots. Until now, no one has shown the key role of biology in speeding the decomposition of solid rock into smaller mineral bits.

These bits, containing basic plant nutrients such as phosphorus and potassium, are critical to soil’s ability to support plants — and life in the terrestrial biosphere.

In the Proceedings of the National Academy of Sciences this week (Dec. 16, 2019), Roden and colleagues found that microbes cause oxidation and “weathering” in a common type of bedrock.

“We know that chemical and physical processes start to crack bedrock,” says Roden, “but those processes are not enough to make the minerals that become soil. Once the bedrock cracks sufficiently, microbes enter the cracks and take over. The result, according to our work, is a rapid biological acceleration of weathering.”

Scientists have wondered for decades whether and how microorganisms could engage in the initial breakdown, but only now have they explained the essential trick that bacteria use to “eat” the upper surface of bedrock, says Roden.

The process revolves around oxidation, familiar as the cause of rust in iron. Oxidation moves electrons, which supply energy to the bacteria, says Roden. “What we’ve developed is a picture of how bacteria slowly ‘munch’ rocks to extract energy without taking the minerals into their cells.”

In general, microbes ingest their “food” into their cells before they “eat” it, but they cannot ingest intact rock. So the diverse group of bacteria that Roden’s group identified in the lab use proteins on their outer surface to move the electrons.

For her PhD research, first author Stephanie Napieralski drilled about eight meters to bedrock in the Luquillo Critical Zone Observatory in Puerto Rico. Returning to Madison, she ground up samples of a rock called diorite, which contains ferrous iron. Grinding was intended to accelerate the slow biochemical reactions she was hoping to see, and speed the pace from geological to academic. Then she inoculated the samples with material from the drill hole, which carried a natural stew of bacteria. She used a sterile fluid for her comparison samples.

These microscope images compare sterile rock (left) with rock incubated in a fluid containing bacteria extracted from the Puerto Rico site. “In every nook and cranny, in every cracked rock, where there is ferrosilicate mineral, there is probably a microbe sitting on there, trying get energy,” says senior author Eric Roden. The outcome seems to affect all who eat. Images courtesy of Stephanie Napieralski

After about two-and-a-half years in the dark, at room temperature, electron micrographs showed a radical change in surface texture — but only if bacteria were present. “The rate of oxidation, weathering, was slow, but without the bacteria, it was zero,” says Napieralski. “Although there is some chemical weathering in the critical zone, it was so slow that we did not see it during the experiment.”

“In my opinion, this type of metabolism has been going on basically forever, but unknown to us,” says Roden. “This discovery opens up a whole other way of thinking about the oxidative weathering of ferrous silicate rock. We have danced around this for years. Rocks were dissolving, and microbes were involved. I kept saying, ‘What about the microbial oxidation of rock?’ and my colleagues said, ‘Show me.’”

Locating electron-transferring proteins on the cell membrane makes sense, says Napieralski. “This biological invention — this protein — allows cells to make electrical contact with minerals. It allows them to weaken and eat rock. If they did bring the iron inside the cells and cause it to oxidize, they would be full of rust.”

Because the experiment relied on pulverized rock, it does not say how fast the degradation occurs in nature. However, Napieralski measured production of ATP, an energy-processing molecule, proving that the microorganisms were alive and working during the 30-month incubation.

The iron-oxidizing bacteria revealed in the study occupy a range of bacterial phyla, “meaning they are as different as zebras and frogs,” Roden says.

Although the study focused on the dark, stable temperatures found at the top of bedrock, iron-oxidizing bacteria may also play a role in weathering higher up in the soil, Napieralski says. “External electron transfer is a way to cope with the difficulty of eating iron. One big thing in the paper is demonstrating that the organisms grew and coupled the oxidation of iron to the generation of ATP, the ‘energy molecule’ in all known types of life.”

A full understanding of life requires an accounting of energy, Roden says. “What we have found is that the cells make direct contact with an otherwise insoluble mineral, and they pull electrons from the mineral. They are getting energy from eating rock and along the way supplying nutrients for plants — for life on Earth.”

This work was supported by the NASA Astrobiology Institute, a University of Wisconsin Microbiome Initiative award, and Luquillo Critical Zone Observatory (NSF EAR-0722476 and EAR-1331841).