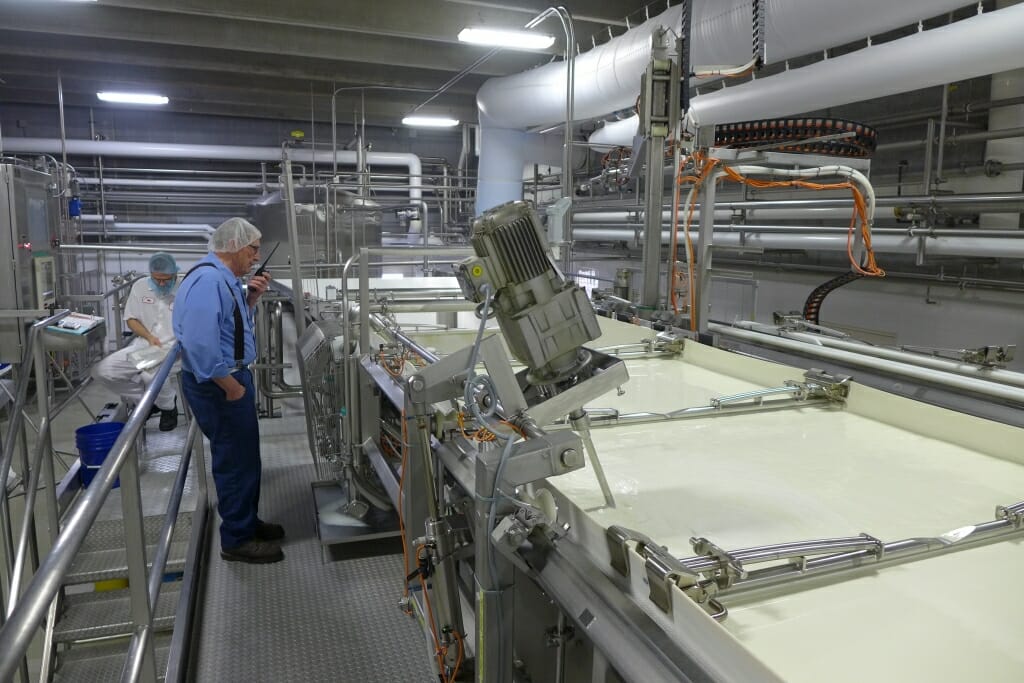 Klondike’s largest seller is feta, made in the automated production line. On left, milk pumped into the far vat cells will shuttle along until it is cut into chunks and drained off in the forms shown at right. Photo by David Tenenbaum

MONROE, Wisconsin — Klondike Cheese Co. is expanding production as it enters its second century of cheesemaking, under the leadership of six Master Cheesemakers certified by UW–Madison’s Center for Dairy Research.

The increased volume will still require hand labor in the packaging area, and Buholzer expects no reduction in total employment, which is now above 230.

The new line will triple output of brick, muenster and havarti cheese, which are now mainly sold under customers’ labels. Klondike already runs an automated production line for feta, its major product, which it markets under its own label, Odyssey. 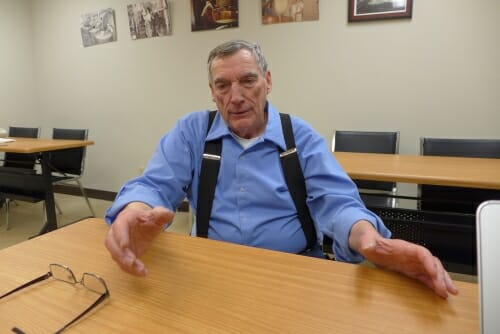 Ron Buholzer, president of Klondike Cheese Company, is one of six at the Monroe-area firm with a master cheesemaker certification from the UW–Madison Center for Dairy Research. “I’d been making cheese for a long time when I got into the master program, but it was amazing how much I learned. If you look at the success that Wisconsin cheese companies have in the big competitions, I do believe this master program has contributed heavy duty.” Photo by David Tenenbaum

The Buholzers, like many in Green County, trace their roots to Swiss immigrants, specifically three brothers who settled in the area in the 1910s and almost immediately set to work making cheese. The third- and fourth-generation of the Buholzer family now operate a 240,000-square-foot plant along Wisconsin Highway 81 between Monroe and Argyle.

In recent years, cheesemakers in “America’s Dairyland” have broadened from commodity cheeses like cheddar, Colby, mozzarella and Swiss to gourmet and niche cheeses.

That change has affected Klondike.  “In the 1980s, we were making Colby and cheddar, but the margins were getting to be horrible, and we went looking for something else,” says Buholzer. “Dan Carter, our marketing chief, said why not look at feta, and I said, what in the hell is feta? So we went to Chicago and bought a pail to analyze its composition, and started some test batches.”

To judge the new feta, Klondike consulted an Armenian couple who owned a restaurant in Monroe.

Automation is becoming a fact of life in large cheese operations. When Klondike started, the family lived above the factory. “I began in grade school doing Saturday chores, sweeping the cellar,” says Buholzer. Before class in junior high, he hauled a load of canned milk. “Back in those days, if you wanted spending money, you worked.”

Changes in demographics and interests have propelled the move toward automation, says Buholzer. “Typically, there were large farm families around here, and the kids grew up having to work. Now, families are smaller. Farms are closing. Kids have activities after school, and so it’s more difficult for us to find help.”

But if help is hard to find, expertise is close at hand. Less than an hour up the highway, the UW–Madison Center for Dairy Research is a world-renowned institute concerned with all aspects of dairy products, most emphatically including cheese. CDR is almost entirely funded by state dairy farmers. 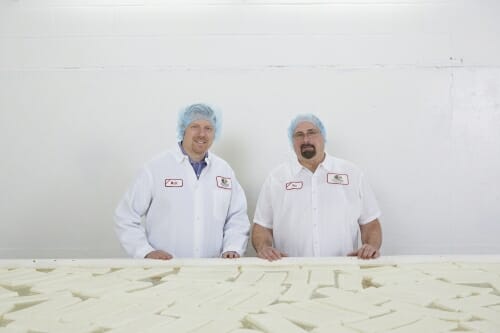 In 1994 CDR, in conjunction with the Wisconsin Milk Marketing Board (now called Dairy Farmers of Wisconsin), opened the Master Cheesemaker’s Program as a way to broaden and deepen expertise in the state’s signature product.

The growing complexity of cheesemaking technology, food-safety regulations and consumer preferences all contribute to the need for greater expertise, says Buholzer. “Plants have changed; they have become huge. In the day when I took over from my dad, you did everything, you knew about everything. You can’t know that much anymore.”

The Master program is only open to Wisconsin cheesemakers with 10 years of experience, including five in the one or two varieties that will be their focus. “The program requires a plant visit, when we go from start to finish through the cheesemaking process,” says Marianne Smukowski, program coordinator. “The candidate must also pass an oral exam with a board member present.”

Even experienced cheesemakers quickly realize how much they have to learn during the cheese technology short-course, says Joanne Gauthier, the program’s administrative coordinator. “They tend to say ‘Things have certainly changed. There’s so much new information.’ Or ‘Oh my gosh, I understand now why cheese works as it does.’  There is not another program like this in the United States.”

Each year, seven to 10 people enter the program, which typically takes close to three years to complete.

Klondike’s commitment to the master program is obvious. Like their brother Ron, David and Steve Buholzer attained the master certification years ago. More recently, Steve’s son Adam was certified, and this spring, Matt Erdley (Steve’s son-in-law) and Ron Bechtolt brought the company’s total to six – possibly a record for state cheesemakers.

As a measure of the quality of Klondike’s cheese, the company took home 12 awards, including seven first place ribbons, at the American Cheese Society’s annual competition recently in Pittsburgh.

“UW-Madison and the CDR [Center for Dairy Research] have been instrumental to us, because they offer classes in cheesemaking and the science behind it,” says Erdley. “They helped in the initial phases of our yogurt plant, and we have used CDR many times over the years, not only to solve problems, but also to work out concepts. It’s a great relationship that will continue for years to come.” 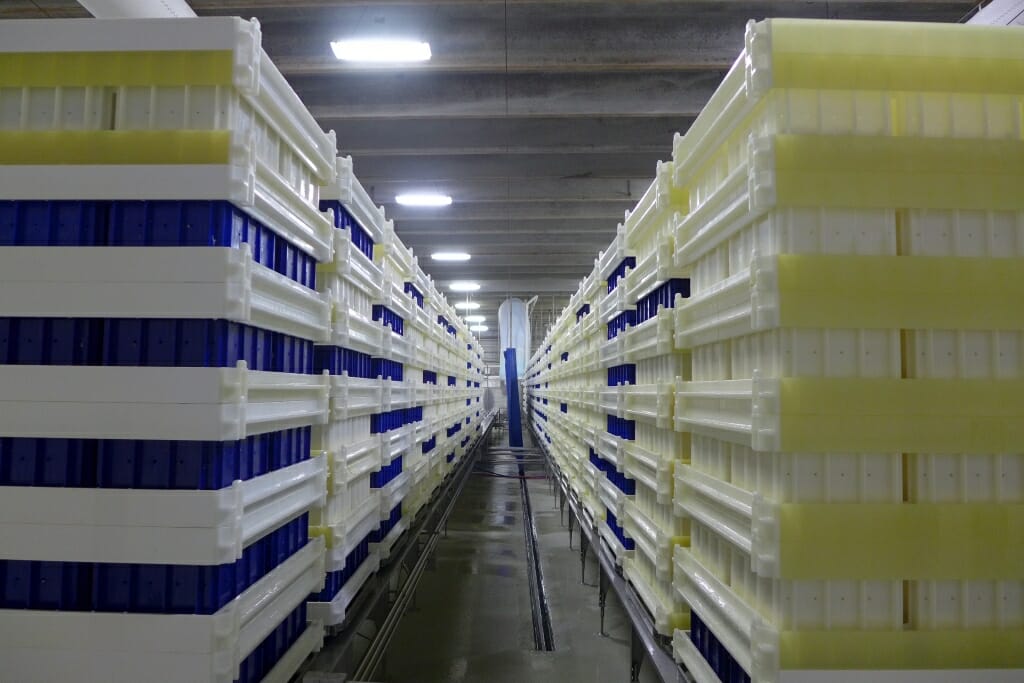 Feta cheese is dried in forms. Photo by David Tenenbaum