Lager beer is cold, crisp, dry — and worth about half a trillion dollars worldwide.

Behind the world’s most popular alcoholic beverage is a yeast adapted to the cold, and hungry for the sugars it will transform into bubbles and booze.

That yeast is a hybrid, an amalgamation of the domesticated baker’s yeast Saccharomyces cerevisiae and a recently discovered wild species, Saccharomyces eubayanus. Hundreds of years ago, the two species combined their strengths into a cold-fermenting strain that readily produces the crisp, light taste that came to dominate the beer market in the centuries that followed.

In a pair of new papers, University of Wisconsin–Madison Professor of Genetics Chris Todd Hittinger, his graduate student EmilyClare Baker and others show how modern lager yeast adopted the cold-loving and sugar-hungry traits essential to their success. 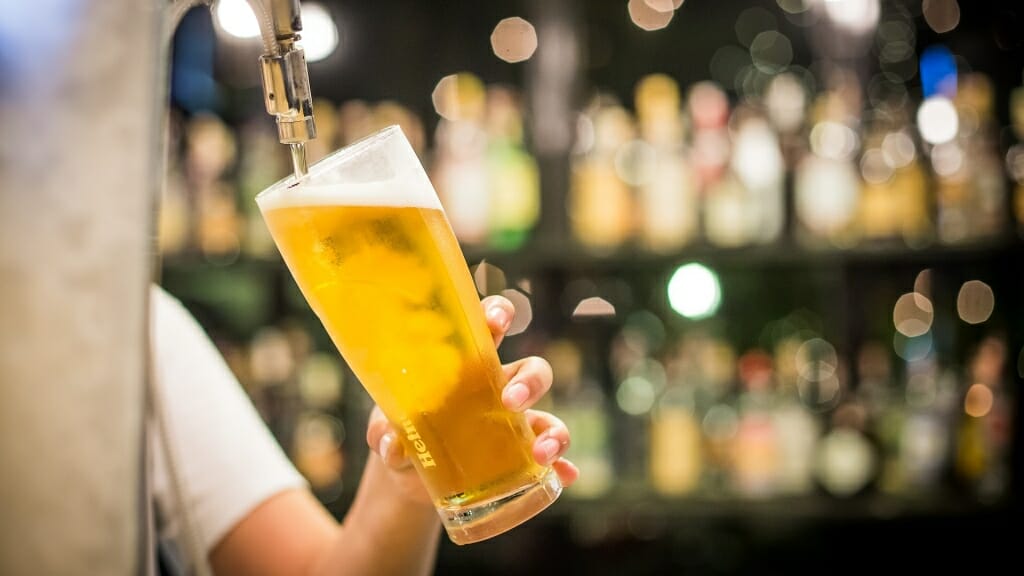 Lager beer is cold, crisp, dry — and worth about half a trillion dollars worldwide. Behind the world’s most popular alcoholic beverage is a yeast adapted to the cold, and hungry for the sugars it will transform into bubbles and booze. Pixabay

In one paper, to be published Feb. 1 in Science Advances, the team demonstrates that when the cold-loving S. eubayanus donated its mitochondria — the power-generating portion of the cell — to the new hybrid, it conferred cold tolerance on the strain. Today, all industrial lager strains retain the S. eubayanus mitochondria and ferment at cold temps.

In a second paper, Baker and Hittinger investigated the ability of S. eubayanus to ferment all the sugars in wort, the barley malt extract that ferments into beer. Most strains of S. eubayanus cannot ferment maltotriose, the second-most common sugar in wort. But the researchers were able to evolve a brand-new protein capable of transporting maltotriose into the cell, revealing a potential path to more aggressive fermentation of all available sugars, a key trait in producing a dry, crisp beer. The paper was published on the pre-print server bioRxiv ahead of publication in the journal PLOS Genetics.

The new research is the first to identify the genetic underpinnings of how two of the most defining features of lager production — cold tolerance and complete fermentation — evolved in S. eubayanus and its hybrid offspring. Hittinger and Baker have applied for patents based on their work, which could provide new opportunities for altering both the temperature range and sugar metabolizing ability of industrial lager strains. 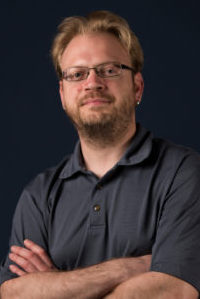 In 2011, Hittinger was part of the team that first isolated S. eubayanus in the wild from forests in Patagonia. Since then, his lab has worked to uncover how S. eubayanus combined with the bread-and-ale yeast S. cerevisiae some 500 years ago to kickstart the behemoth lager beer industry. Their partners in the brewing industry and the UW–Madison food science department helped them zero in on researching the origin of two key traits: growth in the cold and churning through all the sugar in wort.

One clue to lager yeast’s cold preference came from a slate of recent studies showing that temperature tolerance in a wide range of species could be linked, at least partially, to mitochondria. These cellular components generate the bulk of the energy that cells rely on and have their own genome, albeit a small one with just a handful of genes.

By making crosses between the two yeast species with or without their mitochondria intact, Baker produced two sets of hybrids: one had mitochondria from S. cerevisiae, the other from S. eubayanus. Other than the origin of their mitochondria, the hybrids were identical.

When Baker tested the growth of these hybrids at different temperatures, the differences were immediately apparent. The yeast with S. eubayanus mitochondria tolerated cold but wilted in the heat; strains with S. cerevisiae mitochondria couldn’t handle the cold.

“At the most extreme temperatures, it’s basically the difference between growing and not growing,” says Hittinger, who is also a member of the Department of Energy-supported Great Lakes Bioenergy Research Center headquartered at UW–Madison. 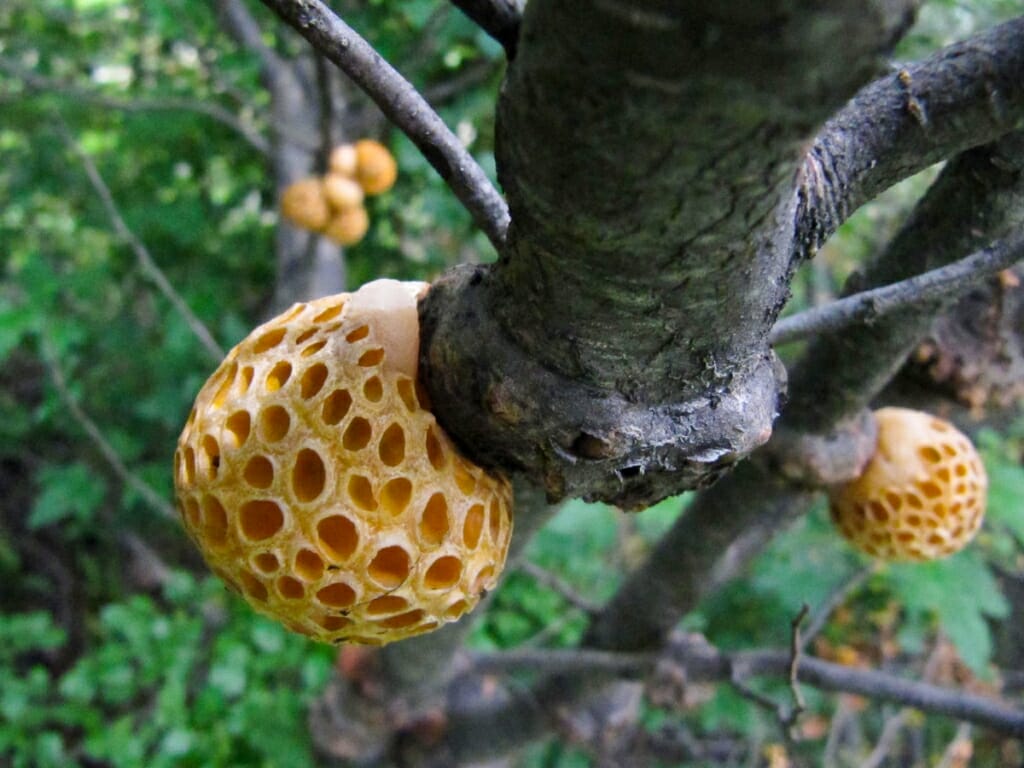 Orange-colored galls, such as these pictured in 2010, from the beech tree forests of Patagonia have been found to harbor the yeast that makes lager beer possible. Photo: Diego Libkind, Institute for Biodiversity and Environment Research

“For the first time we can remake custom lager strains that have the S. cerevisiae mitochondrial genome. And when you do that you get shifted temperature preferences,” says Hittinger. “This is a new category of brewing strains that right now is not in anyone’s arsenal. And we think it very well could have novel properties in beer production.”

But some brewers are looking to move beyond the traditional lager. Since S. eubayanus was discovered in 2011, brewers have tried to brew beer with the wild yeast in hopes of creating a new market. Heineken has released a limited-edition S. eubayanus beer and the Wisconsin Brewing Company in Verona, Wisconsin, is trying to do the same in partnership with the Hittinger lab.

“We’re hopeful that this will … make pure S. eubayanus beers less cloying and drier, more like a conventional lager, but will still retain some of the wild character …”

So Baker and Hittinger tried to evolve better use of maltotriose in S. eubayanus strains. Over several months, the researchers grew S. eubayanus with plenty of maltotriose and a dash of other, digestible sugars — just enough to let the yeast slowly reproduce. Then they looked for any yeast that gained the ability to transport and ferment maltotriose.

More than 2,000 generations later, they found a single strain that could grow on the sugar. When they looked at the yeast’s genome, they found a new gene. The yeast had combined chunks of two genes capable of transporting maltose — a sugar related to maltotriose but smaller and easier to transport.

“And that was particularly interesting because neither of these genes was able to transport maltotriose by themselves, but this new chimeric gene was,” says Baker.

By reconfiguring existing genes, the yeast strain was able to quickly evolve a new trait without having to accumulate many slow, random mutations.

“We’re hopeful that this will provide a way to reduce the sugar content in the final product,” says Hittinger. “It’ll make pure S. eubayanus beers less cloying and drier, more like a conventional lager, but will still retain some of the wild character that you expect from this wild, cold-tolerant strain.”

“This is a really interesting basic science story about how you take the different capabilities of two species that diverged from one another millions of years ago, hybridize them together, and get the best of both worlds to eventually create a multibillion-dollar industry,” says Hittinger.