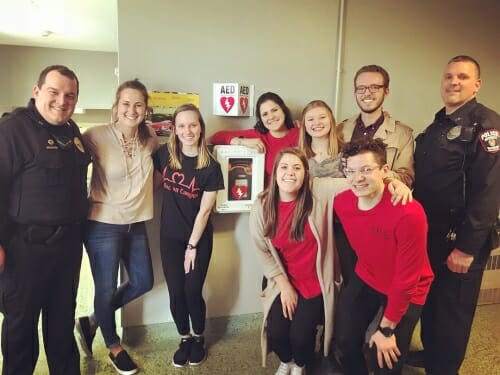 Members of Cardiac on Campus and UWPD pose after installing first AED in Chadbourne Hall.  Photo by Madison Kohler

Jon Derynda had just crossed the finish line of a half-marathon when he collapsed and died in 2015, having suffered what’s called sudden cardiac death.

He was two days shy of his 21st birthday, enjoying the summer between his junior and senior year at UW-Oshkosh, and was running the race with his family. His death blindsided the family, who found it hard to comprehend.

“We were really struck by the thought of a really healthy, active 20-year-old and how this can happen to somebody as healthy as he was,” said his sister, Brittany Derynda.

Derynda and her cousin Jessie Miller, both sophomores at UW–Madison at the time, used the same summer to transform their family’s tragedy into a movement to improve heart health and awareness of heart disease among a student population that often believes it is invulnerable. By December, only six months after Jon’s death, Derynda and Miller had launched Cardiac on Campus, a heart health organization. Now, less than three years later, the organization has taught CPR to more than 500 people, raised thousands of dollars, and installed its first automated external defibrillator (AED).

Derynda and Miller, who are now seniors, hope that improving the heart health of people while they’re young and teaching them how to take care of their hearts will prevent what happened to their family from happening to others.

“When you think about high-risk populations for heart attacks and for heart disease, of course the first statistic that is going to jump in your face is your elderly populations, not your normal college kid,” Miller said. “But we started thinking about this, and it’s the number one killer in the U.S. And so if we’re not going to stop and think about that and think about prevention and awareness at a college age, then how is that statistic ever going to change?”

Cardiovascular disease – the underlying cause of all heart disease, heart failures, strokes, and high blood pressure – is the leading cause of death in the U.S. and is to blame for about one in three deaths, or nearly 836,546 people each year, according to the American Heart Association.

A person does not suddenly “get” heart disease, Miller said, but develops it over long periods of time due to poor nutrition, physical inactivity, genetics, and other factors. Learning your family history with heart disease and getting a preventative screening while you’re in college can give young people enough time to improve their heart health before tragedy strikes.

It’s an uphill battle to convince young people to be concerned about heart health, however.

“People our age just don’t think of it as something we have to be aware of or that we should care about right now,” Derynda said. 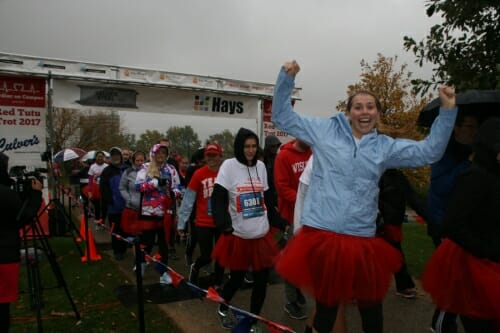 Cardiac on Campus uses two main events to connect the idea of heart health with the lives of college-aged people. In the fall, the organization hosts its Red Tutu Trot 5k, where hundreds of participants run or walk along Lakeshore Path sporting red tutus in awareness of heart disease. In the spring, following the hype of March Madness, they host Cardiac Courts, a 3-on-3 basketball tournament.

Last year, the run garnered over $9,000, enough money for the organization to buy its first AED and donate it to Chadbourne Residence Hall. Miller said the organization hopes to install two more AEDs by the end of the year.

AEDs, in concert with CPR, can more than double a victim’s chance of survival from cardiac arrest, according to the American Heart Association. For every minute that passes without CPR or defibrillation, the chance of survival decreases by at least 7 percent.

Because only 36 percent of Americans have ever seen an AED, Miller said AEDs and people who know how to use them are needed in highly-trafficked areas like dorms, where tens of thousands of people – students, parents, grandparents – pass through.

“Not only does that increase preparedness,  but it also gets in people’s face so that they see this AED and they’re like, ‘I should know how to use that,’” she said.

Past Red Tutu Trots have raised enough money for Cardiac on Campus to offer CPR training for free to UW students and community members. So far, the organization has CPR-certified over 500 people, including roughly 75 percent of residence hall advisors.

In April, 24 teams filled the Natatorium for the 3-on-3 basketball tournament. As teams battled for the championship, people on the sidelines could practice lifesaving techniques on CPR dummies and learn how to use AEDs.

The organization, rooted in Derynda and Miller’s experiences with heart disease, has attracted many students who have their own connections.

Brad Morgan, a member of the organization’s executive board, had sudden cardiac arrest after a cross-country practice when he was 13. A parent had to perform CPR on him for 10 minutes before the paramedics could arrive and use an AED installed on their truck. No one knew, though, that an AED was installed on the wall of his middle school only 20 feet away.

“Back when this happened, I didn’t even know what an AED was,” he said. “But it saved my life.”

Morgan, now a UW–Madison senior, advocates with Cardiac on Campus for more education on AEDs and CPR training, leading sidewalk CPR events on campus where passerby by can learn the lifesaving techniques that saved his own life. 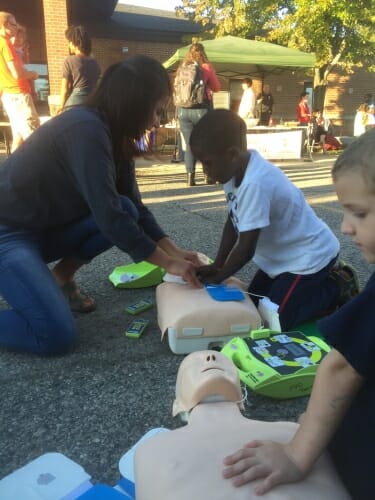 Derynda said the group’s focus now is to continue working with UW Environment, Health and Safety to figure out plausible next steps and placements for future AEDs. When Derynda and Miller graduate this spring, the organization they founded will be passed down to two new co-presidents and an executive board who will continue their cause – and help more people celebrate birthdays each year.

“It’s been enormously, tremendously helpful to have so many people invested in this cause, and many of them at a personal level,” Derynda said.