From poles to polls: Community art project gets out the afghans to get out the vote 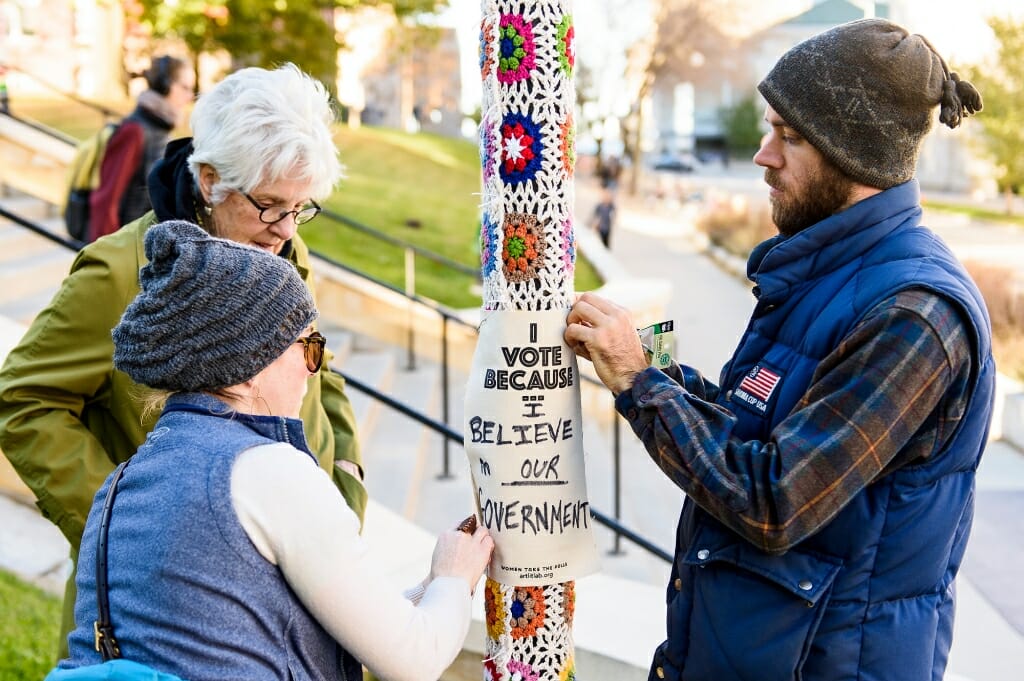 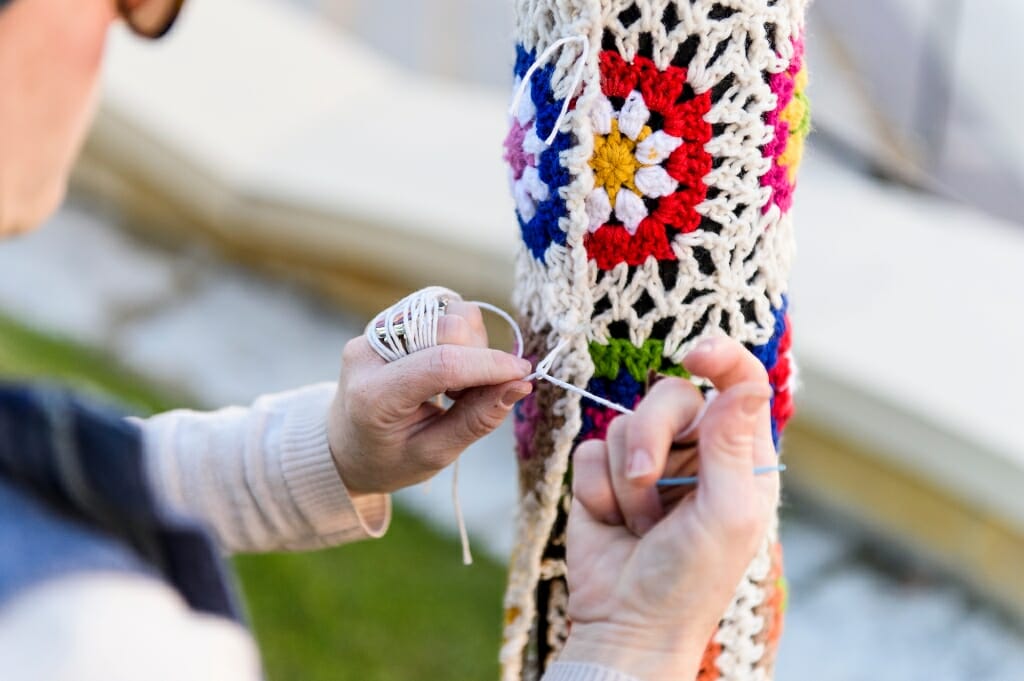 Courtney Henson-Brienen works to install a yarn bomb on a light pole. 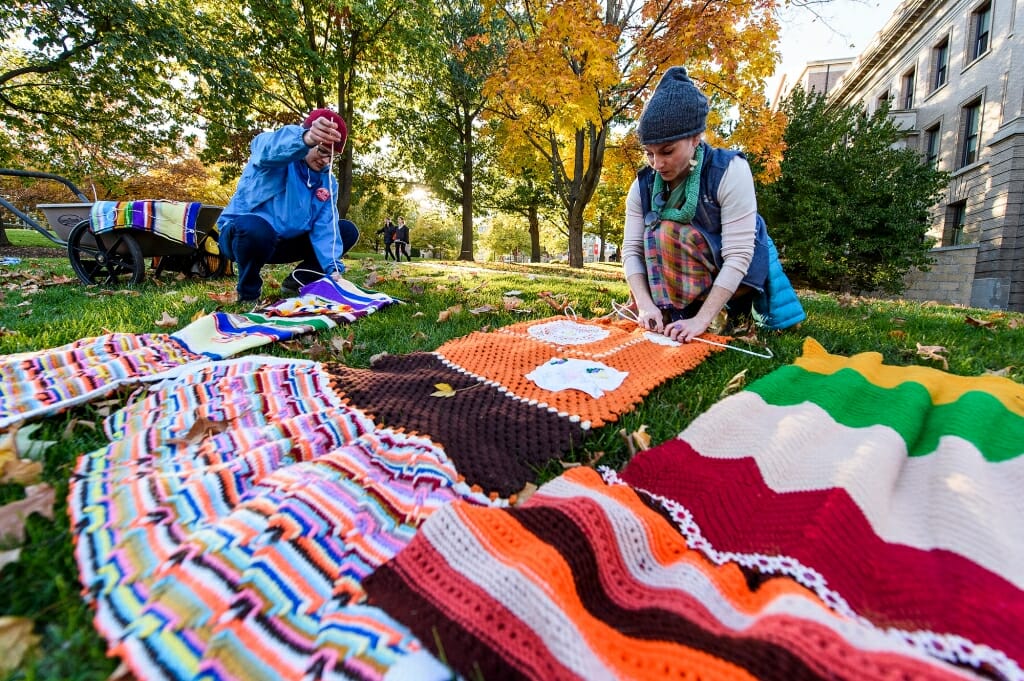 Grunzy, left, and Henson-Brienen assemble some of the yarn bombs. 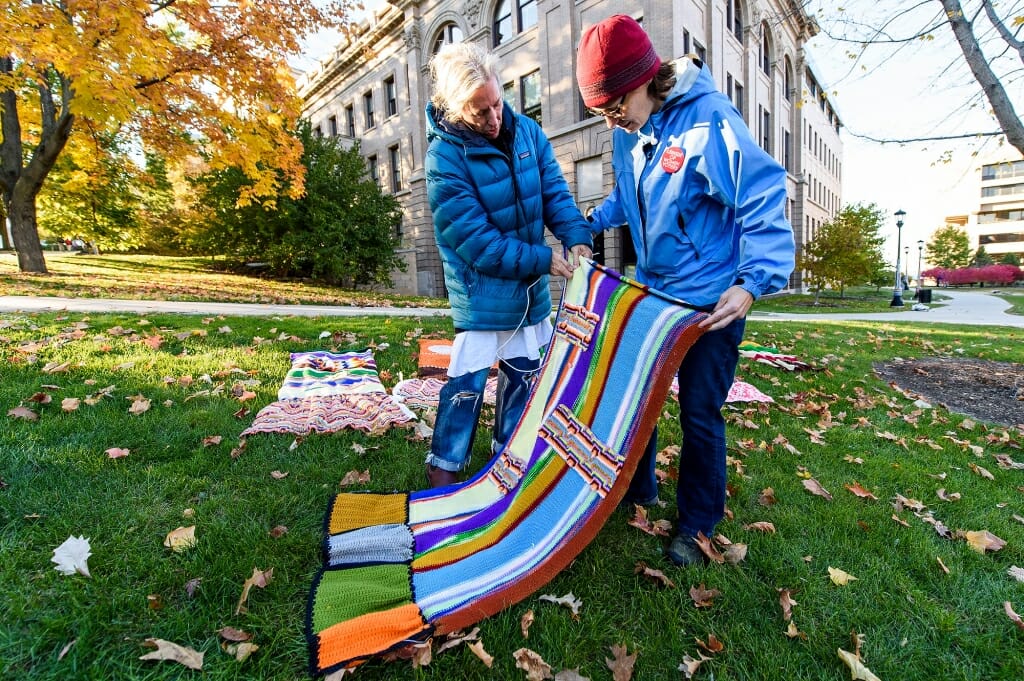 Kelly Park Snider, and Erin Grunzy lay out some of the donated afghans for the project. 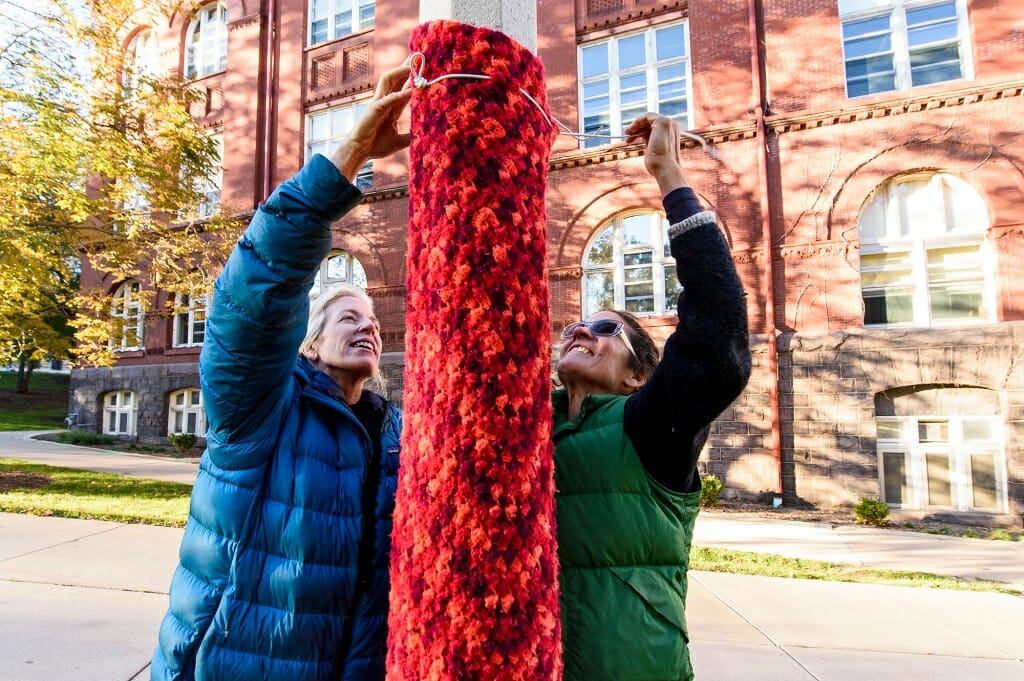 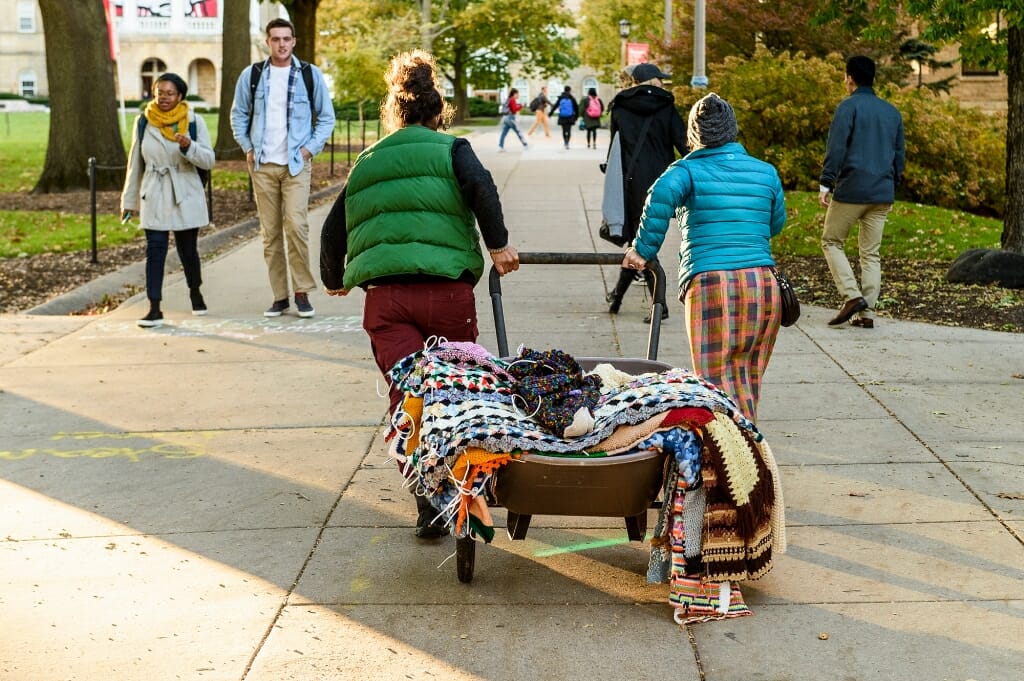 You see a lot of interesting things on Bascom Hill.

A badger dressed in a graduation cap and gown.

A flock of flamingoes.

It’s part of “Women Take the Polls,” an art project designed to encourage people to vote. Unlike robocalls, postcards, and commercials filled with accusations – the “yarn bomb cozies” aren’t telling you who to vote for. The color scheme is definitely liberal, although the project is non-partisan.

This act of “craftivism” is the idea of artists Kelly Parks Snider and Chele Isaac, an alum who got her masters of fine art in 2008.

They got a little help from the Dig & Save at St. Vinny’s where they found donated afghans. At $1.25 per pound, the price was right.

A diverse group of women ranging in age from 9 to 86 gathered at the Arts + Literature Laboratory in Madison to cut them apart and re-fashion them as a salute to the original love and labor that went into them.

“It has been super collaborative which is the way grassroots things work best,” Isaac says.

Isaac added a personal touch by donating part of a cream-colored blanket that was given to her as a wedding gift. It had seen better days before her dog tore a hole in it.

“Moon Pie is such a sweet boy,” Isaac says.

The project’s sponsors include UW–Madison’s Department of Art, Arts + Literature Laboratory, the League of Women Voters of Wisconsin, Arts in Action, and BLINK! Madison Arts Commission.

They hand printed the phrase “I VOTE BECAUSE…” on pieces of canvas and gave them to collaborators with some left blank and attached to the blankets for people passing by to fill in. 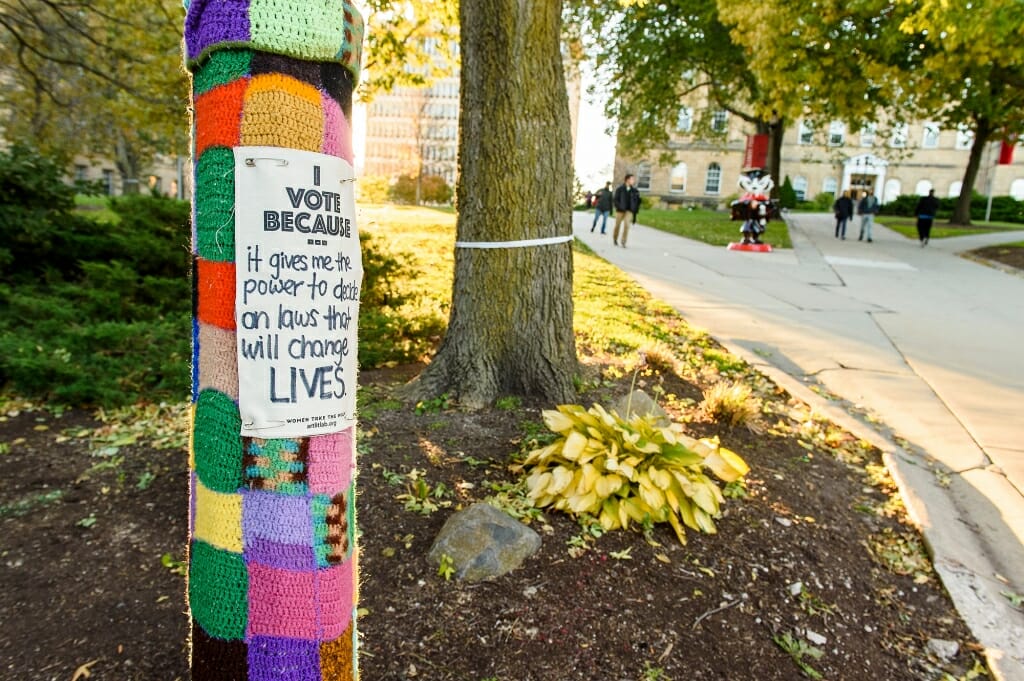 The color of the yarn bombs blends with the autumn leaves. 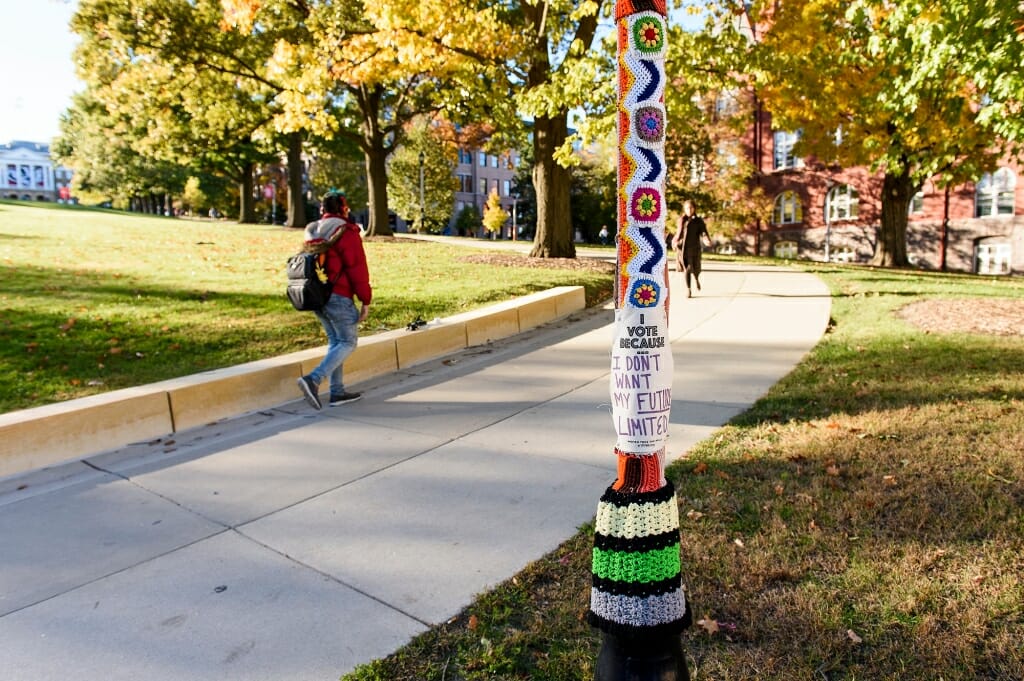 A yarn bomb featuring a personal message about voting. 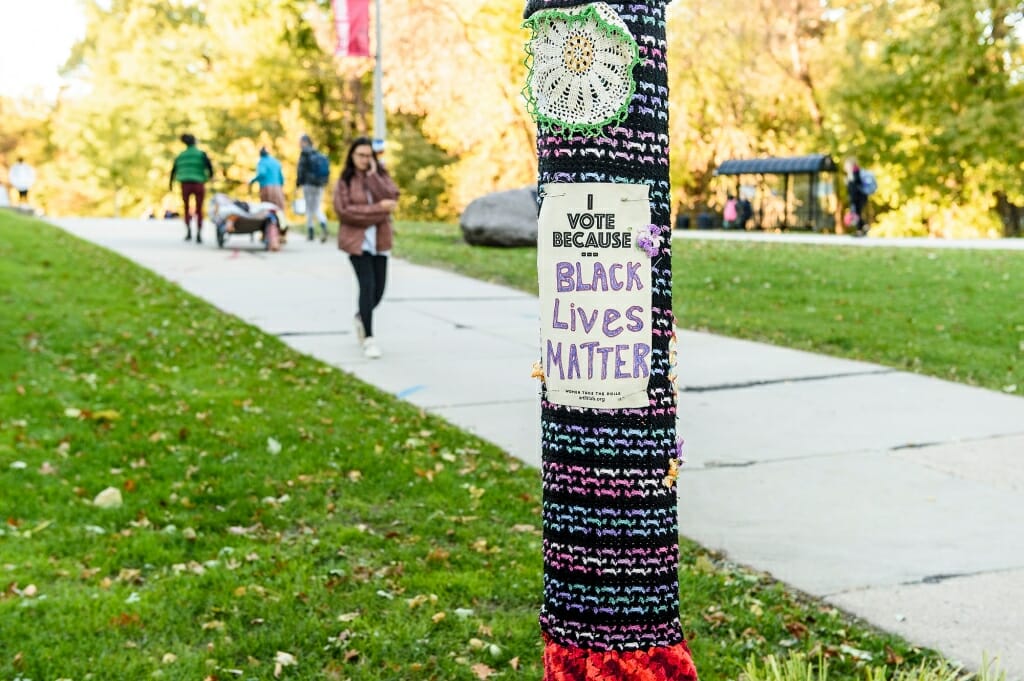 The artists hand printed the phrase “I VOTE BECAUSE…” on pieces of canvas and gave them to collaborators with some left blank and attached to the blankets for people passing by to fill in. 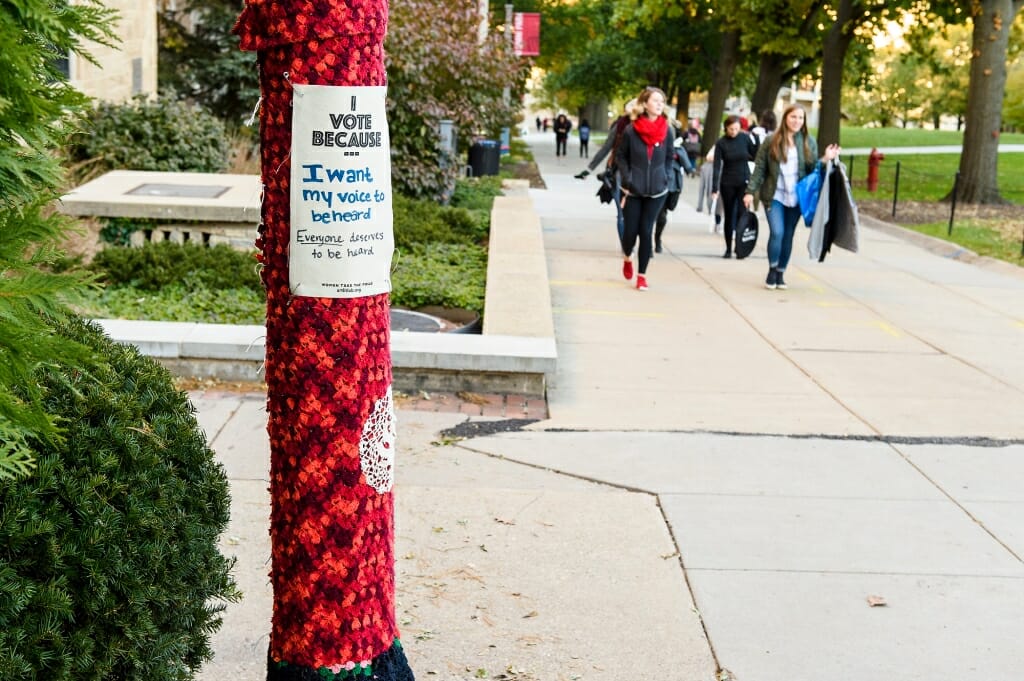 Another personal message on a yarn bomb.

For them, art is a natural way of trying to communicate with people.

“Art equals thinking,” Snider says. “Art can create a surprise and open your eyes to thoughts and ideas you haven’t had before.”

And doing the project in a well-traveled public space like Bascom Hill is a way to reach more people.

“A museum may be free but if you don’t feel like you belong there, are you going to go?” Isaac says.

They plan on keeping the yarn bomb cozies up through Election Day Nov. 6.