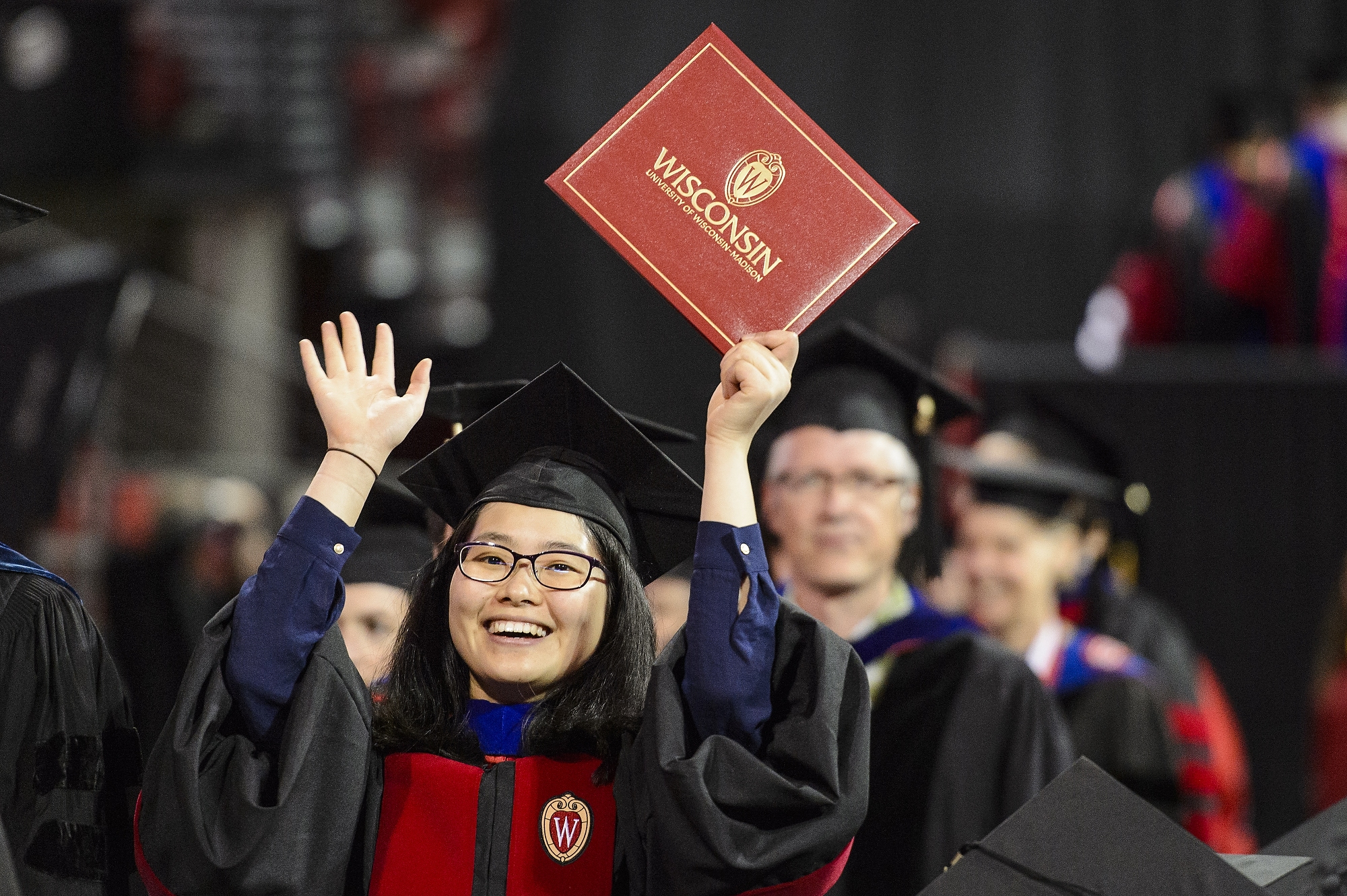 A graduate holds up her diploma cover to show family during Friday’s commencement. Photo: Bryce Richter

There was plenty to cheer about Friday night at the Kohl Center as more than 800 University of Wisconsin–Madison graduate and professional students received degrees.

The pride of family and friends, as well as the graduates, was clear in the smiles and overall atmosphere of the beginning of a weekend full of celebration.

“In your time here, no matter what school, college, department, institute, or research center you’ve been part of, I hope you’ve found an extraordinary community of scholars,” Chancellor Rebecca Blank told the graduates. “I find this university a place whose sheer intellectual excitement and depth renews my energy and reinforces my passion about my work.  I hope you feel the same.”

She encouraged graduates to not only share their ideas and knowledge but to listen to others, reminding them that effective communication isn’t easy.

“The classic academic approach of giving people a lot of facts and figures doesn’t always work very well. Good communication requires listening, and understanding the different ways in which people make sense of information,” Blank said. “I hope that you will use your education to make this world a little better. And I hope that you will take an active part in a new and more productive conversation that helps to discern the true from the false, the real from the unreal, and the facts from the fiction.”

Regina Millner, president of the UW System Board of Regents, congratulated the graduates for their hard work and commitment to learning and welcomed them to their new roles as graduates of UW–Madison.

“There is no one better than you to tell the story of this university’s value and its positive impact. As a UW alum, you are carrying on our tradition of excellence,” Millner said. “You are becoming the next generation of graduates who see what is needed in the world around us, and then work to find a solution. You will become the healers, the researchers, the innovators and entrepreneurs of tomorrow.”

Honorary degrees were presented to sociologist Cora Marrett, educator and philanthropist Tashia Morgridge, and the late musician Clyde Stubblefield. Recipients are selected for uncommonly meritorious activity exhibiting values that are esteemed by UW–Madison. Preference is given to those who are connected in some significant way with the state or the university.

Marrett, nominated by the Department of Sociology, holds a bachelor’s degree from Virginia Union University and a master’s degree and a doctorate from UW–Madison, all in sociology. She held faculty positions at the University of North Carolina at Chapel Hill and Western Michigan University before returning to UW–Madison as a faculty member in 1974. In 1992, she became an assistant director at the National Science Foundation, where she led the newly formed Directorate for Social, Behavioral and Economic Sciences. From 2001 to 2007, Marrett was the University of Wisconsin System’s senior vice president for academic affairs. In 2007, she was hired once again as an assistant director at the NSF and became deputy director in 2011. She also served twice as acting director. Marrett once served on the Committee for Honorary Degrees and said she never expected to receive such an honor. 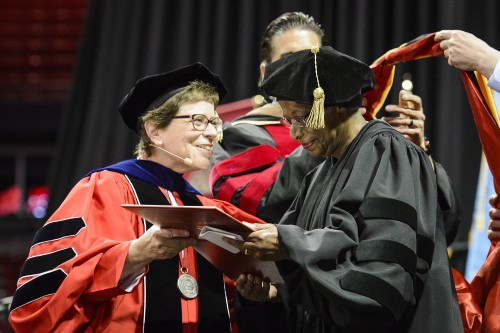 “The University of Wisconsin–Madison expects all of us who receive degrees – whether earned traditionally or not – to exhibit the values the institution exalts.  Perhaps nothing embodies the values better than does the Wisconsin Idea,” Marrett said. “I can only hope that the recognition I am given results in no small part from my dedication to that idea.  But today let me reaffirm my determination to cultivate opportunities that reach across generational, geographic, demographic, and other boundaries.

As an educator, advocate, volunteer and philanthropist, Tashia Morgridge has made contributions to improve the state of public education throughout Wisconsin, across the country and around the world. Morgridge, nominated by the School of Education, received her bachelor’s degree in education from UW–Madison, later received a master’s degree from Lesley University in Massachusetts and was a special education teacher for more than 13 years. She and her husband, John, have long been supporters of the university, including spearheading a matching gift campaign that raised more than $250 million for faculty support.

She reflected upon the importance of preserving knowledge and sharing it, emphasizing that it is an important part of the next phase of their lives. 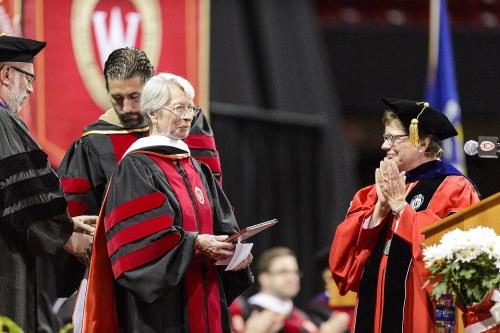 “As an alum, I have been invigorated by the engagement both John and I have been able to have here at the university,” Morgridge said. “It has allowed us to be involved with young minds, to be lifelong learners and to share our insights and wisdom with others.”

It was then time to posthumously honor Stubblefield, who died Feb. 18 after a long battle with kidney disease. Stubblefield, jointly nominated by the College of Engineering and the School of Music, was born in Chattanooga, Tennessee, but had called Madison home since the 1970s.

Stubblefield “kept the world’s toes tapping,” said Leann Tigges, professor of community and environmental sociology and chair of the Committee on Honorary Degrees. “Stubblefield used music to bring people together, playing with James Brown at Boston Garden after the death of Martin Luther King Jr., and performing for soldiers in Vietnam as part of Brown’s band.”

Once again, his music brought people together during the ceremony as people listened to an excerpt of “Funky Drummer” as recorded by James Brown, with drum solo performed by Stubblefield.

“This song’s drum break is among the world’s most sampled, used by Public Enemy, Beastie Boys, Prince, George Michael, Sinead O’Connor, and many others,” Chancellor Blank said. “Clyde frequently concluded his communications with friends and family throughout his life with this salutation, Peace, love, happiness and good health!”

Commencement continues Saturday with a ceremony for more than 6,000 bachelor’s, master’s and law degree recipients at Camp Randall at noon.