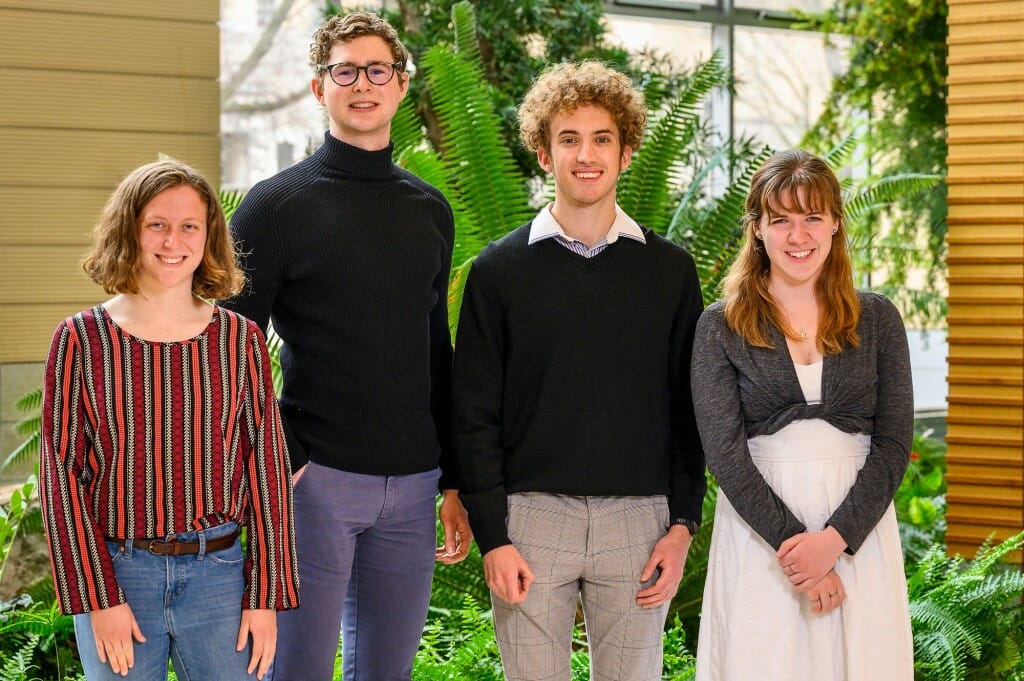 From left to right, UW–Madison undergraduates Sarah Fahlberg, Samuel Neuman, Elias Kemna, and Lucy Steffes are each recipients of the 2022 Barry M. Goldwater Scholarship for undergraduate excellence in the sciences. The group is pictured at the Wisconsin Institutes for Discovery. Photo: Althea Dotzour

Four University of Wisconsin–Madison students have been named winners of 2022 Barry Goldwater Scholarships, one of the most prestigious awards in the U.S. for undergraduates studying the sciences.

Each university in the country may nominate up to four undergraduates for the annual award. To have all four candidates win is remarkable, says Julie Stubbs, director of UW’s Office of Undergraduate Academic Awards.

“I’m so proud of Lucy, Sarah, Elias and Samuel and all they’ve accomplished in their young academic careers,” Stubbs says. “These awards also reflect the strong emphasis this campus places on providing rich research opportunities for our undergraduates.”

The four UW–Madison students are among 417 Goldwater Scholars named this year out of 1,242 college sophomores and juniors nominated by 433 academic institutions. The scholarship program honors the late Sen. Barry Goldwater and is designed to foster and encourage outstanding students to pursue research careers in the fields of the natural sciences, engineering, and mathematics.

More about this year’s winners:

Congress established the Barry Goldwater Scholarship & Excellence in Education Foundation in 1986. Goldwater served in the U.S. Senate for over 30 years and challenged Lyndon B. Johnson for the presidency in 1964. Goldwater died in 1998. A list of past winners from UW–Madison can be found here.