J.J. Watt, a powerhouse on and off the field, to be commencement speaker

NFL star J.J. Watt is known as much for his big heart as his athletic dominance. This May, he’ll return to Camp Randall and give back to the Badger community that helped shape him.

Watt, who attended the University of Wisconsin–Madison from 2008-10 and played for the Badgers, will share his approach to life with graduates on May 11 as the spring commencement speaker. 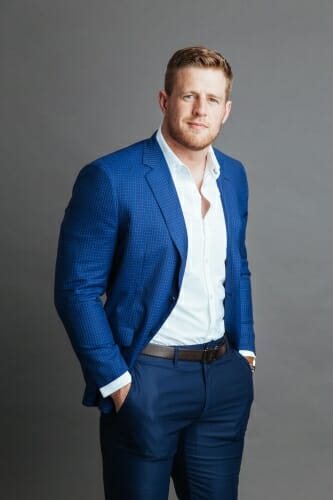 “I can’t wait to get back to Camp Randall,” says Watt, a philanthropic role model to many. “I’m so excited to see everybody there.”

Commencement speakers are selected by senior class officers. The university covers the speaker’s travel expenses but does not pay a fee or other honorarium.

Watt was born in Waukesha, Wisconsin, and graduated from Pewaukee High School. His rise through the football ranks has become an inspiring tale to underdogs everywhere.

He gave up a football scholarship after one season at Central Michigan University, transferring to Wisconsin as a walk-on. Despite being told he wasn’t big enough or fast enough to play for UW–Madison, he persevered.

“I was gambling on myself,” he told On Wisconsin, the university’s alumni magazine, in 2015. “There was just no option but to make it work.”

As a Badger, he became a star defensive lineman and second-team All-American. He left school a year early and was signed by the Houston Texans as the No. 11 overall draft pick of 2011. He has played for the Texans eight seasons, receiving the Associated Press NFL Defensive Player of the Year Award three times in his first five seasons.

Sports Illustrated dubbed Watt “the best defensive player of his generation.” His athletic accomplishments, coupled with his charitable efforts, led the magazine to name him co-Sportsperson of the Year in 2017.

After Hurricane Harvey devastated Houston in 2017, Watt’s philanthropic venture, the Justin J. Watt Foundation, launched a goal of raising $200,000. In just a couple of months, the total reached $37 million, including $100,000 from Watt.

“I think it goes without saying that no athlete has ever done this before — just that amount of money in that short amount of time, and part of it was the humble way he started it,” Sports Illustrated reporter Robert Klemko said at the time. 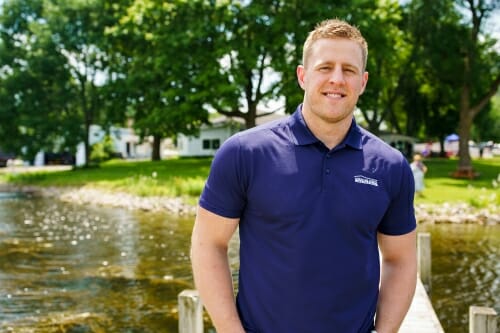 J.J. Watt in his hometown of Pewaukee. Photo courtesy of American Family Insurance

The same year, Watt was named the Walter Payton NFL Man of the Year, an award that honors a player for his excellence on and off the field.

“We are so excited to invite J.J. Watt back to Camp Randall,” says Ronald Steinhoff, senior class president. “When thinking of Badger alumni who are striving to improve their community, J.J. Watt quickly came to mind because of his fundraising efforts in Houston. His ability to lead, on and off the field, made him an easy choice. We can’t wait to hear how J.J. Watt will send graduates out into a world that needs more Badgers who give back, just as he did.”

Watt’s foundation, created in 2010 when he was still an undergraduate at UW–Madison, provides after-school athletic opportunities for children in communities where funding is insufficient or non-existent.

The foundation’s motto might provide a hint to the advice Watt will give graduates: “Dream Big, Work Hard.” 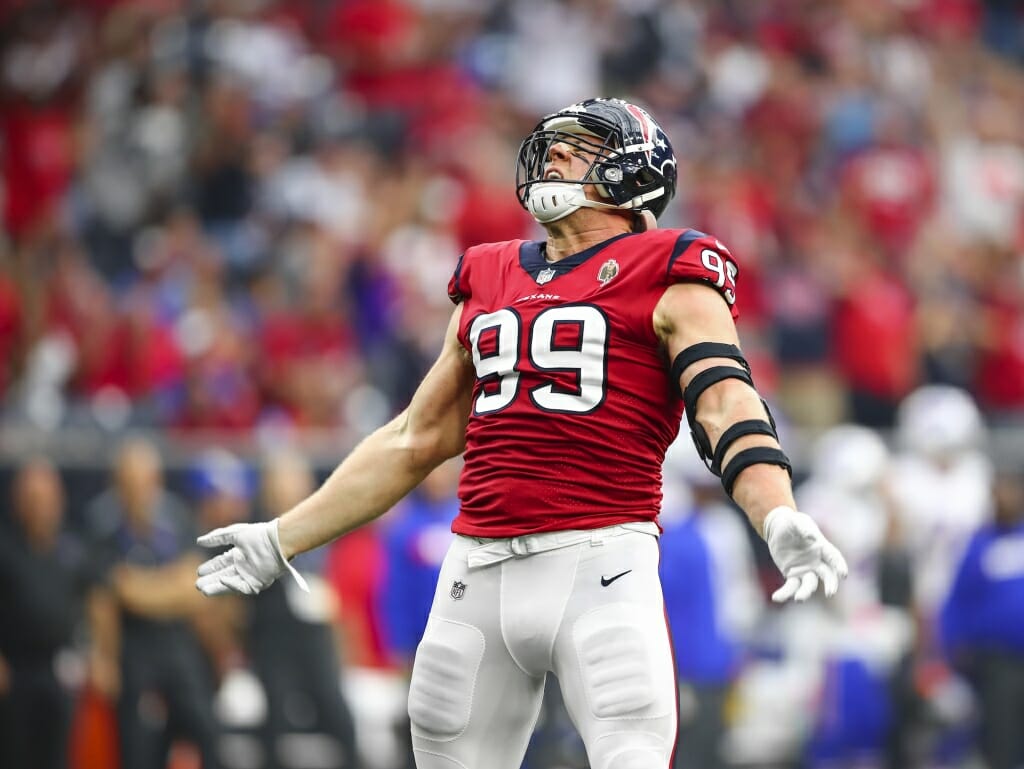 J.J. Watt celebrates during the Oct. 14 home game against the Buffalo Bills. The Texans won 20-13. Photo courtesy the Houston Texans 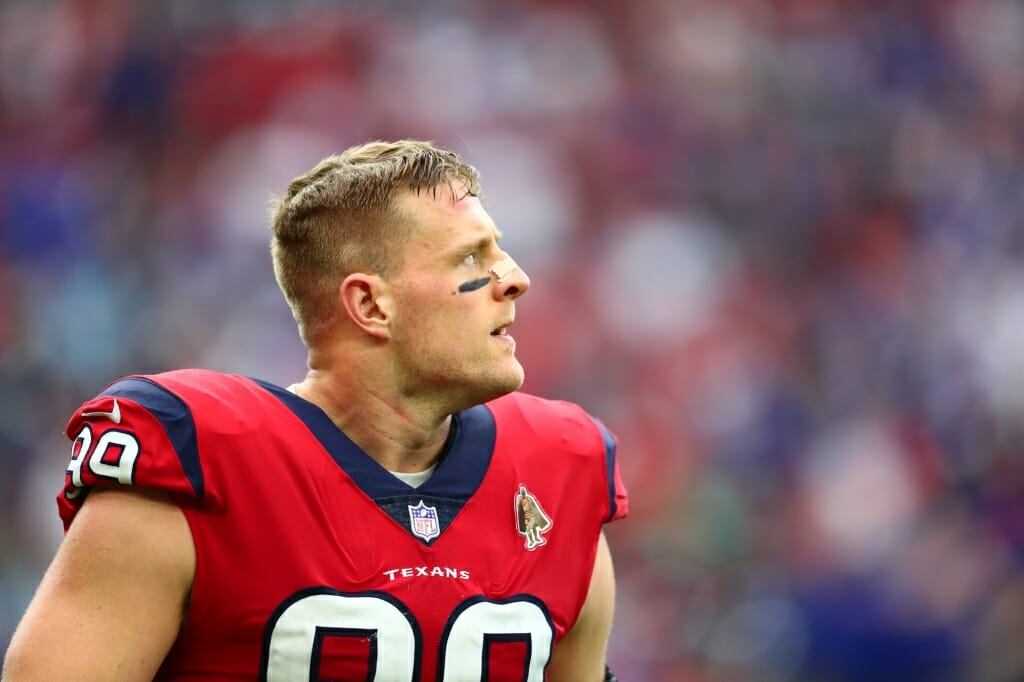 J.J. Watt on the sidelines during the Oct. 14 game. Photo courtesy the Houston Texans 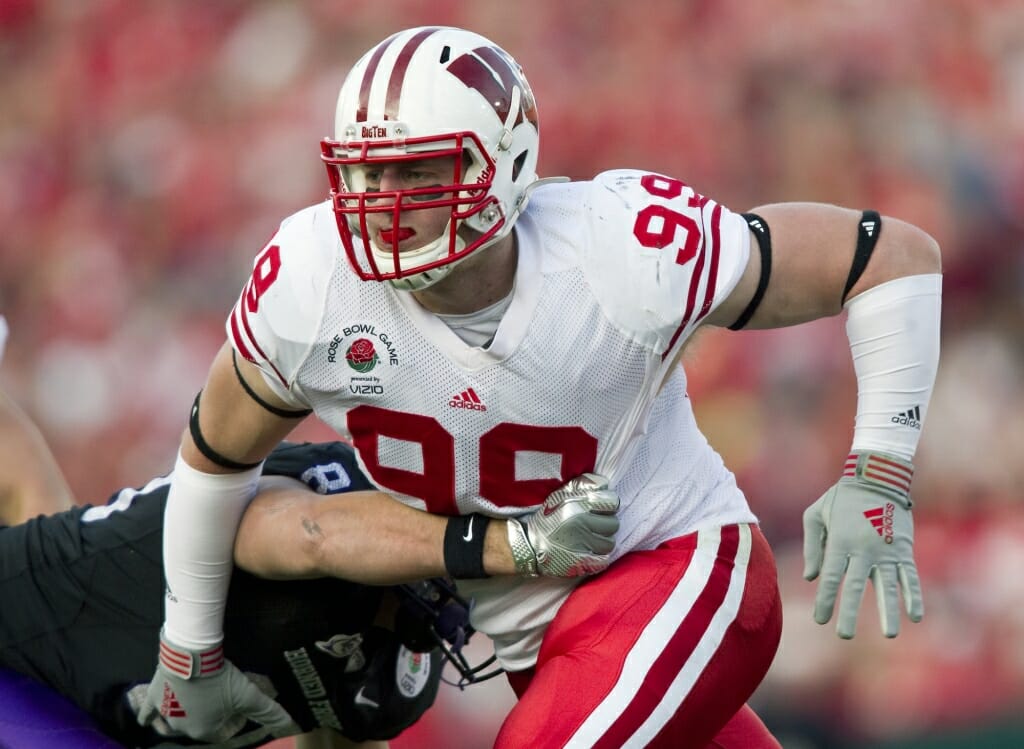