The IceCube Lab at the South Pole collects data from over 5,000 IceCube light sensors. It is then filtered and cleaned and sent north via satellite. Video: Fragment of “Chasing the Ghost Particle: From the South Pole to the Edge of the Universe.” Credit: WIPAC/MPM

The National Science Foundation today announced that it has renewed a cooperative agreement with the University of Wisconsin–Madison to operate IceCube, a massive neutrino telescope buried deep in the ice beneath the South Pole.

The five-year, $35 million cooperative agreement calls for the continued operation and management of the observatory located at NSF’s Amundsen-Scott South Pole Station. In 2013, the IceCube scientific collaboration reported the first detection of high energy cosmic neutrinos, opening a new astronomical vista to the universe and some of its most violent phenomena. 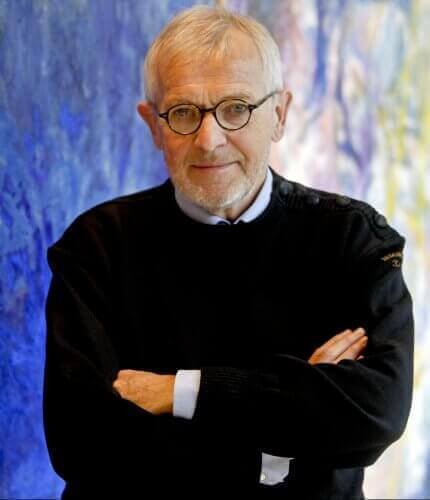 Francis Halzen, principal investigator of IceCube and professor of physics at the University of Wisconsin–Madison. Photo: El País/BERNARDO PÉREZ

Since its inception 15 years ago, IceCube — centered around a detector array consisting of 5,000 optical sensors frozen in the ice a mile beneath the South Pole — has been administered through UW–Madison, in recent years under the auspices of the Wisconsin IceCube Particle Astrophysics Center (WIPAC).

“This is extremely good news,” says Francis Halzen, a UW–Madison professor of physics and the principal investigator for the project. “Over the years we have come to know what it takes to successfully operate the detector.”

“NSF is excited to support the science made possible by the IceCube Observatory because it’s at the cutting edge of discovery,” says Scott Borg, head of Polar Programs’ Antarctic sciences section. “But to make ambitious research of this kind a reality requires cooperation within the agency, which is why we’re delighted that IceCube is in partnership with MPS. It’s also science on a global scale, relying on strong international cooperation to be successful.” 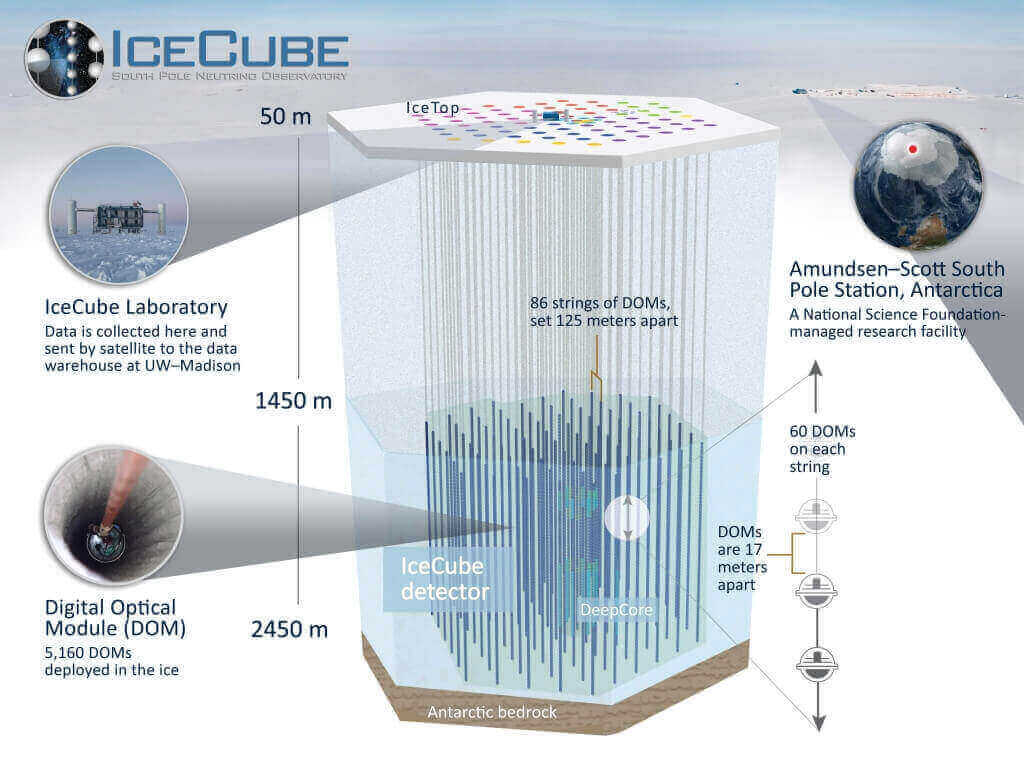 Neutrinos are nearly massless particles created in nuclear reactions and, in nature, by some of the most energetic events in the universe. Colliding black holes, the violent cores of galaxies, supernovas and pulsars are believed by scientists to be accelerating the high energy particles, many billions of which pass through the Earth every second. Because they have almost no mass and rarely interact with matter, they are excruciatingly difficult to detect and require detectors of the size of IceCube, which occupies a cubic kilometer of Antarctic ice, to capture the fleeting bursts of light created when the occasional neutrino crashes into another particle. 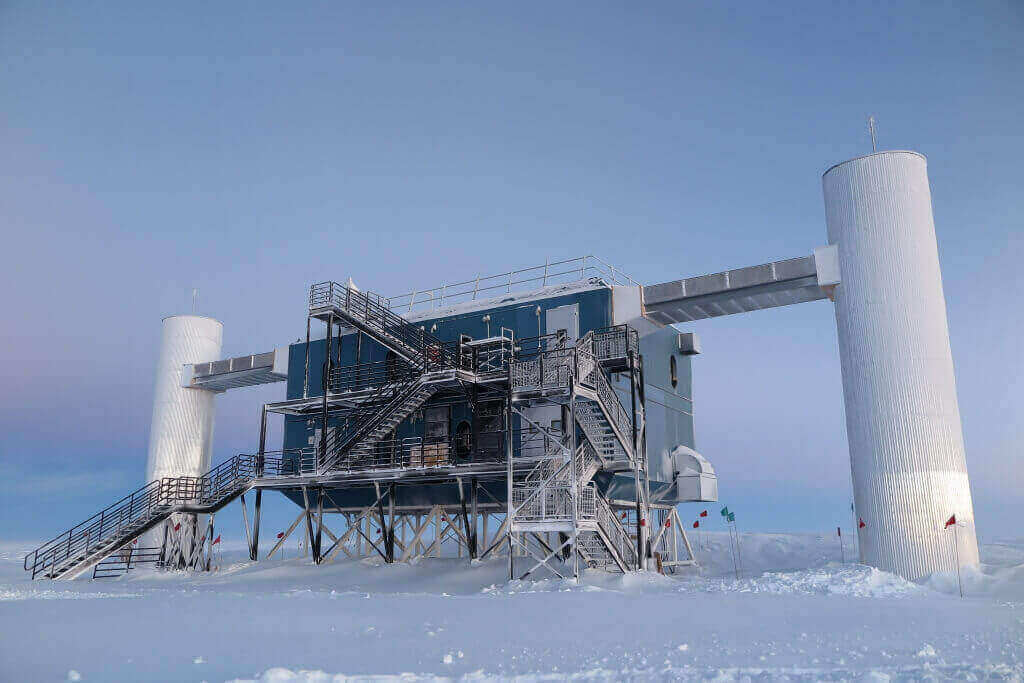 The IceCube Laboratory at the Amundsen-Scott South Pole Station hosts computers collecting raw data from cosmic neutrino events. Events selected as interesting for physics studies are sent to UW–Madison, where they are prepared for use by any member of the IceCube Collaboration. Photo: Erik Beiser, IceCube/NSF

But the elusive qualities that make neutrinos so hard to detect also confer significant insight to science. Since the particles glide through space unhindered by stars, planets and the powerful magnetic fields that pock the universe, it means they are virtually pristine and harbor valuable clues about their yet-to-be confirmed sources.

IceCube has proven to be a workhorse telescope. It is operational 99 percent of the time and, according to Halzen, has so far detected more than a million neutrinos, “a few hundred of which are astronomically interesting.

“Five years ago it was about discovering cosmic neutrinos. Now it’s about doing astronomy and particle physics with them,” notes Halzen of the quest to follow the particles’ tracks back to their sources, a feat yet to be accomplished. 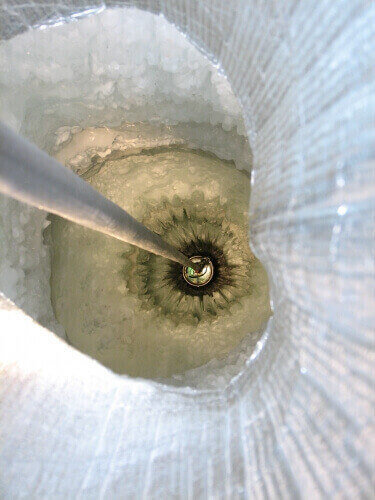 The deployment of each of the 86 IceCube strings lasted about 11 hours. In each one, 60 sensors (called DOMs) had to be quickly installed before the ice completely froze around them. Photo: Mark Krasberg, IceCube/NSF

“All over the world IceCube is considered the flagship of neutrino astronomy,” notes Olga Botner, the IceCube collaboration spokesperson and a professor of physics and astronomy at Sweden’s Uppsala University. “IceCube’s discovery of extraterrestrial neutrinos is a major breakthrough and a crucial first step into as yet unexplored parts of our violent universe. It also represents a step towards the realization of a 50-years-old dream — to figure out what cosmic upheavals create the ultra-high energy cosmic rays, detected at Earth with energies millions of times larger than those achievable by even the most powerful man-made accelerators.”

Headquartered at UW–Madison, IceCube includes a staff of nearly 60 scientists, engineers and technicians in Madison.

“There are many technical challenges underlying the operation of a large neutrino observatory at the South Pole, many that would be hard to anticipate,” says Kael Hanson, IceCube’s director of operations and a UW–Madison professor of physics. According to Hanson, because of IceCube’s complexity, ability to gather large data sets, and place among the world’s front-line astrophysical detectors, it also contributes to emerging computational technologies for managing and analyzing novel scientific information. 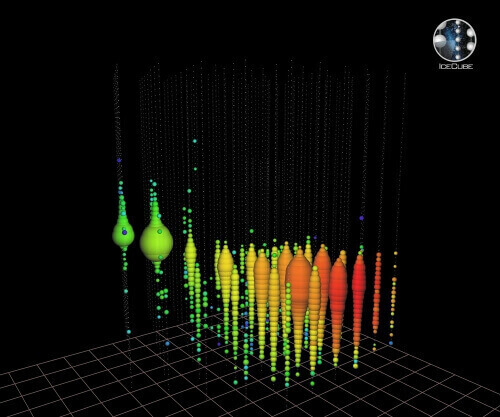 When detected on June 11, 2014, this was the highest energy neutrino event on record. Image: IceCube Collaboration

Halzen says the performance of the IceCube detector has steadily improved and a key goal will be to speed up the analysis of neutrinos of interest in order to quickly alert other observatories.

“We’re going to detect interesting neutrinos in real time and we can send word to other observatories,” notes Halzen. “If we can do it in real time, we can be much more effective and we can alert, for example, optical observatories and other detectors” for combined observing.

For example, because neutrinos from an event like a supernova explosion arrive at the IceCube detector a few hours before photons, the particles that make up visible light, alerts can be quickly sent to other types of observatories. “With an early warning from neutrino and possibly gravitational wave detectors to all other telescopes, we might have the astronomical event of the 21st century,” says Halzen.

The five-year cooperative agreement begins April 1, 2016, and may be renewed for another five-year period if the detector and collaboration continue to operate successfully.