For more than two decades, University of Wisconsin–Madison engineers have leveraged a unique experiment called Pegasus to advance the field of fusion energy. Now, that program in the UW–Madison Department of Engineering Physics is being transformed to play an even greater role in the national fusion research program supported by the U.S. Department of Energy’s Office of Fusion Energy Sciences.

The ultimate goal of this research is to help reduce the cost and complexity of future fusion reactors, which could potentially provide an abundant source of clean energy by harnessing the process that powers the sun.

DOE has awarded the Pegasus fusion research program $7.9 million in new grants and additional funding, more than doubling the program’s budget. Principal investigator Ray Fonck and his team will add staff and undertake a major reconfiguration of the decommissioned Pegasus toroidal experiment, converting it to a much more powerful facility with an expanded scientific program. 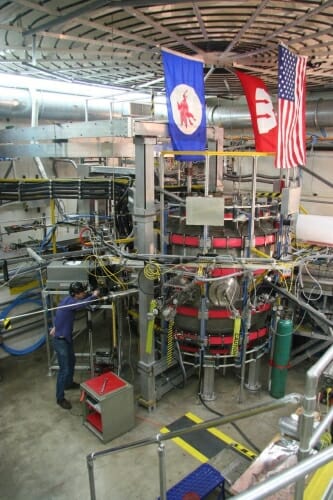 Called the Pegasus-III experiment, the overhauled facility will provide a dedicated U.S. platform to study innovative techniques for starting a plasma, the ultra-hot ionized gas that releases energy in a fusion reactor.

“We are forming the Pegasus-III program to make it an exclusive component of the national fusion program with a strong focus on one issue. That issue centers on an important step: determining the best way to start a plasma with strong electrical current,” says Fonck, a professor emeritus of engineering physics. “In a sense, we’re working to provide a match to light the fusion fire in future reactors.”

The Pegasus-III experiment consists of a compact donut-shaped magnetic bottle, which is called a tokamak, to hold very high-temperature plasmas. Almost every tokamak-style fusion reactor in the world uses a technique called magnetic induction to drive the current that creates a plasma.

However, magnetic induction has its limits — especially in a nearly spherical or compact tokamak, shaped like a cored apple with a skinny center hole.

“There’s no space in the center for the magnetic induction,” Fonck says. “It’s been on the list for a good 15 to 20 years that the compact spherical tokamak community has to solve the problem of how to start a mega amp of current without magnetic induction.”

In addition, even standard larger tokamak reactors would realize improvements in cost and complexity if the typical induction magnet can be eliminated.

Many research groups — including Fonck’s — have made partial advances in this area, but there’s no clear winner.

Now, in a new era that establishes the Pegasus-III experiment as a comparative proving ground for the entire national fusion research program, the researchers will test a handful of the most promising concepts. Ultimately, Fonck says, they will implement the best solution, however it shakes out, on the larger national experiment at DOE’s Princeton Plasma Physics Laboratory.

The changes to create Pegasus-III will be extensive.

“It’s a major expansion,” says Fonck. “The DOE funding will provide new magnetic coils on the machine to quadruple the magnetic field, new power systems for bursts of electrical power up to 250 megawatts, new control systems, a new heating system and a new control room. We’ll also implement critical new diagnostics that you usually don’t have on university devices.” 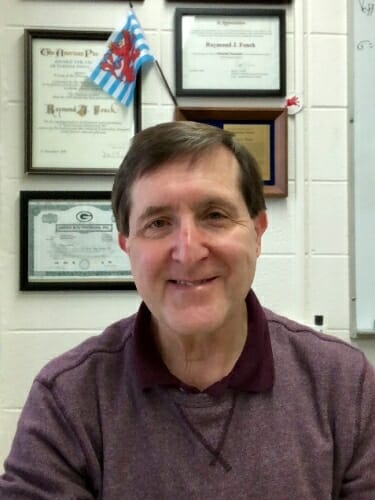 The expanded research program includes collaborations with the University of Washington, which is providing an additional plasma initiating technique, as well as with Oak Ridge National Laboratory and the Princeton lab.

The upgraded diagnostics on Pegasus-III will allow the researchers to learn more about what’s happening in the plasma. One important new capability is the ability to measure ion activity.

“Because of the way the current forms when you don’t use magnetic induction, it uses the same physics that you see in the solar wind and the solar corona — a process we call magnetic reconnection,” Fonck says. “Basically, that process of breaking up magnetic field lines heats the ions, and by looking at them, you can tell a lot of what’s going on in detail about the plasma and the process by which we’re driving current.”

Unlike every other major tokamak experiment in the world, one piece of technology that will be absent from the experiment is the central magnetic inductor called a solenoid, which has been the traditional tool for magnetic induction startup of the plasma.

“This makes the research program both riskier and more exciting, since we’ll need to make some new combination of startup techniques work reliably to be able to study a plasma at all,” Fonck says.

The solenoid magnet also has provided a central tool for maintaining the plasma current once established. Instead, a new radio-frequency wave system will fulfill this second role at modest power initially, and the new experiment also will include diagnostics for determining how the radio-frequency waves help drive current.

The new DOE funding allows the team to add scientific staff members and graduate student researchers to the effort. Assistant Professor Stephanie Diem, a recent addition to the Department of Engineering Physics faculty, has joined to help guide the program and students.

The conversion of Pegasus to Pegasus-III has already begun, but construction activities are currently on hold due to the COVID-19 pandemic. The staff and students are continuing their design work, procurement activities and project coordination remotely, while preparing for when they can return to the laboratory to resume building the Pegasus-III facility.

Fonck says UW–Madison is a fitting place for this next step for fusion.

“We have both the expertise on this technique and an existing facility that can be converted to this opportunity,” he says. “And all of the physics that’s involved in driving these currents and making these techniques can be done at a smaller scale at a university. It’s cheaper and more flexible, and it gives a wonderful opportunity for students to get an education and to work with people from other labs.”