Philosophy professor Steven Nadler is known for serious scholarship, from an influential  biography of Spinoza to “Rembrandt’s Jews,” a 2004 Pulitzer Prize finalist.

For his latest book, Nadler has chosen a very different format: full of bright illustrations and characters speaking in word bubbles.

“Heretics! The Wondrous (and Dangerous) Beginnings of Modern Philosophy,” is a graphic novel, or a story told in comic-strip format. Incorporating a good bit of humor, the book explores 17th-century thinkers — Galileo, Descartes, Spinoza, Newton — who challenged authority and fundamentally changed how we view the world, sometimes at great personal risk. 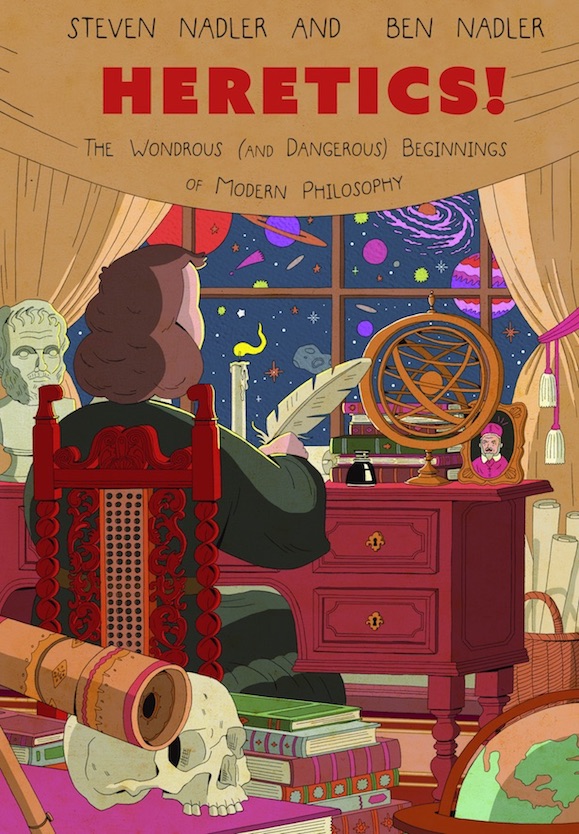 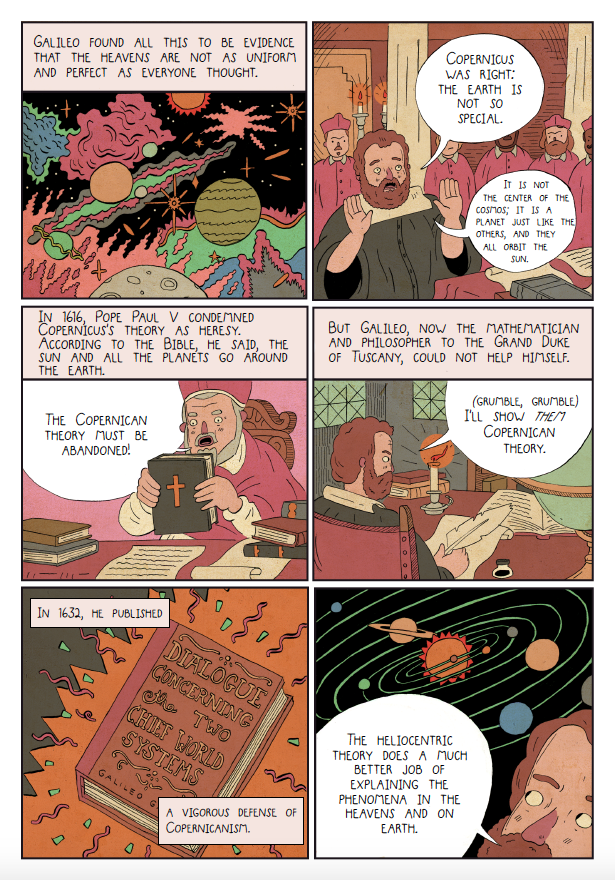 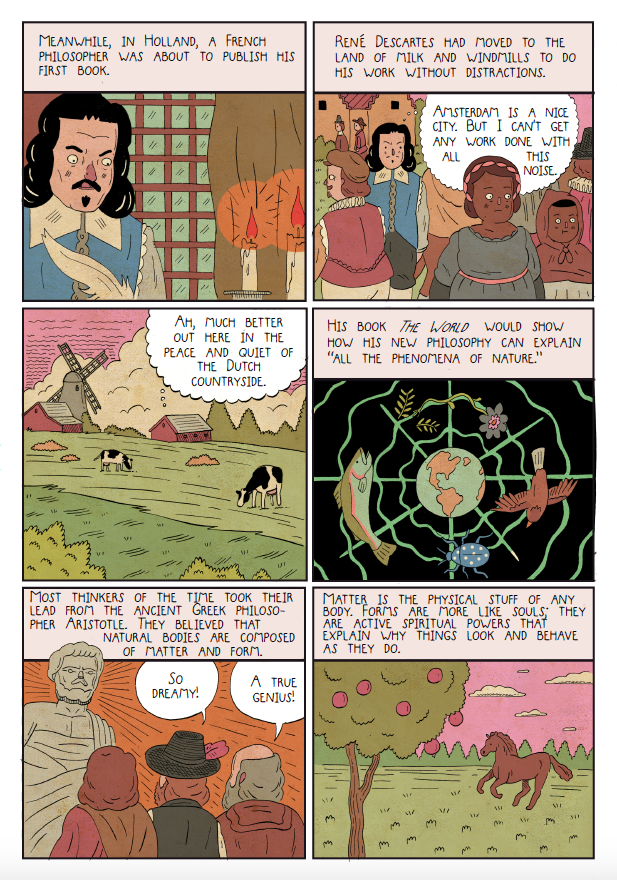 Nadler pitched the idea to his publisher, Princeton University Press, as a way to make philosophy more accessible and interesting to a broader reading public.

“Historians are very good at writing popular history books,” he says. “There’s no reason philosophers can’t do the same.”

The book is a collaboration with his son, Ben Nadler, a freelance illustrator in Chicago. The father-son aspect has sparked considerable curiosity at bookstore appearances. People want to know how their relationship fared. 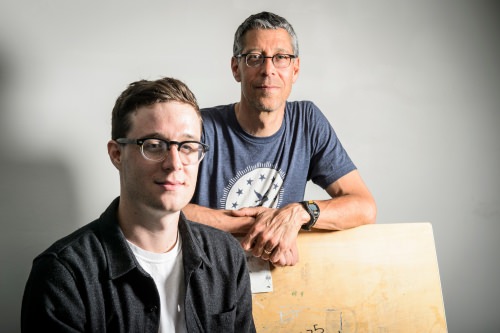 “We were able to maintain our love for each other,” Steven Nadler, 58, said to laughs at a packed book signing June 9 at Mystery to Me Bookstore in Madison.

Ben Nadler, 25, says it was a relief to work with someone he didn’t have to “put on professional airs with.”

“We could be completely honest in critiquing each other’s work,” he says, during an interview at his parents’ home in Madison.

Ben had just graduated from the Rhode Island School of Design and was living in Seattle when his dad suggested the collaboration. He was trying to launch his freelance career while working at a café and doing an unpaid internship at a design firm. 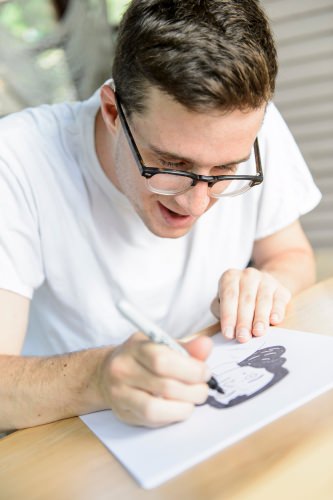 Ben Nadler works on a drawing at his parents’ home in Madison. Photo: Bryce Richter

“I was in no position to turn down a paying gig,” he says, making his dad laugh. “But it also sounded like a lot of fun, and it was an opportunity to learn about what my dad has been up to my whole life.”

His dad’s work had always gone over his head, Ben says. With this project, he had to understand it or the book wouldn’t get made. His dad bought him a copy of Bertrand Russell’s “History of Western Philosophy.”

“Did you read it?” his father asks.

“I flipped through it,” Ben says. “It didn’t have any pictures.”

“Heretics!” bursts with illustrations — more than 900 over 181 pages. After his father completed the text, Ben put ink to paper, a process that took about 18 months. He worked full time on the illustrations, supporting himself on the publisher’s advance and occasional café shifts.

As the deadline neared, he wore a wrist brace to bed and sought relief through acupuncture due to the repetitive nature of the work. In addition to the illustrations, Ben created the font for the text by formalizing his own handwriting. He and his father took to calling the font “Heretica.”

Ben Nadler displays the technique he used in creating images for “Heretics!” Photos by Bryce Richter

Ben had the difficult challenge of finding concrete ways to illustrate abstract ideas, his dad says. The two strived to hit the right tone in both the narrative and the graphics.

The two communicated mostly by email.

“There was a lot we had to talk through,” Ben says. “How do you render God? How do you illustrate a soul?”

“We didn’t want to be too academic and dense, but we also didn’t want to be condescending or patronizing,” Steven says. “We decided that as long as the scholarship was accurate, we could take a few liberties with the illustrations.”

Steven says he noticed his son’s artistic potential early on. “Our daughter had a birthmark on her leg. Ben took a marker at age 4 and perfectly replicated it on his own leg.”

By high school at Madison West, Ben was taking private drawing lessons. He never considered anything other than art for college. 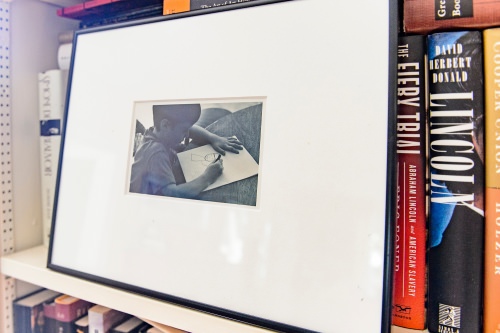 A photo of Ben Nadler drawing as a child. Photo: Bryce Richter

“I had total confidence in what Ben was going to do with the book,” his dad says. “When I started seeing the results — Wow.”

Though he’s written or edited 15 previous books, Steven says the publication of “Heretics!” offers a special thrill “because the success of this book is my son’s success.”

Critics are impressed. The National Post in Toronto, Ontario, calls the book “remarkable.” Publishers Weekly says it’s “a wonderful addition to the tradition of graphic nonfiction.” The Atlantic and the Los Angeles Review of Books have run excerpts.

The public reception also has been gratifying and suggests the book is introducing philosophy to a new audience, Steven says. Lots of young people are turning out for bookstore events, and the two have received many interview requests from general interest publications. The book was a hit at the recent Chicago Alternative Komics Expo — a first for the philosophy professor. 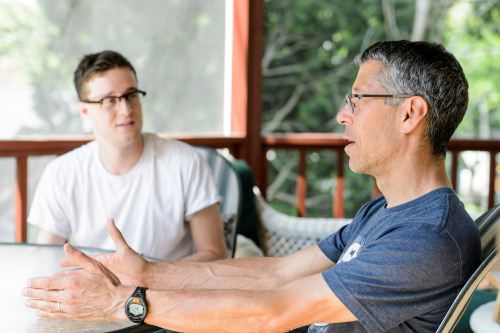 Steven Nadler (right) pitched the idea for the book to his publisher as a way to make philosophy more accessible and interesting to a broader reading public. Photo: Bryce Richter

Steven is returning to a traditional format for his next book, a biography of Menasseh ben Israel, a rabbi in 17th century Amsterdam who he says is arguably the most famous Jew in Europe of that period.

Ben has been hired by Princeton University Press to illustrate a graphic novel on the life of Socrates by Debra Nails, a philosophy professor emerita at Michigan State University.

After that, he’s open to another intra-family collaboration.