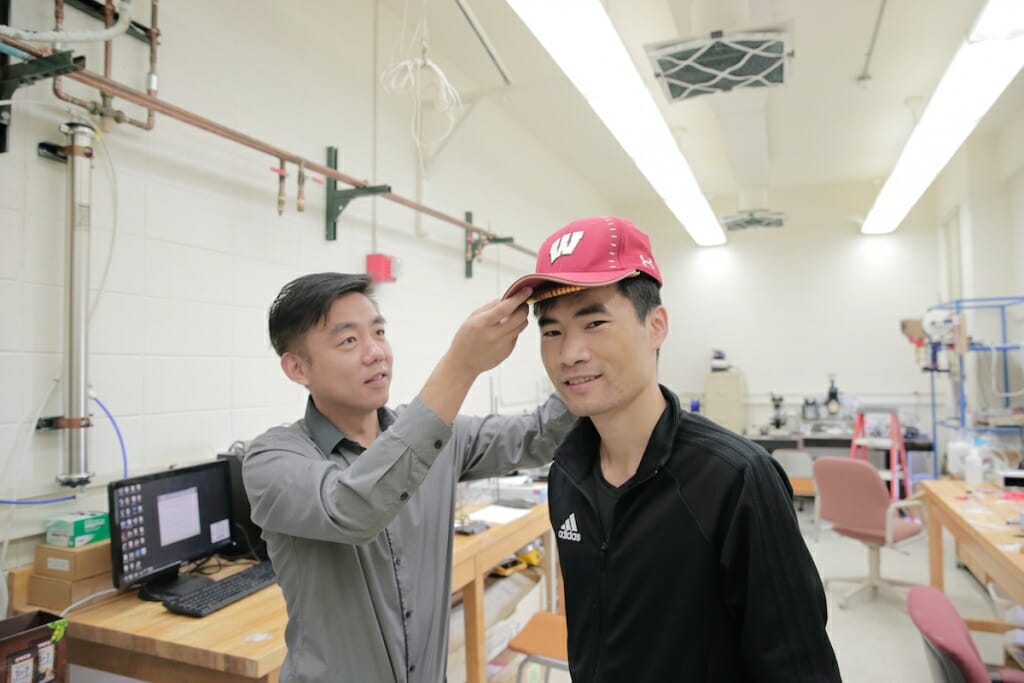 MADISON — Few things on earth strike fear into the hearts of men more profoundly than hair loss. But reversing baldness could someday be as easy as wearing a hat, thanks to a noninvasive, low-cost hair-growth-stimulating technology developed by engineers at the University of Wisconsin–Madison.

“I think this will be a very practical solution to hair regeneration,” says Xudong Wang, a professor of materials science and engineering at UW–Madison.

Wang and colleagues published a description of the technology in the journal ACS Nano.

Read more news from the College of Engineering

Based on devices that gather energy from a body’s day-to-day motion, the hair-growth technology stimulates the skin with gentle, low-frequency electric pulses, which coax dormant follicles to reactivate hair production.

The devices don’t cause hair follicles to sprout anew in smooth skin. Instead they reactivate hair-producing structures that have gone dormant. That means they could be used as an intervention for people in the early stages of pattern baldness, but they wouldn’t bestow cascading tresses to someone who has been as bald as a billiard ball for several years.

Because the devices are powered by the movement of the wearer, they don’t require a bulky battery pack or complicated electronics. In fact, they’re so low-profile that they could be discreetly worn underneath the crown of an everyday baseball cap. 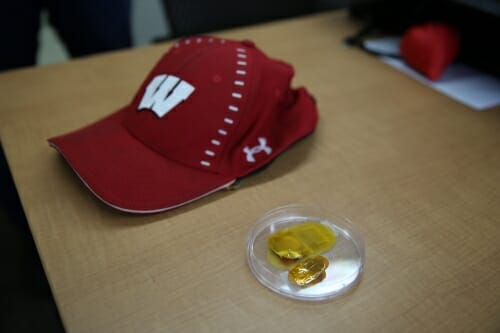 The device, right, is shown along with a baseball cap used to cover it. UW-Madison photo by Alex Holloway

Wang is a world expert in the design and creation of energy-harvesting devices. He has pioneered electric bandages that stimulate wound-healing and a weight-loss implant that uses gentle electricity to trick the stomach into feeling full.

The hair-growth technology is based on a similar premise: Small devices called nanogenerators passively gather energy from day-to-day movements and then transmit low-frequency pulses of electricity to the skin. That gentle electric stimulation causes dormant follicles to “wake up.”

“Electric stimulations can help many different body functions,” says Wang. “But before our work there was no really good solution for low-profile devices that provide gentle but effective stimulations.”

Because the electric pulses are incredibly gentle and don’t penetrate any deeper than the very outermost layers of the scalp, the devices don’t seem to cause any unpleasant side effects. That’s a marked advantage over other baldness treatments, like the medicine Propecia, which carries risks of sexual dysfunction, depression and anxiety.

“It’s a self-activated system, very simple and easy to use,” says Wang. “The energy is very low so it will cause minimal side effects.”

The researchers have patented the concept with the Wisconsin Alumni Research Foundation, and they hope to move forward with human testing soon.