A group of University of Wisconsin–Madison students piles into an 11-seat vehicle, opting for a smooth shuttle ride up Observatory Drive instead of a long walk to the Sewell Social Sciences Building.

The vehicle steadily treks eastward at about 15 mph, following its high-definition base map and watching out for obstacles with lidar sensors rather relying on a driver — because there isn’t one.

While that remains a hypothetical scenario at the moment, it’s one that could become a reality in the not-too-distant future as part of the array of autonomous and connected vehicle research emerging from the UW–Madison College of Engineering. 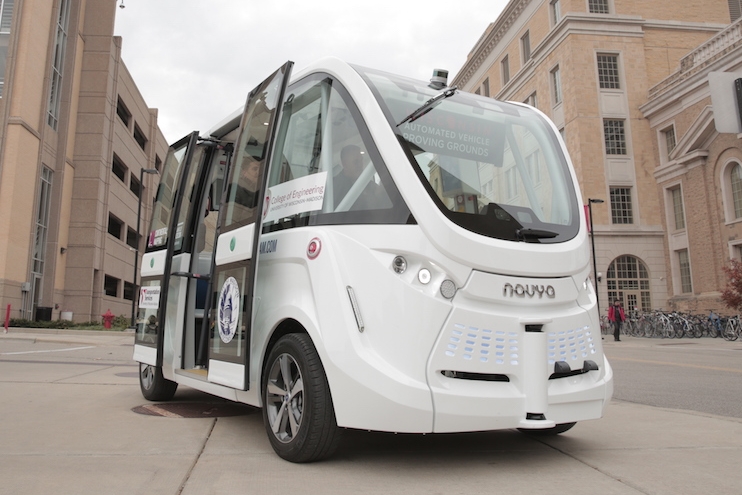 The Navya autonomous shuttle was on campus in November 2017 for a public viewing. Photo: Renee Meiller

The college, which is leading the federally designated Wisconsin Automated Vehicle Proving Grounds collaboration (WiscAV), will host one such autonomous vehicle on campus April 24 and 25. Members of the public can ride in an Autonom Shuttle, made by the French company Navya, from 9 a.m. to 3 p.m. both days. Rides will start outside the west side of Russell Laboratories, 1630 Linden Drive, and follow a loop covering parts of Linden, Elm, Observatory and Babcock drives.

Researchers from the College of Engineering will be on hand to discuss their work and the latest developments in an evolving industry.

“A big part of our work as the proving grounds — especially as a more public-based, university-based proving grounds compared to the private test tracks — is getting people comfortable with this new technology that’s coming very, very fast, whether agencies or regulators are ready for it or not,” says Peter Rafferty, a program manager in the Traffic Operations and Safety Laboratory and one of the leaders of WiscAV. 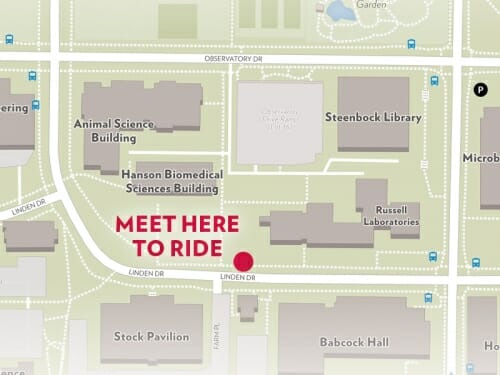 Rides will start outside the west side of Russell Laboratories, 1630 Linden Drive, and follow a loop covering parts of Linden, Elm, Observatory and Babcock drives.

Rafferty and researchers in the TOPS Laboratory are helping drive autonomous and connected vehicle research through projects like a partnership with the City of Madison to test connected vehicle technology on South Park Street. The laboratory also houses a full-scale driving simulator.

But work in the area involves researchers from across the College of Engineering and the UW–Madison campus.

“A big part of our work as the proving grounds … is getting people comfortable with this new technology that’s coming very, very fast, whether agencies or regulators are ready for it or not.”

“Autonomous and connected vehicles are going to transform society,” says Jon Riehl, a researcher in the TOPS Laboratory. “So our work here is a perfect example of the Wisconsin Idea in action.”

American Family Insurance, a longtime supporter of UW–Madison, is among the lead sponsors for the event, along with the Department of Civil and Environmental Engineering and UW–Madison Transportation Services.

“As autonomous and connected vehicle technology advances, it will have a tremendous impact on the customers and communities we serve,” says Nyra Jordan, American Family’s director overseeing the company’s corporate responsibility and sustainability efforts. “It’s critical that the experience is safe for users, which is part of the reason this research is so important. This technology will enhance the future of mobility and reduce the environmental impacts associated with transportation. It’s an exciting collaboration with UW–Madison.”