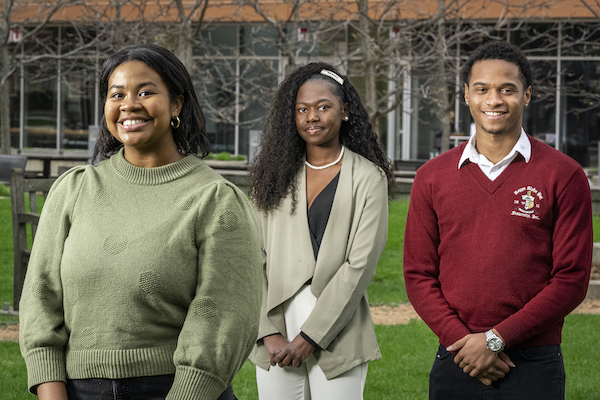 Nyla Mathis remembers her heart fluttering, like a first crush.

She was a freshman back then, attending her first event sponsored by one of the historically Black sororities on the UW­–Madison campus.

“I was a little nervous, because all of these women were so distinguished and so high-achieving,” says Mathis, now a senior. “But they were also so down-to-earth and relatable. It immediately felt like home.”

It’s an experience many Black students on the predominantly white UW–Madison campus say they share. They’ve found support, acceptance and community through membership in a Black sorority or fraternity.

Although Black fraternity and sorority chapters have existed on the UW–Madison campus for many decades — the first were chartered here in 1946 — the organizations are sometimes little known to the larger campus. That’s about to change.

On April 24, university and student leaders will dedicate space for the Divine Nine Garden Plaza project on East Campus Mall. The Divine Nine refers to the nation’s nine historically Black Greek-letter fraternities and sororities, of which six are currently active at UW–Madison. The National Pan-Hellenic Council (NPHC), founded in 1930 at Howard University, oversees and nurtures chapters at universities across the country.

The campus project will create a garden space and install historical markers recognizing the contributions of the NPHC at UW–Madison. The site, currently a grassy area with park benches, is across East Campus Mall from the Walgreens on West Johnson Street.

“It’s a great location,” says Kayla Cotton, a senior from Milwaukee and president of the NPHC at UW–Madison. “It’s the heart of campus, so a lot of students walk through there every day and will see this.”

That’s important, because representation matters, says Israel Oby, a senior from Madison and a member of the Beta Omicron chapter of Kappa Alpha Psi Fraternity, Inc.

“I think adding a physical landmark for the National Pan-Hellenic Council will do wonders for Black students here in making them feel like they belong,” Oby says. “It also would help prospective students see that the school is trying to represent Black students and students of color in a better way than it has before.”

Although Black fraternity and sorority chapters have existed on the UW–Madison campus for many decades — the first were chartered here in 1946 — the organizations are sometimes little known to the larger campus. That’s about to change.

Due to the pandemic, attendance at the ceremony on April 24 will be by invitation only. Others are invited to watch a livestream of the event beginning at 2 p.m. Central Time. The link can be found here.

The idea for the project had long been identified as a need by UW’s Fraternity and Sorority Life community. It gained important momentum with involvement from the Student Inclusion Coalition (SIC), seven of whose eight founders are affiliated with NPHC. The campus group formed in response to a 2019 homecoming promotional video that excluded the Epsilon Delta Chapter of Alpha Kappa Alpha Sorority, Inc., members who had participated in the filming. SIC issued a list of demands, including greater visibility on campus for Black organizations such as sororities and fraternities.

“It’s great to see that when we come together as students and speak up, we can make things happen,” says Oby, who was among the co-founders of SIC.

The Divine Nine Garden Plaza project is a joint effort among SIC, UW’s National Pan-Hellenic Council and the UW administration.

“The commitment of our student leaders to seeing this project through and the community support they’ve experienced getting to this point has been incredible,” says Lori Reesor, vice chancellor for student affairs. “This new space will be an important reflection and celebration of the NPHC legacy that lives on today at UW–Madison.”

Student Affairs has launched a fundraising campaign to create the garden plaza, which is estimated to cost about $250,000. So far, about $35,000 has been raised. Information on donating can be found here.

“I really believe this will bring greater awareness to Black Greek life in general and to all of the amazing things Black sororities and fraternities have achieved on this campus.”

Mathis, a SIC co-founder and president of the Epsilon Delta Chapter of Alpha Kappa Alpha Sorority, Inc., recalls meeting in a library with fellow group members in the fall of 2019 to draft the demands.

“It’s truly incredible to see this happening already,” says Mathis, of Milwaukee. “We thought it would be 10 years down the road.”

On move-in day as a freshman, Mathis says she watched anxiously for other students who looked like her to arrive at her residence hall, only to end up feeling isolated. Her sorority, she says, is a place where she can be completely herself. Her sorority sisters also share her values, such as civic engagement and academic achievement, she says.

The Divine Nine Garden Plaza Project is expected to be completed in late fall. Cotton, a member of the Epsilon Delta Chapter of Alpha Kappa Alpha Sorority, Inc., says she plans to come back for the unveiling regardless of where she is living.

“I’ll be so excited to see it finished,” she says. “I really believe this will bring greater awareness to Black Greek life in general and to all of the amazing things Black sororities and fraternities have achieved on this campus.”